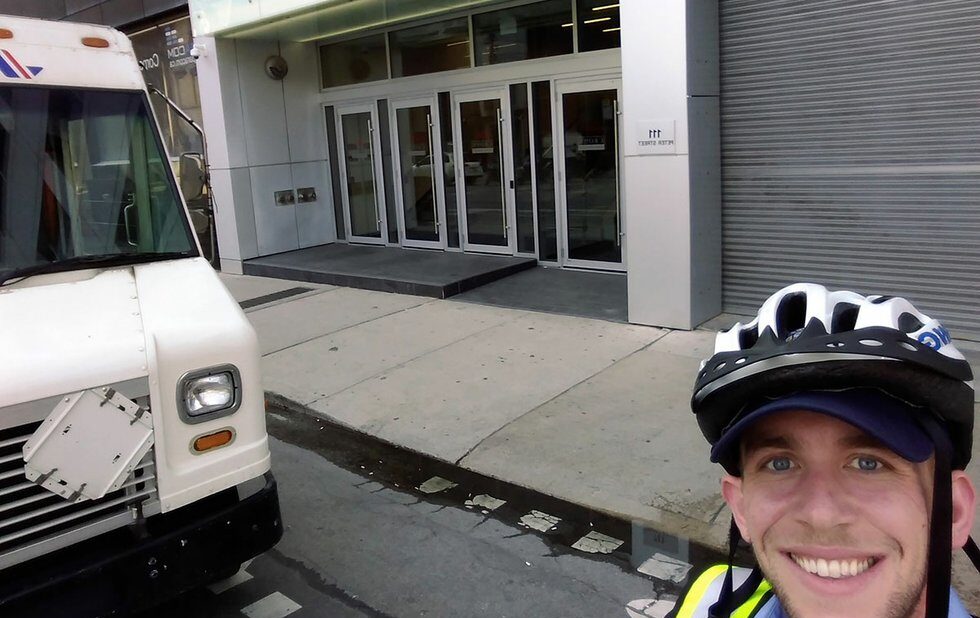 When it comes to cyclists and motorists sharing the road, it’s Battle Royale in Toronto. Cyclists routinely zip in and out of gridlocked traffic. Delivery trucks routinely stop in dedicated bike lanes. And taxi cabs seem to do whatever they want.

So the recent announcement of a Toronto Police Services parking enforcement officer dedicated to monitoring bike lanes only comes as a relief – at least to cyclists who rely on bike lanes to feel safe.

Kyle Ashley, a parking enforcement officer with Toronto Police Services, is the two-wheeled hero we’ve been waiting for. The 29-year-old officer is an avid cyclist and passionate about community engagement. He lives in Toronto with his fiancé Dean Sela and their dog Kijiji.

Since Ashley is highly active on Twitter, we decided to do a Q&A over Twitter direct message to get to know him better.

How long have you been a Toronto Police officer and what is your job?

I’ve been on the job for 3.5 years. I started the day after my birthday in 2013. I am a bicycle trained parking officer with a special interest as a cyclist.

How did the decision come about that you would only deal with motorists in bike lanes?

I truly believe it came from the community engagement with the cycling community over Twitter. It was only on May 15 that I was trained by the police college to engage with the community. The ways in which a parking officer can interact are limited, as we often deal with large amounts of negative interactions.

One of the passions I developed working for the Toronto Police was the satisfaction and appreciation I got from enforcing bike lanes. So, at the police college, I sent out a tweet about where TPS could be doing better in terms of enforcement in bike lanes. I asked people to tell me where the worst areas were. From there, I listened to the community and created a map of the worst areas with the worst complaints. Later I spoke to my officer in charge, Brian Moniz, about the feedback I was getting, and we discussed the possibility of exploring this endeavor.

Toronto Police is modernizing and one of the key tenets of community policing is engagement.

You announced your job on Friday. Since then, how many tickets have you handed out?

Today was my first day out on the road. I was engaged in many appearances today, so the measure of what a full day looks like isn’t yet clear. However, I spent about an hour on College and wrote about 10 tickets.

What is the reaction from motorists when you give them a ticket?

Some people genuinely do not know. Signs can be confusing. However, most motorists have encountered one of our yellow tickets before, so they know the risk they are taking. I would say that most encounters are very frantic and argumentative. People don’t see the bigger picture about safety.

What is the current fine for stopping in a bike lane?

$150 and a tow if I can get there on time. But these encounters are very brief, which is what makes them so dangerous. People run in and out of coffee shops and stores.

Is the fine the same for taxi cabs and delivery trucks? I always see them parked in bike lanes downtown.

Yes, and they accept it as a cost of business. I am also calling them out directly. Canada Post, for example, Fed Ex and Garda World…

I’m out Monday to Friday for four or five hours and then I’m tweeting/engaging for three hours. I am going to try to be out at different times to meet different people and see different areas.

Why do you care so much about cycling?

I grew up in farmland outside a town called Arthur and moved here four years ago. Toronto was my first experience at road cycling in a city. The Cycle Toronto and #BikeTO community has given me so much purpose.

I never really wanted any notoriety. I just wanted to do my job, but now I feel I have a responsibility to further fight for the people I serve.

What’s the best way for people can notify you if they see a car in a bike lane?

Calling the 311 for a dispatch of an officer is best because that’s immediate.

If people want to let us know of certain areas or companies, they can tag me in pictures on Twitter or send me a message over Twitter. I’ve been going to where people have previously said are hotspots.

Any tips for drivers or cyclists?

Be kind to each other and share the road. Be safe and get to where you need to go. Everyone has a responsibility to be a safe and courteous operator.