NOW MagazineNewsWhy are the cops so interested in pushing their way back into Pride?

Why are the cops so interested in pushing their way back into Pride?

Maybe it’s time to rebrand Pride as “John Tory and His Cops Pride,” at least we’d know what we were going to 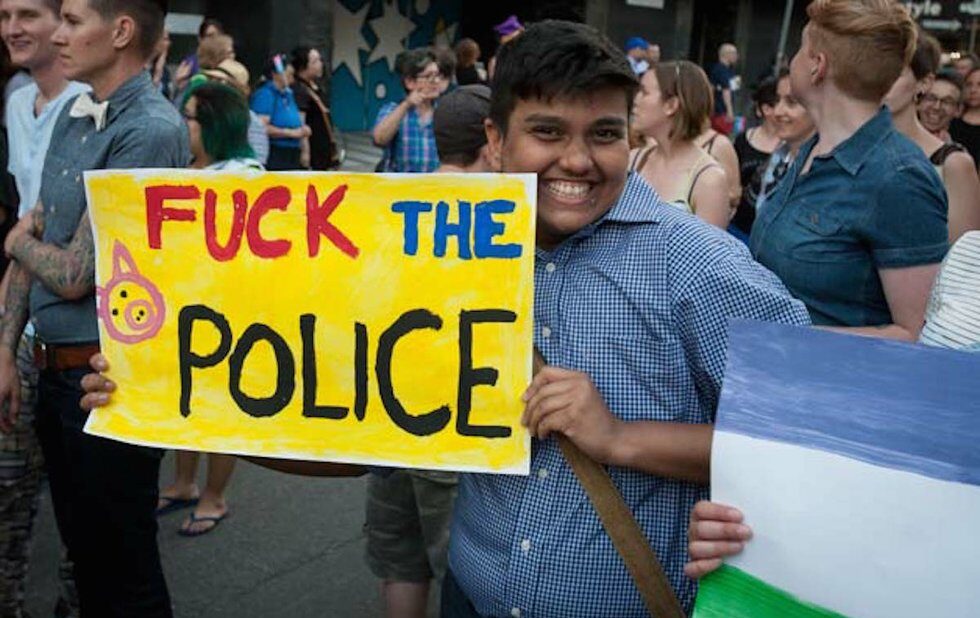 Sandwiched between two much larger men – Police Chief Mark Saunders and Mayor John Tory – Pride Toronto Director Olivia Nuamah read her lines. After “consultations” with police and the community, she said at an October 16 press conference, the Pride board of directors had decided it was time to permit the Toronto police to once again participate in the parade, and that they would be encouraged to submit their application.

There may indeed have been meetings with the police, but no one in the community had heard about them, not even Pride’s membership.

There had been several large public meetings in the fall of 2016 and again at the Pride Annual General Meeting in 2017, at which the membership had voted to support the demands of Black Lives Matter – Toronto, including a ban on police floats and armed, uniformed contingents in the parade.

Community members were blindsided by Pride’s reversal, as was amply illustrated by the reaction of the AIDS Committee of Toronto, hardly a radical organization. Its official response expressing “disappointment” with Pride’s decision states simply: “There is no pride in policing. The police should not be allowed at the Pride parade. At least not yet.

“What improvements have the Toronto Police Services made over the past two years to establish a better relationship with the LGBTQ community?”

ACT’s statement goes on to answer that question. “Let us not forget the bathhouse raids in 1981, the Pussy Palace raid in 2000 and Project Marie in 2016, when the police focused resources to arrest men in a Toronto park at the same time they were ‘expressing regret’ for the bathhouse raids and dedicating a mural in the Church Street Village.” Not to mention the police’s failure to respond to community concerns about the serial murders targeting vulnerable gay men in the Village over a period of eight years.

There were only veiled allusions to that by Nuamah at the press conference – or, for that matter, the issues that led to the BLM–TO protests that succeeded in getting the cops out of the parade after 2016.

The police may have finally arrested Bruce McArthur, but there continues to be little accountability for police shootings or police harassment of Black community members – straight, queer and trans.

Since 2000, 36.5 per cent of Torontonians killed by police are Black men and boys. To put that into context, the Black community makes up just over 8 per cent of the city’s population. It appears that when it comes to Pride, Black lives really don’t matter.

Why, then, defy the repeated position of Pride’s membership? Was this strong-arming by the mayor using city funding as the lever?

Tory has been adamant about his desire to see cops back in the parade. In fact, he has a history of fancying himself the arbiter of who should or should not march in Pride.

During his first election campaign, he threatened to cut city funding if Queers Against Israeli Apartheid were allowed to march.

Pride’s announcement came a week before city elections, giving Tory some valuable publicity in the midst of his campaign.

Some in the community see Tory as an ally. And Pride is taking no chances on its unruly membership upending its cozy relationship with the mayor.

For example, new rules have been put in place for the upcoming AGM on December 4. No non-members or press will be allowed into the meeting. Even members in good standing must RSVP in advance if they want to attend. The meeting is also being moved well out of the Village, where it has been traditionally held, to Harbourfront.

This is voter suppression. Then again, this is nothing new.

At its AGM in January 2011, Pride “forgot” to enter as voting members most of the volunteers involved in Blockorama, the Black and West Indian event at the festival. Blocko had earlier that year called out Pride for its racism.

Why are the cops so interested in pushing their way back into Pride anyway?

Given all the bad press they’ve received about continuing racism and homophobia, they need to squeeze a little good PR wherever they can.

The city has already taken over and rebranded Caribana, Toronto’s other big summer tourism money-maker. Couldn’t let Black community politics interfere with the marketing strategy. Maybe it’s time to rebrand Pride as “John Tory and His Cops Pride.” At least we’d know what we were going to.