The chief has few answers on how police are abiding by the city's don't ask, don't tell policy on undocumented immigrants 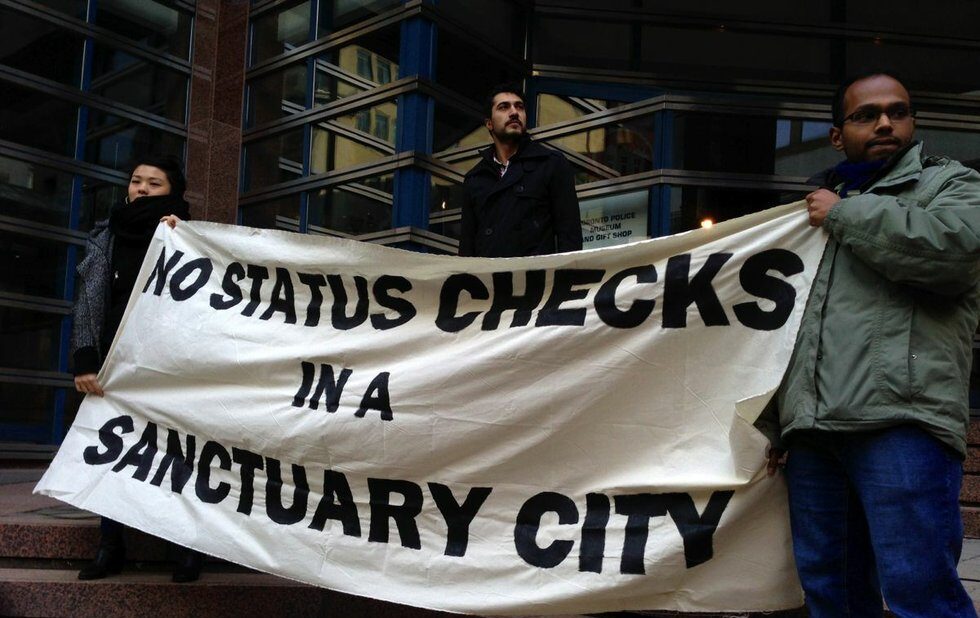 Chief Mark Saunders’s report to the Police Services Board on how Toronto cops are dealing with people who don’t have legal status leaves many questions unanswered.

City council, having reaffirmed its commitment to being a Sanctuary City in a highly publicized photo opportunity at City Hall following the announcement of Trump’s travel ban on January 31, wanted to know if the police were following the board’s policy.

The answers Chief Saunders provided to the board at its regular monthly meeting on March 23 offered little clarity.

In place since 2006, the policy states that “non-documented residents” will “have equal access to policing services without the fear that contact with the police will lead to inquiries about their immigration status.” Developed at the urging of the advocacy group No One Is Illegal, the policy directed the chief to develop procedures to ensure that “victims and witnesses of crime will not be asked their immigration status unless there are bona fide law enforcement reasons to do so.”

Only one board member, Councillor Shelley Carroll, had any good questions for the police chief.

For example, she wanted to know whether victims of human trafficking, such as sex trade workers, ought to feel safe going to police without fear of being reported. She also wanted to know under what circumstances police officers would conduct a check on someone on CPIC, the national crime database.

When the chief had no answers, Carroll moved a motion passed by the board to defer consideration of the report until May, when the chief would come back with answers.

According to a 2015 study University of Ottawa professor David Moffette conducted for No One Is Illegal, Toronto police contacted the Canada Border Services Agency (CBSA) more than 3,200 times in an eight-month period, and at least 80 per cent of those calls were checks of immigration status.

A February 2017 study led by Ryerson University criminology professors Graham Hudson and Idil Atak – (No) Access T.O.: A Pilot Study On Sanctuary City Policy In Toronto – concluded that “the Toronto Police Service has not fully complied” with the board policy and has often “flagrantly” ignored it.

Not according to the chief.

He claims in his report that the Immigration And Refugee Protection Act (IRPA) was identified as a significant component in only 684 of more than 747,000 general occurrences (G.O.s) that police dealt with between 2014 and 2016. This leaves the impression that an individual’s legal status mattered in a very small number of incidents.

That’s well and good, but the circumstances under which immigration status arose remain hazy.

Saunders’s report claims that the “majority of these stem from investigations into an unrelated offence or infraction, whereby the IRPA infraction is discovered as a secondary component.”

Some of the report’s own explanations raise questions.

It says that “of the G.O.s noting an IRPA component, 25 per cent are attributed to the Repeat Offender Parole Enforcement, the Bail and Parole, and the Fugitive Squad units. These units work with the CBSA to execute existing warrants and to locate persons wanted under the IRPA.”

Say what? We can understand the Fugitive Squad collaborating with the CBSA, but why the other two units?

The IRPA does require that a peace officer must execute an immigration warrant. It appears from Saunders’s report that Toronto police work proactively with the border security folks. The report actually celebrates the partnership between Toronto police and the federal agencies. “The service, as a member of the law enforcement and public security community, respects and supports the mandate of other law enforcement agencies like the CBSA,” it reads.

“Through this collective grouping of legislation and the obligation to support the CBSA’s mandate, the service is duty-bound to share personal information with the CBSA. The service is satisfied that the existing legislative and regulatory framework is adequate to ensure a lawful and bias-free relationship with the CBSA with regards to information sharing.”

The statement reveals the extent to which our local police, a group that residents of this city pay for, have become embedded in the needs and interests of a national security state.

If that’s what IRPA requires and the hands of Toronto police are tied, the police board and the city should be asking if the feds are riding on the backs of our municipal police and making our officers do their work.

And what does that do to the claim of being a Sanctuary City?

No One is Illegal policing This week in NOW Toronto police