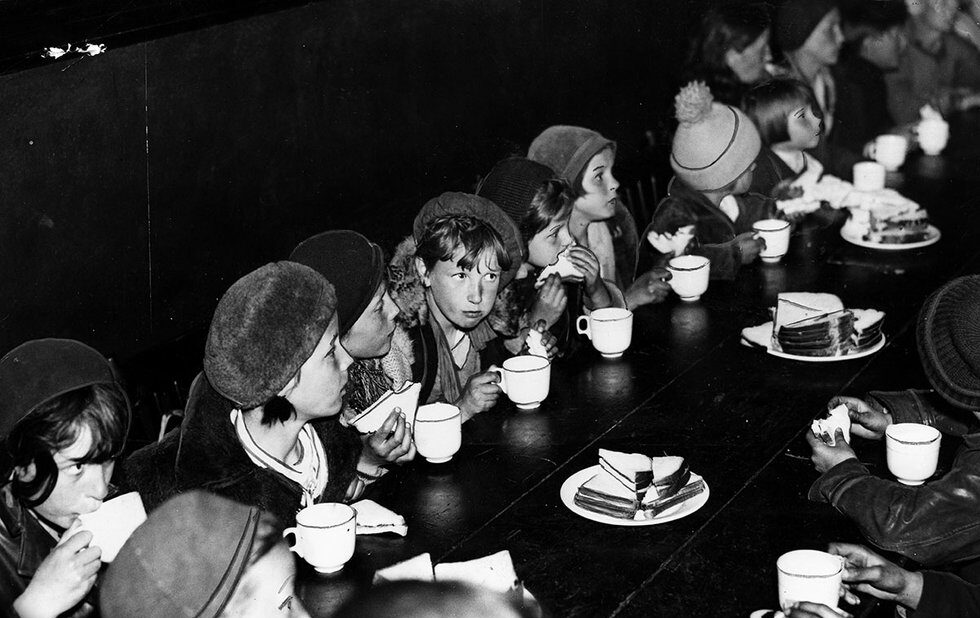 Thousands of people on social assistance in Toronto are being left destitute, unable to access funds to acquire basic necessities like dressers, mattresses, bedding and kitchen utensils since the province changed the funding formula for grants to municipalities to address homelessness in 2013.

In 2015, only 24,500 people on social assistance in Toronto were able to get money from the Housing Stabilization Fund, while 49,000 got funds in 2012 from the provincial program it replaced.

Poor people’s struggles for basic necessities in Toronto today mirror the militant resistance of the unemployed in the 1930s. In this edited excerpt from Toronto’s Poor, A Rebellious History (Between the Lines), authors Bryan D. Palmer and Gaétan Héroux, describe an April 3, 1935, march on Queen’s Park by 3,000 people that sprang from riots in York Township and other mobilizations around the province.

Led by Communists A.E. Smith of Toronto and Ernest Lawrie of Long Branch, organizations from as far west as Oakville marched separately and then fused these feeder parades into one massive march composed of Workers’ Associations from Long Branch, Mimico, New Toronto, East York, York Township and Toronto proper.

Songs rang along the route as the protesters paraded under the banner “United We Eat. Divided We Starve.”

Police prepared for the onslaught. A cable barricade was erected on the front lawn of the Legislature. Inside, uniformed officers protected all doorways and patrolled the halls. Queen’s Park resembled a fortress. 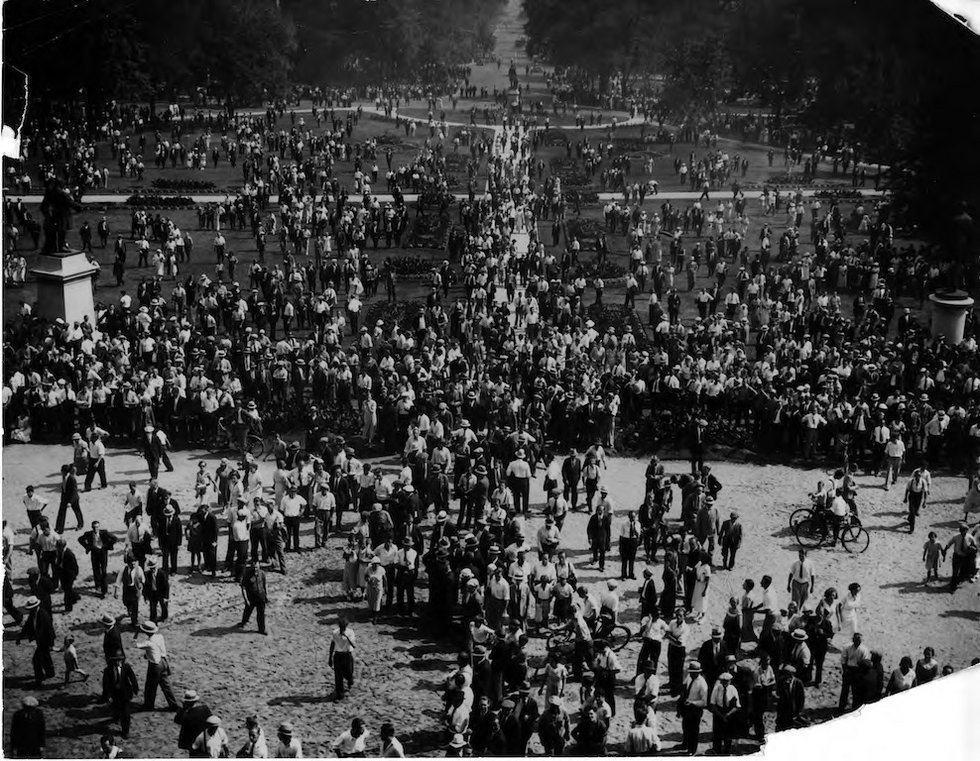 “Hunger marchers” completing the last lap of their trek to Queen’s Park circa 1935.

Premier Hepburn explained, “They sent us a demand – not a request – that they be allowed to speak from the floor of the House. Of course, we couldn’t allow that, but when we refused that demand we heard rumours of the threats they made. We have it on good authority they threatened to force their way in and create as much of a disturbance as possible.”

But to placate the protest, Hepburn agreed to meet a small delegation of 12 from the various Workers’ Associations. Two cabinet ministers, [David] Croll and [Arthur] Roebuck, would also be present during the meeting.

The unemployed wanted relief rates raised by 50 per cent, money to purchase household necessities like bedding, a stop to evictions, higher rent allowances and amnesty for those recently arrested at unemployed protests in York Township and the New Toronto police station occupation.

Hepburn was adamant that there would be no raising of relief, the Liberal premier taking his cues from his Conservative prime ministerial counterpart.

“I was at a relief conference… with Premier [R.E.] Bennett when he said the standard of living of the unemployed was rapidly reaching that of those getting wages. That was the reason he cut down payment to the province. We took up the slack.”

Indeed, Hepburn implied that the jobless were doing fine under current relief administrations. Protests, demonstrations and disturbances were unheard of in many Toronto districts, he said slyly, suggesting that where there was the smoke of conflict, there was likely the fire of Communist agitation.

Both Croll and Hepburn were insistent that the province had investigated thoroughly any claims of child malnutrition and had never found “one case.”

Croll took on the issue of evictions and passed the buck to the municipalities, which he bluntly said were “shirking their responsibility in finding housing for the unemployed.” 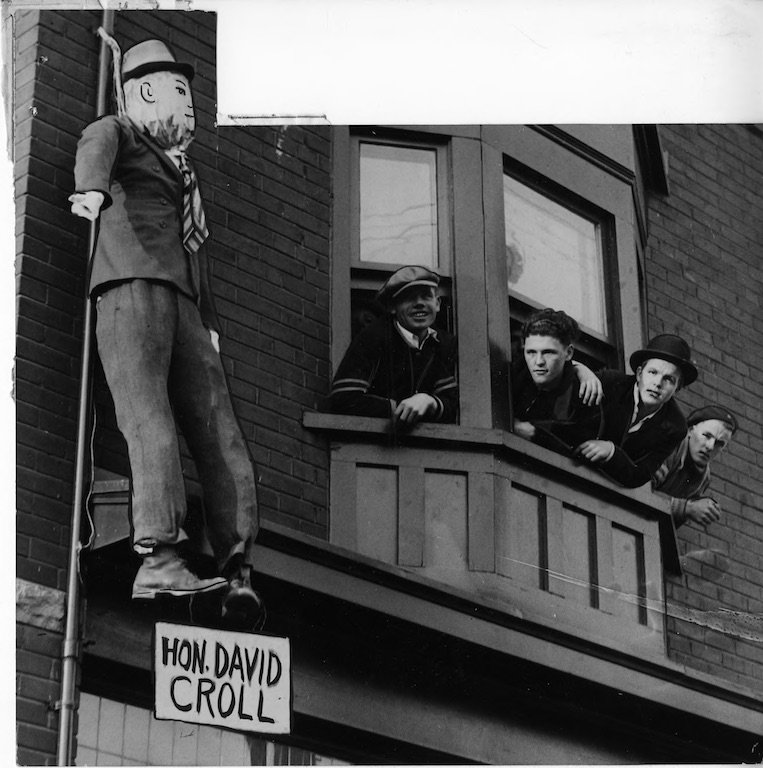 Welfare minister David Croll strung in effigy from provincial relief office occupied by New Toronto’s “Army of Occupation” protesting the relief cut of 10 per cent circa 1935.

Hepburn conceded that evictions posed a serious problem and noted that he was willing to arrange a conference with municipal authorities to address the issue. Similarly, he and Croll agreed that the lack of bedding among Ontario’s relief-dependent poor necessitated a response on the part of the state. They made a vague commitment to accompany the jobless on a tour of their living quarters 20,000 mattresses were later distributed across the province.

The jobless got some small concessions to sleep on, to be sure, but the bulk of their demands were rejected and deflected by the three wise men of Ontario’s governing Liberal Party.

If the Workers’ Associations’ April 1935 march on Queen’s Park netted the poor some minor achievements, it was also used to accumulate ideological capital in the camp of the state.

Croll’s response to the meeting was not so much to recognize that conditions among those receiving relief were deplorable, but to lambaste the working-class districts of Toronto for “playing ball” with Communist agitators, escalating social conflict and generating civic turmoil.

“Lately there have been demonstrations and disorders in certain municipalities,” Croll said. “Let me assure you that those incipient riots did not occur spontaneously. I am well aware these parades and make-believe sieges were covertly organized by two-cent revolutionaries. Those Lilliputian Lenins are not good, hardy radicals with a broad vision, but niggardly obstructionists with delusions of grandeur.”

Croll’s rant contained reference to like happenings in the Niagara Falls area. There, in Crowland, 900 of the peninsula town’s 3,000 residents, many of whom were ethnic, immigrant workers, were on relief.

As in Toronto, their complaints reached a fever pitch in the spring of 1935. A massive relief strike rocked the small town. The situation of the Crowland relief strikers was, if possible, even more dire than the conditions facing the Toronto unemployed.

In an effort to keep children from suffering malnutrition and worse, the relief strikers sent 41 of their sons and daughters to Toronto on April 24, 1935. The Communist-led National Unemployed Council made arrangements to billet the children with members of Toronto’s various Workers’ Associations. The youngsters were fed at the Ukrainian Farmer-Labour Hall.

When a Toronto parade of Crowland relief strike children called attention to the plight of the poor, Hepburn threatened to have the parents of the hungry boys and girls arrested for violating truancy regulations.

The government wielded a particularly heavy hand of coercion and refusal, insisting that if relief strikers continued to boycott work, they should be cut off all support. Communist agitators were indeed on the scene. When Toronto Communists came along with the Crowland leaders of the relief strike to negotiate with Hepburn, the premier would have no truck with the Reds.

After six weeks of struggle, the Crowland relief strike was broken, leaving a bitter taste in the mouths of the unemployed and intensifying Hepburn’s loathing and scapegoating of Red agitators. Two of the Crowland relief strike leaders, Frank Haslam and William Douglas, both known Communists, went to jail for 15 months, convicted of inciting to riot and being members of an unlawful assembly.

Globe and Mail article on relief strikers demonstration in York Township circa 1935.