“The shelter crisis is making our women sick, exhausted and at risk of violence and premature death, and this must end.” 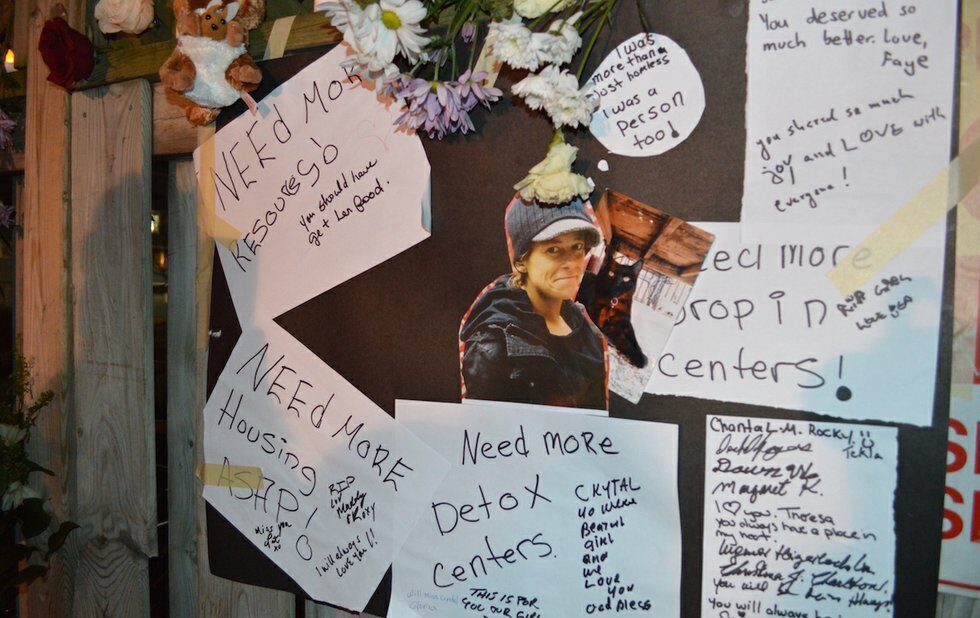 Housing advocates and friends held a vigil Thursday, January 10, to remember Crystal Papineau just metres from where she perished two days earlier, trapped inside a steel clothing donation box behind a high-rise on Dovercourt. She was 35.

A makeshift shrine of candles and personal messages on Bristol board takes up space by a fence where the bin once stood. It was removed after Mayor John Tory called for a review of locations and design of the city’s donation boxes.

Papineau’s death has left a hole. “The night Crystal died, the women’s shelter system was filled to capacity and the drop-in system was also over-capacity,” says Lesley Wood, one of the vigil organizers. “The shelter crisis is making our women sick, exhausted and at risk of violence and premature death, and this must end.”

According to friends, Papineau frequently had trouble accessing the shelter system and resorted to using dry clothing from the donation box to keep warm. Patricia O’Connell, executive director of Sistering, the multi-service agency and drop-in for homeless and at-risk women on Bloor, knew her well. Papineau was at Sistering in the hours before she died.

“She was talking with her friends and then around two o’clock in the morning she said she was going to the bin and that’s the last time people saw her,” says O’Connell.

Friends and frontline workers say Papineau was a caring, generous person “who would give the last bit of her money to help out someone else in desperate times.”

Tory Young, a former neighbour when Papineau was off the street for a while and living in Parkdale, says she loved to read and borrowed books from him “left, right and centre.” Young recalls seeing her often with a pad and pencil, writing and drawing.

Young says she came to live in his building through an agency. “I knew her as this young, sober woman fighting to get her life back,” he says. “Unfortunately the agency didn’t step up to the plate when she really needed the help.”

According to media reports, Papineau was evicted from the building a few years ago for “retaliating” when “her friend was assaulted.” The charges against her were eventually dropped, but Papineau had trouble finding new housing after that.

Street nurse Cathy Crowe of the Shelter and Housing Justice Network wants the city to add another 1,000 shelter beds in 2019 to the several hundred already scheduled to be opened this year.

In an open letter to the mayor and Toronto councillors in December, the network appealed to city hall for “compassion and political will” to end homelessness in the city.

“With each passing year, more and more people are becoming trapped in the emergency shelter system for extended periods of time, with no access to affordable housing or the supports they require to move forward.”

The letter signed by frontline organizations and service providers demands the city issue a state of emergency and, with the support of senior governments, commit to investing in 5,000 new rent-geared-to-income housing and supportive housing units annually to deal with homelessness. The city reports that 145 people experiencing homelessness died between January 1, 2017 and June 30, 2018.

Crowe says part of the reason homeless deaths continue to be in the headlines is because “we have councillors in the suburbs who think it’s not their problem, that it’s a downtown problem.”

The 20-year Poverty Reduction Strategy approved by council in 2015 is not doing enough, O’Connell adds. “Poverty is around us. Working people in Toronto can’t afford to even rent an apartment now.”

Papineau’s name will be added to the Homeless Memorial by the Church of the Holy Trinity in February.