Calling out the Toronto Sun’s Islamophobia 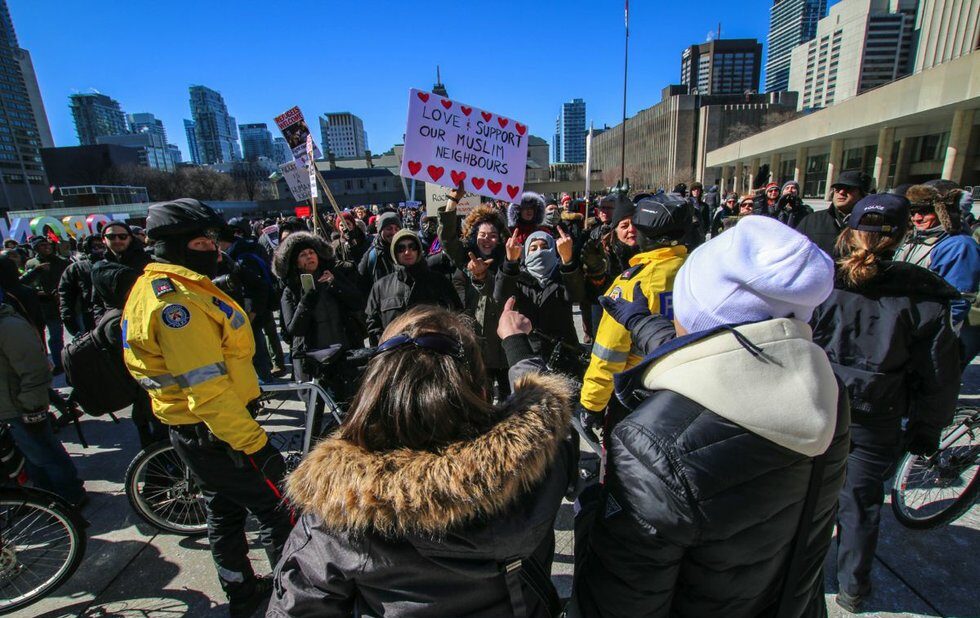 While the expression “fake news” has been appropriated by President Donald Trump to dismiss the mainstream media, the term’s misuse papers over the reality that fake news has indeed existed for a long time – often in the form of the tabloid press.

American politicians were lamenting the scourge of “invented occurrences” as far back the late 19th-century during the media rivalry between William Randolph Hearst and Joseph Pulitzer, whose respective newspapers would publish stories that were outrageous and salacious – and which (it’s rumoured) led to war and assassination. Since the migration of news online, the consequences can be far more sinister than the term “clickbait” implies.

In Canada, there are a few culprits to highlight, chief among them the Post Media-owned Sun Media chain. It’s become all-too-common for the Sun’s various iterations around the nation to engage in smear campaigns, the reporting of conspiracy theories and the spreading of false information about communities and individuals, in particular, Muslim communities.

For instance, late last month a trio of figures on the local far-right scene visited a Scarborough hotel housing refugees from Nigeria to film an “exposé” on “Trudeau’s refugee hotel,” allegedly “to determine if rumours of the migrants (sic) destructive behaviour are true.” Turns out they weren’t.

But that didn’t stop fringe mayoral candidate Faith Goldy from showing up a couple of days later to hold a press conference in front of the hotel, during which she pledged to evacuate “all illegal migrants” from the city.

Shortly after Goldy’s visit, Sue-Ann Levy got into the act, writing a piece published by the Sun online that animal services need to be called because “some goats were being slaughtered.” The basis of that information? A TripAdvisor review that proved to be false.

Within hours of both Goldy’s visit and the publication of the Sun’s story, a hotel maintenance worker discovered a lit gasoline canister on the hotel’s third floor. Emergency crews were called to the hotel at 10:30 pm.

It’s not the first time Sun and Levy has stoked fears about refugees and other vulnerable minorities. Following the Danforth shooting in July, she was taken to task on social media for tweeting her “guess” that the shooter could be a refugee. Fellow Sun columnists Anthony Furey and Candice Malcolm also weighed in promising to “get to the bottom of what really happened,” contrary to whatever police and city officials were saying about the shooting.

At this past year’s Canadian Association of Journalists conference, Toronto Sun editor-in-chief Adrienne Batra, who is a woman of colour, was invited to talk about how to “diversify” newsrooms. She is frequently invited to sit on panels at journalism conferences and other prominent civic organizations. From time to time, Batra is also invited to participate in discussions on the CBC. The public broadcaster is mandated “to reflect the multicultural and multiracial nature of Canada.”  How does Batra, whose newspaper daily attacks those concepts, fit in? Or do people just not recognize the damage this outlet does to people’s sense of safety and well being?

During the last provincial election in Ontario, a leaked memo from the Sun made it clear the editorial team viewed efforts to address inequality as part of “culture wars” in the province.

Of course, none of us have to buy the Sun or click on its stories online. We certainly don’t have to pretend that its content actually meets real journalistic standards set out by the National NewsMedia Council, of which the Sun is a voluntary member.

But it’s not okay to pretend that this is a media outlet like any other.

Conservative politicians ignored the Rebel’s clear anti-Muslim bias and would grant interviews despite stories that included conspiracies as wild and offensive as suggesting that the government covered up the Quebec mosque attack that killed six people.

That changed only when Goldy, who was a contributor to the online outlet at the time, appeared as a guest on the neo-Nazi website Daily Stormer after the alt-right rally in Charlottesville last year. Only then did everyone distance themselves from the site.

Similarly, it’s time that media and civic institutions stop granting legitimacy to the Sun while its columnists continue to demonize the “other.”

Bernie M. Farber and Richard Warman are with the Canadian Anti-Hate Network (antihate.ca).