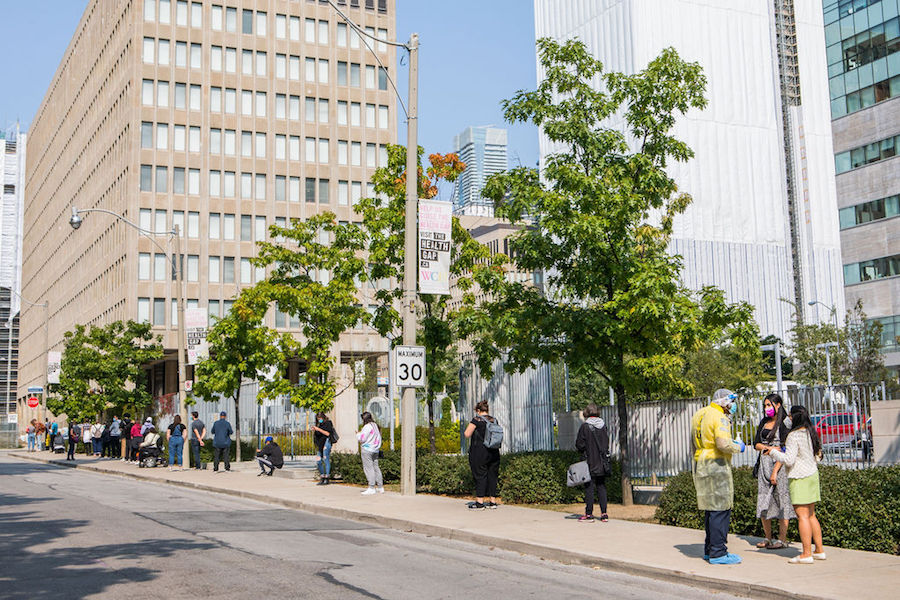 Ontario is no longer recommending people keep social circles and is discontinuing walk-in testing as part of a host of new measures in response to dramatic rises in daily COVID-19 cases.

At the same time, Toronto’s top doctor is urging the province to go even further and prohibit indoor dining and direct people to only leave their homes for essential reasons.

On Friday morning, the province reported a daily increase of 732 COVID-19 cases on October 2, a new record. Of those cases, 323 were in Toronto.

In her letter, de Villa said “the city is at risk of experiencing exponential growth of COVID-19 infections in the immediate future.”

“Without quick action from the province to implement further public health measures, there is a serious risk that the city will not be able to prevent the health and economic impact resulting from this surge, particularly with the imminent change in season,” she added. “Based on the experiences of other jurisdictions, smaller scale policy changes will not be enough to stop virus transmission, and large-scale action is needed.”

De Villa said the province should ban indoor dining for four weeks to prevent further spread of the virus.

The city has explored alternatives to closing restaurants and bars, such as allowing people to dine with members of the same household or targeting restrictions to specific area. But de Villa said she “does not believe that such measures will be either enforceable or effective.”

She also wants the province to direct people to “only leave their homes for essential trips,” such as “work, education, exercise and fitness, healthcare appointments and the purchase of food.” De Villa said this recommendation is based on the the success of the lockdown measures implemented during the first wave in the spring.

“Up to two individuals from outside a household would be permitted to provide social support if an individual lives alone,” the city said in a statement.

Other recommendations are to discontinue group classes in gyms and indoor sports team activities for four weeks, and to require large venues to submit a plan to Toronto Public Health outlining how they will comply with health and safety protocols, such as seating and collecting contact info.

“Dr. de Villa has concerns about exposures and outbreaks in large venues, some of which have a capacity of more than 100,” the city said in a statement. “She also expressed concerns about the current regulations that allow for 30 per cent capacity in these venues.”

“What I don’t want, is a return to a lockdown like we saw last spring. I do not believe that is necessary,” she said during a press briefing at city hall on Friday afternoon. “My proposals are meant to prevent the conditions that would force a large-scale lockdown.”

Alon Vaisman, an infectious disease specialist at the University Health Network, says De Villa’s proposed restrictions are the most sensible approach to avoiding the worst-case scenario.

At Premier Doug Ford’s daily press briefing at Queen’s Park, Health Minister Christine Elliott said she had received de Villa’s letter, which is “echoing the concerns we have been hearing from many other public health units across the province.

“We are working closely with the city, as we are with all of our partners in public health, to address these concerns,” she added.

Ford said that effective at 12:01 am on Saturday, the province is expanding the masking policies to everywhere in Ontario.

“That means wearing a mask when shopping, when taking public transit and when at work if you can’t keep two metres between you and your colleagues,” he said.

Ford also said Ontario is changing public health guidance from social circles to limiting contact with anyone outside their households.

“This will be especially important to consider as we look ahead to Thanksgiving next weekend,” he added.

The province is also pausing the reopening of any additional businesses for 28 days and is limiting capacity to restaurants, bars and nightclubs in Ottawa. And Peel must limit capacity to 100 customers or less.

On Wednesday, Toronto Public Health limited capacity to 75 with no more than six people per table.

Ontario is also limiting group classes in gyms and fitness centres to 10 people, and the facility capacity is now 50 people or less. Banquet halls and event spaces must now limit seating to six people per table and overall capacity to 50 people or less.

“The weather is driving more people indoors, which has led to more community spread and a surge in testing,” Ford said.

“We need to take these very necessary steps to protect our economy, to protect our schools and to keep everything open so that people can continue to earn a living,” Elliott added. “These measures are necessary to protect the health and well-being of Ontarians and of course to prevent future lockdowns.”

Vaisman believes bigger changes are going to be necessary to slow the recent surge in infections.

“It’s questionable whether such superficial changes are going to make any difference,” he says. “I think what they’re trying to do at the provincial level is just kind of biding their time making small changes. That really needs to be something a little bit more aggressive now.”

To avoid long lineups at testing centres in winter months, Ford said the province is moving to appointment-based testing on October 6.

As of October 4, Ontario COVID-19 testing centres will not accept walk-ins. People who already booked will be able to proceed with appointments.

The government said the change in policy will allow Ontario’s labs to “make significant progress in processing tests” and give centres more time to clean and reset.

Mobile testing and pop-up testing will continue and the number of pharmacies doing rapid testing will be expanded.

The new testing policy comes as long lineups form at testing centres and labs try to clear a backlog of more than 90,000 tests.

Vaisman says the previous policy encouraging asymptomatic people to get tested is to blame for the massive backlogs. “It’s completely unnecessary and wasn’t a good policy to begin with, and now we’re seeing the severe consequences of that,” he says.

Asked about what people should do on Thanksgiving, Elliott said the government is asking people to keep gatherings as small as possible or to immediate family.

“There are a number of people who do live alone who are experiencing isolation. We want them to be able to have connection to another group for mental health and social purposes. So we’re just asking people to be reasonable. Please try to keep your gathering small, to immediate households as much as possible.”

“Everybody has to think carefully about where they’re going and what they’re doing and assess the potential risk; assess the potential chance for transmission. What we’re hearing is that contacts, when a positive case occurs, are having upwards of 25 contacts that they’ve exposed themselves to,” said Dirk Huyer, coordinator of the province’s outbreak response. “That’s way more than very careful and considered intersection with others.”

Williams said people stopped following the social circle advice at the end of August and into September, but the challenge is that the meaning of “household” varies greatly.

That’s why the province has not given a “tight definition of household,” he said. “We want to say smaller. You have to refocus back down… pick your ones carefully.”

The advice now is people can choose the size of their circle but to keep it small, he said.

According to city of Toronto data, there are 169 active outbreaks in the community, as well as in congregate settings such as schools, childcare, workplaces and long-term care homes.

Outbreaks in long-term care homes have increased from two to nine in the past three weeks, the city said.

Toronto Public Health has reported “accelerated growth” in schools since reopening on September 15. There are 103 schools with active cases, including 68 between September 23-30.

“To allow for safe reopening, such as opening schools, it is recommended that communities keep new case counts to no more than one case per 100,000 population/day,” de Villa wrote in her letter.

In Toronto, 44 per cent of the 45 community outbreaks between September 20-26 were in restaurants, bars and entertainment venues, the city reports.

“Socializing in bars and restaurants is contributing to significant exposures and outbreaks,” the city said in a statement. “Last weekend, Toronto Public Health notified the public of a possible exposure to 1,700 people at the Yonge Street Warehouse, and another 600 exposures at Regulars Bar. Both establishments have cooperated fully with the public health investigation.”

During a public health briefing on Thursday, provincial medical officials said factors contributing to recent outbreaks in bars in restaurants are staff working at more than one establishment, staff socializing after hours and public health measures not being effectively applied.