Surprise – the economic mess Barack Obama is inheriting comes from Clinton, not Bush 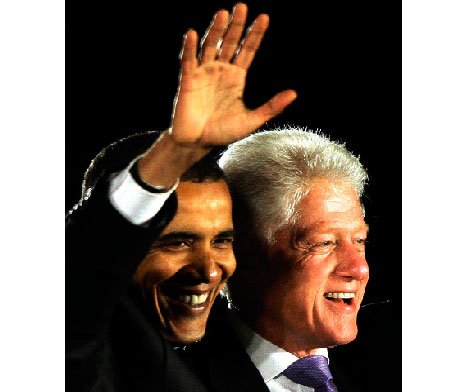 Let’s just say that comrade George Bush’s $700 billion no-speculator-left-behind bailout of U.S. financiers – perhaps the most significant wave of government takeovers since Castro’s in tiny Cuba – undermines the neo-con insistence that unregulated markets are the balm for all problems.

“I’m a market-oriented guy, but not when I’m faced with the prospect of a global meltdown,” Bush told admirers at the loony-right Manhattan Institute last week on the eve of his efforts to forge a coalition of the willing among the G-20.

Some actually thought a variant of the $700 bil could be found to help people pay their mortgages or put food on the table. To be honest, that idea even occurred to me.

Don’t bank on it. History shows that “the greater threat to economic prosperity is not too little government involvement…, but too much,” Bush told Manhattanites.

He concluded his plea to leave financial markets largely unregulated with a message about leaving world trade unregulated (actually, “free” is the synonym he used for deregulated). Meaning the outgoing president believes in unrestricted greed as a tool of public interest planning.

If truth be known, Bush inherited, as Obama will soon, deregulated financial, agricultural, trade and social policies. Put in place by Bill Clinton and Al Gore, these were the achievement of the 1990s – a period that needs to be understood not, as greens once hoped, as the “turnaround decade,” but as the “regression decade.”

Founded in 1995 under U.S. leadership, the WTO overturned the more sensible trade rules developed after World War II. These left food and agricultural policy out of free trade deals on principle, and in particular left them out of the 1948 General Agreement on Tariffs and Trade.

Clinton’s government was the juggernaut behind this decoupling of national and human rights from food. “We blew it,” Clinton admitted, speaking to a UN group in New York celebrating World Food Day on October 16.

“Food is not a commodity like others,” Clinton said in the widely unreported speech. “It is crazy for us to think we can develop countries around the world without increasing their ability to feed themselves,” he said, lambasting trade rules that forbid governments in poor countries to subsidize agriculture.

Hallelujah! The protesters who marched against the WTO have been vindicated, as have those who campaign today for public policies supporting self-reliant food systems.

Another Clintonian icon, Alan Greenspan, also admitted to some errors of his ways. Greenspan, appointed chair of the U.S. Federal Reserve by Ronald Reagan in 1987, was regarded as the wizard of high finance until his retirement in 2006.

In 1999, Clinton and Greenspan engineered financial deregulation that blessed derivatives (secondary assets that derive value from wherever) and tore down the Berlin wall that previously kept institutions handling risky investments separate from those handling low-risk loans like mortgages.

In doing so, they thereby restored the financial casino that ran amok in the 1929 stock market crash and again in October 2008.

Greenspan confessed to congressional investigators in mid-October that he was “in a state of shocked disbelief.” The “whole intellectual edifice” behind the paradigm leading to unregulated derivative markets “collapsed in the summer of last year,” he said.

That was a mild confession compared to the thoughts he blurted out during a mini-crisis in 2002. “There’s been too much gaming of the system. Capitalism is not working!” the wizard screamed at colleagues, according to Ron Suskind, author of The Price Of Loyalty: George W. Bush, The White House, And The Education Of Paul O’Neill.