NOW MagazineNewsTrouble in the Grove

Trouble in the Grove

Future of community-based park experiment hangs in the balance 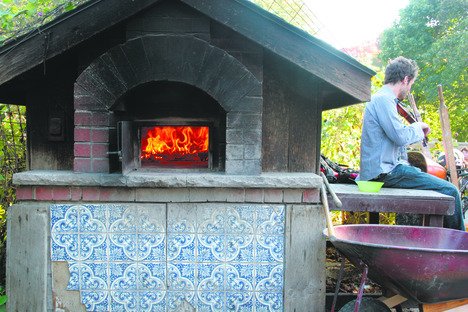 The big question at Dufferin Grove: are parks staff accountable to the city or to the community?

On a brilliantly sunny saturday afternoon, on my way into the Dufferin Grove clubhouse, I stop to watch some little kids pushing chairs around the park’s ice rink as they learn to skate.[rssbreak]

I’m overwhelmed by an odd feeling. This place reminds me of a time before every public encounter had to be run through a risk assessment and given a lawyer’s approval before it could begin, when mutual respect and trust were the currency that kept communal spaces thriving. That’s the promise of Dufferin Grove. And the challenge.

Right now, the future of the park – and the entire dazzling experiment with community-?initiated programming – is hanging in the balance.

It’s why I’m now standing in the park’s cinder-block clubhouse, sweating beside the wood stove and playing my version of a Tom Waits tune as part of an informal (many things done here have at least the appearance of informality) information session.

Next week, in a further episode of the city vs. Friends of Dufferin Grove Park showdown, the Friends’ Jutta Mason begins public meetings with parks staff, the community and city management – if they’ll come – to end the skirmishing once and for all.

She refers to this as an effort to “untangle the relationship.”

The trigger for the recent hostilities has certainly been Parks, Forestry and Recreation’s decision to move respected Ward 18 recreation supervisor Tino De Castro to another position. But the ongoing problem, once you get beyond the generality that this is a fight for control, is that part-?time city staff at the park are in an impossible position.

Both sides agree this is true. On the one hand the staffers are paid by the city on the other, they take direction and work with the community. The issue is, who are they actually accountable to?

“Recently, they’ve been receiving warnings from management that they are in a conflict of interest,” says Mason. “Now they’ve lost their supervisor, and many are telling me that that situation is making it really hard to remain on the job.”

There are eight senior part-time employees at the park, and in peak season upwards of 22, working anywhere between four and 40 hours a week.

The status of staff, who essentially run the park, morphs. Sometimes they’re there as part-?time city staff, sometimes they’re volunteers and at other times they may be employed by the Centre for Local Research into Public Space (CELOS), the non-?profit org Mason started to support the work at Dufferin Grove.

And it turns out there are no city rules around revenue-?making activities by citizens in parks where city staff officiate. This has become a major source of tension in a park where lots of cash transactions are involved in resident-?initiated projects like the small snack bar and skate-?lending service, the Zamboni Café, Friday night community suppers, even the swim diapers and kids’ snack food in the playground.

Both sides agree, at least, that the problem needs fixing. But their divergent methods of seeking a solution say a lot about the problem at hand.

At Parks, Forestry and Recreation, director of community recreation Malcolm Bromley tells me he loves Dufferin Grove, too, and that the park “won’t miss a beat with the staffing changes. We’re also doing some research on other cities that are ahead of us on public space management.”

The key thing, he says, is that “we need to clarify roles for staff. All partners need to know who does what.”

Bromley says his office is busy drawing up a partnership framework to give some policy underpinnings to resident-?city partnerships. It will be ready in a couple of months.

Will Mason and her group’s years of experience turning a once unfriendly, derelict park into an ultra-?participatory community centre without walls be brought in to help draft the policy?

“This is the first I’ve heard of it,” Mason says when I tell her of the city’s plan.

Ward 20 councillor Adam Vaughan sees the conflict as very unfortunate. “There are so many lessons we can learn from Dufferin Grove. Groups need a seat at the table to help adjudicate decisions. We need more neighbourhood-?driven solutions, not fewer, and that’s about political leadership and a willingness among managers and politicians to let go of some control.”

Meanwhile, Mason is hoping her upcoming consultations will move things along. “Park users, staff and the city will have to come up with a way to make this work so it gains management approval once and for all without losing everything that makes the park special,” she says.

If that can’t be worked out, then Dufferin Grove as the community knows it will be forced to change, she says.

I can hear the emotion in her usually even-?keeled voice when she tells me she’s tired.