NOW MagazineNewsCan Trump’s State of the Union save his presidency?

Can Trump’s State of the Union save his presidency?

As the impeachment trial of the president looms over his annual address to the nation, the Republican party is toeing the line – for now 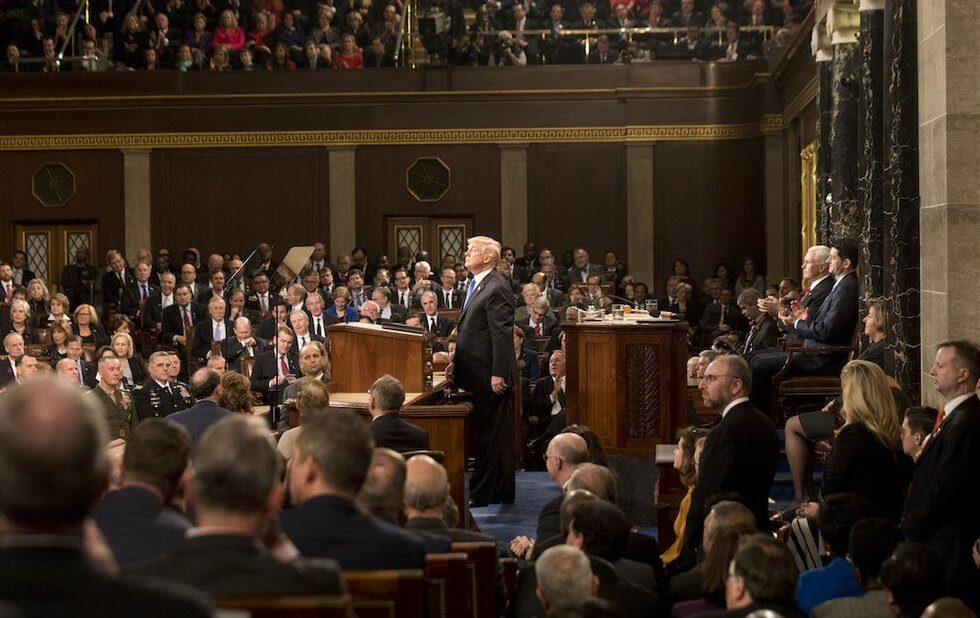 Donald Trump will deliver his third State of the Union today (February 4).

As the impeachment trial of the president unfolds, the question emerges whether the magical wand of House Speaker Nancy Pelosi, which seemed methodically slow in delivering the Articles of Impeachment to the Republican Senate, has been wielded again in a bid to cast a shadow over this year’s event.

It was about this time last year that Republicans were in a tizzy after Pelosi disinvited Trump from delivering the State of the Union while parts of the government remained shut down. The US was in the throes of the longest government shutdown in its history. And Trump, who wanted $5.7 billion to build the wall he had promised Americans that Mexico would pay for, refused to sign the required appropriations bills to keep the government operating.

While Pelosi operated clearly within the parameters of her constitutional authority, one can not deny it was a crafty political maneuver designed to affect some forward motion into a stalled situation.

This year, Trump’s impeachment trial is the issue that looms large over the State of the Union. The final arguments were delivered in the Senate on Monday. Politically, it was fortuitous for the Republicans to clear that news cycle ahead of tonight’s address.

But rushing the hearings through and blocking witnesses from testifying may not end up being the wisest course of action for Republicans.

Whether it is politically detrimental for Trump to deliver the State of the Union while being tried in the Senate for impeachment is up for debate.

Bill Clinton pulled it off in January 1998, just days after his affair with Monica Lewinsky had been revealed. Some say the speech saved his presidency. Clinton did it again in 1999, in the middle of his impeachment trial. According to a White House spokesman at the time, Clinton had “no intention of being diverted from addressing the issues that are important to the country.”

Therein lies the problem for Republicans. One can be certain that President Trump has no intention of being diverted from addressing the issues that are important to Donald Trump – even as polls show his approval ratings among Americans at 44 per cent. And new evidence to bolster the case for his impeachment surfaces daily. Even among Republicans, Trump is barely treading water. Only 54 per cent believe the president did nothing wrong on Ukraine.

The proof that Trump was personally behind efforts to coerce the new Ukrainian government of Volodymyr Zelenskyy to announce a phony investigation into Democratic presidential candidate Joe Biden is even stronger now.

Lev Parnas, an “associate” of Trump’s personal lawyer, Rudy Giuliani, has recently revealed he has a recording of Trump calling for the firing of former US Ambassador to Ukraine, Marie L. Yovanovitch, the Obama appointee (and anti-corruption expert) who was believed to be standing in Trump’s way.

Former Trump national security adviser John Bolton is now saying that Trump tied the delivery of Congressionally-approved military aid to Ukraine to an investigation into Biden.

The president of the United States cannot interfere with funding approved by Congress for any reason. That this was funding for an ally’s military and operational security in an extremely significant region pushes Trump’s actions into the realm of creating a national security risk.

Critics of impeachment in the Republican party are toeing the line for now. The question is for how much longer. This kind of political stench cannot be aerosol-sprayed away.