In the wake of bad press, a new customer service czar appears – as does Adam Giambrone 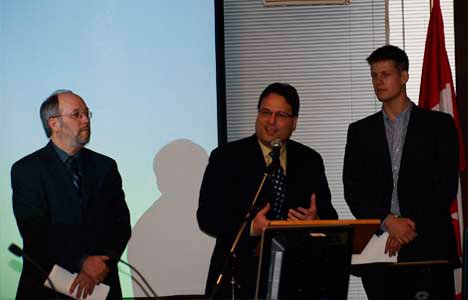 But minutes after the announcement was made there was already flak from the union representing TTC employees.

“I’m floored,” said Bob Kinnear, head of the Amalgamated Transit Union, Local 113, about the appointment of a GO Transit user from Milton who uses the TTC only for short hauls. “The traveling public quite frankly deserves better.”

Kinnear doesn’t think O’Brien, a 30-year veteran of the hotel industry, has what it takes to lead the advisory panel on TTC customer service.

“I’d like to ask him the last time one of his clerks was punched in the face,” he said.

Though the TTC said it will include front line workers, the general public, as well as the union in the advisory panel’s assessment process, Kinnear says he has yet to hear a peep from the transit commission.

Facing a media hoard on his first day back at work following an emergency vacation in Paris, Giambrone referred to the extensive resume O’Brien developed in his years with Hilton International, Delta Hotels & Resorts, Marriott Hotels & Resorts and, most recently, at One King West Hotel & Residence.

“I’m very excited about what this panel will do,” he said.

For his part, O’Brien jokes he may have stepped into the most difficult job in the city. “I’m extremely honoured, flattered — crazy,” he said, in his opening remarks.

“It’s not so much about when things go right,” he said. “It’s about when ‘the incident’ happens.”

O’Brien said the panel will come up with recommendations for the TTC on how transit can become an amazing “Guest Experience” for riders.

Councillor Joe Mihevc, vice-chair of the TTC, admits the TTC has to learn how to improve customer service.

“This has been a difficult month — couple of months — at the TTC,” he said. “We need to up the ante.”

He says the commission needs to start thinking about transit as more than a way to get riders from Point A to Point B. He believes O’Brien is just the man to head up the temporary transit think tank, which will develop a customer Bill of Rights.

“I hadn’t heard of him before,” he said. “All I know is he works at One King West, and he seems to be relatively good at public speaking.”

He likes talk of improving the experience of the ride on The Better Way though, and hopes Toronto’s next mayor takes the panel’s recommendations seriously.

The idea of a customer Bill of Rights has been around since 2000, he notes.

A report to the TTC is due at the end of June.

“Ideally the TTC should be a great way to see Toronto,” he said. “I’d really like to have a seat.”

O’Brien knows there are more than a few problems he’ll have to tackle.

“There’s a lot of things out there,” he said. “But give me some time.”[rssbreak]