TTC investigating video of a person “surfing” on a subway train

"This kind of stunt is not only incredibly dangerous and irresponsible, it is illegal," spokesperson Stuart Green said 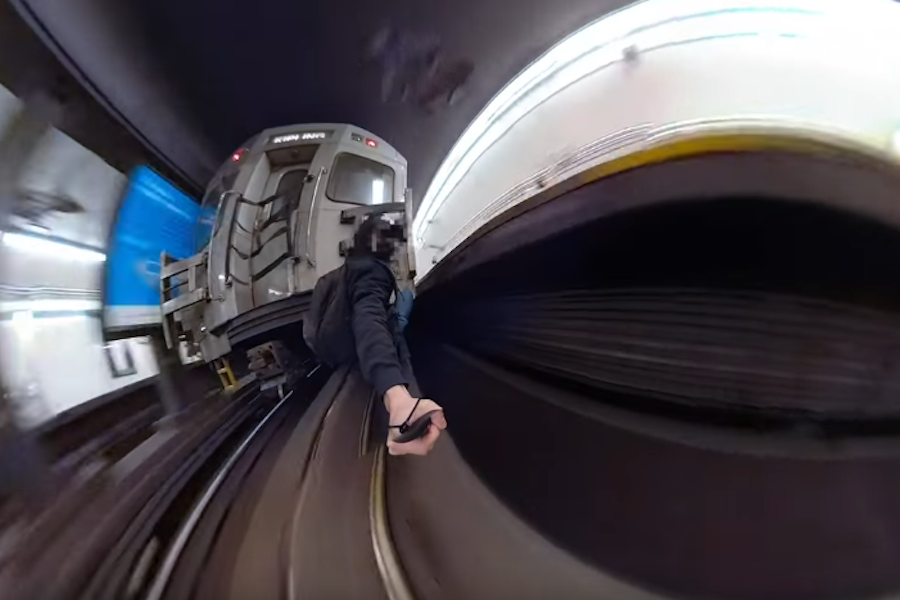 The TTC is reminding Torontonians that dangling off the back of moving subways is illegal after someone uploaded a “train surfing” video to YouTube.

“Friendly reminder from the TTC,” the public transit agency’s spokesperson Stuart Green tweeted on Monday. “Riding the back of a subway train and filming it for likes is dangerous and irresponsible. It’s also illegal… which is how it will be treated.”

The comment is a response to social media user ChaseTO, who regularly posts daredevil-type videos of people infiltrating off-limit areas, such as construction cranes and rooftops.

Shot with a fish-eye lens, the three-minute video shows a person with a pixelated face and altered-sounding voice climbing on to the back of a subway train at Bathurst Station and riding it eastbound to Spadina Station. The person is holding a selfie stick in an outstretched hand.

When the train stops at Spadina, the conductor spots the thrill-seeking rider, who proceeds to run away.

“I surfed the back of a subway car in Toronto on line 2 of the TTC,” ChaseTO wrote on YouTube. “The conductor was less than thrilled when he saw me jump off at the next station.”

The video upload date is August 22.

Friendly reminder from the #TTC:
Riding the back of a subway train and filming it for likes is dangerous and irresponsible.
It’s also illegal…which is how it will be treated.
Happy Monday.

Green said in a statement that the TTC is investigating the incident, which he believes took place before August 20.

“We are aware and [the video] has been turned over to our Transit Special Constables to investigate,” Green wrote in an email. “As best we can tell at this point, it was filmed before August 20 as this particular train has not been in service since that date (unrelated to this).

“It probably goes without saying that this kind of stunt is not only incredibly dangerous and irresponsible,” he added, “it is illegal and will be treated as such.”