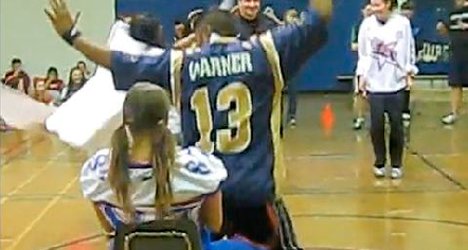 It’s bad enough that two teachers were suspended with pay from Winnipeg’s Churchill High School for performing a lap-dance in front of students. But even worse that their faux-striptease was captured on YouTube, the video went viral, and then a second video also emerged on Brightcove. Two teachers, one chair.

Winnipeg School Division trustee Mike Babinsky had mixed reactions to the leaked clips. “You can’t just look the other way in situations like this. By the same token, if you were to turn on the TV, within the next hour you’d find something similar to that on a music station.”

True, you definitely can’t look the other way with this. And all this happening in frigid Winnipeg, no less. You’d expect this dalliance with lap-dancing in an over-sexualized city like Montreal or Toronto, but the ‘Peg?

I think this video should be great for Winnipeg tourism. Especially during the winter months, Winnipeg needs all the attention it can get. Sure, it’s not the most family-friendly attention, but at least the city will be known for more than just bone-chilling winters and CFL fandom. Now, Winnipeg has two mascots – or martyrs – representing its sexy underbelly.

Even more interesting is how teachers are now being watched by students. Every action is being chronicled and uploaded, as if the students have become the watchmen in a quirky role reversal. These Winnipeg teaches are only the latest victims of a hyper-monitored world where every move you make can be documented for future embarrassment. Just ask the sleeping TTC fare collector.[rssbreak]