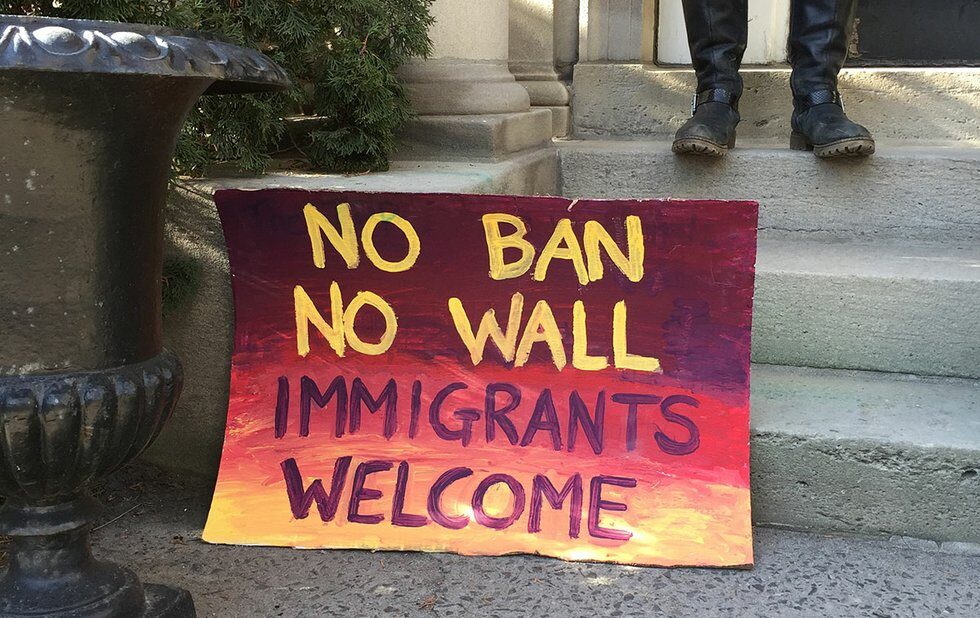 When Shannon McDeez posted a Facebook event in August inviting friends to stand up against a “Toronto Nationalist Rally” reportedly planned for the University of Toronto in the wake of the chaos of Charlottesville, it went viral.

Soon, media outlets were interviewing the U of T journalism fellow who became the accidental organizer of what’s shaping up to be the largest political rally against white supremacy witnessed in recent memory in Toronto. The Unity Rally To End White Supremacy is planned for noon this Sunday, October 15 at Queen’s Park. The Facebook event page lists 6,400 people as going and another 12,000 interested in attending.

McDeez says she doesn’t want to be “misconstrued as just some figure swooping in” in the larger tradition of “white people who have taken up enough space” in racial justice movements better served by the voices of people directly affected by racism: Black, Indigenous and people of colour.

Yet, the role of white allyship in anti-racism movements has always been complicated, from the ways white privilege inhibits progress to the strategic ways it can be used to turn white supremacy on its head.

Tens of thousands of white people joined the hundreds of thousands of African Americans at 1963’s March on Washington, site of Martin Luther King Jr’s I Have a Dream speech. It was a strategic inclusion on the part of the predominantly Black organizers, a show of unity meant to persuade a disconnected white America that civil rights issues were also their issues.

Black Lives Matter – Toronto’s Syrus Marcus Ware speaks of a “creative activism” that, while centred in affected communities, “thinks through what it means to have an allied team of white people who can move in the world in a different way and perhaps get access to different things.”

For example, when Ware was organizing with Friends of Mumia Abu Jamal in support of Black activist and former death row inmate Mumia Abu-Jamal and the MOVE 9 stateside, the cross-border partnership required travel to the US. A white member of the team was designated as driver to avoid racial profiling at the border.

“We knew that white privilege would allow a certain kind of experience at a border crossing that was different perhaps than Brown or Black people in the group,” says Ware.

But coalition building within activist circles isn’t immune to the power dynamics at play in the world at large.

Memorial University assistant professor and white feminist ally Carol Lynne D’Arcangelis engages in research on “non-colonizing solidarity” between Indigenous and non-Indigenous women. She’s seen the ways in which social justice work between Black, Indigenous and people of colour and their allies enact a “kind of microcosm of colonial relations” that centres on the white experience.

D’Arcangelis interviewed 11 Indigenous women and 13 white women about the challenges and possibilities of creating solidarity work that doesn’t fall into a colonizing pattern.

She discovered that white women held a “desire for proximity” to Indigenous women, believing their nearness to this group both validated their activism and exonerated them from racism.

That desire manifested itself, D’Arcangelis says, in white women wanting to participate in direct action only when Indigenous women were present. They held fetishizing ideas, such as the belief that Indigenous culture would bestow upon them what they’ve been denied in white, paternalist culture, such as respect for older women.

They also believed their status fighting shoulder to shoulder with a marginalized group would recast them, says D’Arcangelis, as a “good white,” who had “transcended white supremacist and settler-colonial power structures,” an idea expounded on in University of Utah associate professor Audrey Thompson’s colourfully titled 2003 research paper Tiffany, Friend of People of Color: White Investments in Antiracism.

D’Arcangelis saw a pattern in the way white women allies believed their privilege wouldn’t follow them through the door when they entered activist spaces. But it always invariably does.

McDeez is aware of the privilege she holds as a white woman and how it positioned her as a spokesperson. She recounts how a journalist interviewed both her, as “someone who got lucky with a Facebook event page,” and an attorney, writer and community activist woman of colour with over 20 years in anti-oppression work. The journalist only quoted McDeez.

McDeez resists the idea of being a “voice” or “an authority figure” and says she reached out to more experienced activists, such as Walied Khogali and Jeewan Chanicka, co-founders of the Coalition Against White Supremacy & Islamophobia, to help organize the rally.

In a recent press release, her role was more modestly described as “organizer of the Facebook event page that sparked the action” with primacy given to the point of view of Khogali and Chanicka, both of whom are people of colour. The release also cited a list of demands that centers on racialized and marginalized groups, an evolution from the rally’s original intent which was to disrupt a white supremacist rally. McDeez says the demographic of respondents on the Facebook event page skewed predominantly white.

The group’s demands include a call on the Canadian government to condemn President Trump revoking of the Safe Third Country Agreement, which bars most refugee claimants from entering from the US over land to claim asylum in Canada and rescinding federal legislation that targets racialized Black and Brown Muslims and refugees, including “anti-terror legislation” Bill C-51.

Ware notes that Toronto, as one of the most diverse cities in Canada, offers a unique opportunity for coalition building among allies.

“There’s a very large Black population but there’s also a large population of radicalized white people who are interested in supporting the movement for Black lives,” says Ware.

But the ongoing challenge remains to figure out how to build “in a way that doesn’t fall into the familiar pattern of white supremacy.”

“All living beings on this planet are interconnected,” continues Ware. “So the kinds of violence we see enacted on Black men, on the disabled, on trans people, affects every single being on the planet and we need it to end today. That is what we should all be working on. Period. Because without that I’m not really sure what else it is that we’re doing here.”

An earlier version of this story incorrectly stated the rally’s original intent was for white allies to disrupt a white supremacist rally the rally wasn’t solely for white allies. We regret the error.