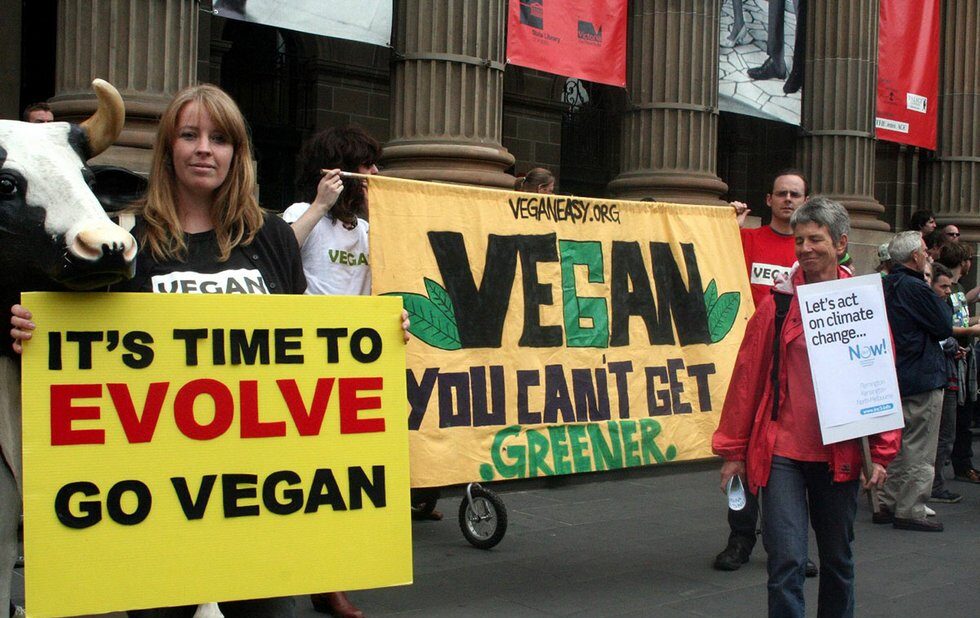 A growing global trend of compassion towards animals is making it easier to take a critical look at at our food, clothing and consumption choices.

The environment movement is on high alert these days with increasing panic around stopping our extinction from climate change. That means lifestyle-purification messaging and moralizing about eating animals are on the rise.

As a long-time activist and someone who lives with a digestive illness that requires meat-eating, I can find it exhausting to navigate conversations around veganism.

Citizens’ Climate Lobby member Caterina Lindman is quoted in the December 13 issue of NOW stating that meat-based agriculture is killing the planet. She says that her group “doesn’t lobby for vegan diets but a lot of us are vegans because we are climate activists and this is something we need to do.”

At a September 8, 2018, rally for climate action, I was surprised to see a massive veganism banner and a contingent of people equating climate change with meat-eating. I doubt the focus on a vegan lifestyle message as a way to combat climate change will help expand the movement – one that a number of activists will ensure stays small and morally pure with their silencing of those who eat meat – to a wider range of people. I fear the opposite – that it could ensure the movement remains a space dominated by those who are white and enjoy class privilege.

The political stance around veganism and the climate seems built on the notion that we all have choices about what we eat. This thinking leaves out the reality that many Indigenous peoples are genetically predisposed to thrive on meat and not consume many carbohydrates. These traditional diets predate white settler incursions in North America.

There is ample evidence that some Indigenous peoples do very poorly on a high-carbohydrate diet, with insulin resistance on the rise leading to epidemics of diabetes and more. Research at the Diabetes Centre at Mount Sinai Hospital from 2010 points out that “Aboriginal people in the past lived mostly hunter-gatherer lifestyles. They moved with the seasons and stayed very active while searching for food. Consequently, they developed a certain genotype that allowed them to effectively store energy during feasts, which helped them survive during times when food was scarce. Their current nutritional circumstances have changed dramatically. Many Aboriginal people live on reserves. They do less hunting and fishing. There’s a high rate of unemployment and the foods that they’re exposed to are high in calories, fat and carbohydrates. As a result, there’s a high rate of obesity and the obesity leads to high rates of Type 2 diabetes.”

High-carbohydrate diets – and veganism is by definition in this category – are also linked to cancer and heart disease. It is unclear where non-vegan diets from other cultures that traditionally prioritize meat-eating fit into the environment movement.

Parallel to the vegan diet rise is the rise of the ketogenic diet. Ketogenics is centred around low-carbohydrate, high fat and animal product consumption. This diet is helping people like me, but we get little air time in the rush to purify us of our meat-eating. As I age, my body can’t tolerate many carbohydrates. A lower-carbohydrate, high meat and fat diet helps me thrive.

But attending environmental activist meetings and engaging with some Facebook friends to discuss the possible merits of meat-eating can be perilous. Being denounced on social media for sharing my view on meat can lead to unwanted stress in the form of exhortations to not kill animals and to save the planet by giving up meat.

All environmentalists must acknowledge that factory farming needs to end, and animal cruelty must be addressed. Further, environmentally destructive agricultural practices around meat production must change.

But the climate justice movement has more potential for real momentum-building and to appeal to a more racially diverse constituency if we acknowledge the meat-eating practices, diverse diets and other lifestyle variations of people from all cultures.

Eating meat can be part of our future on this planet. Meat-eaters should be more readily welcomed into the climate movement, not forced to hide our meat at lunchtime while vegan and vegetarian diets are prioritized.