Once representing the social promise of high-rise living, legacy towers in the GTA are now more emblematic of chronic social and economic divestment 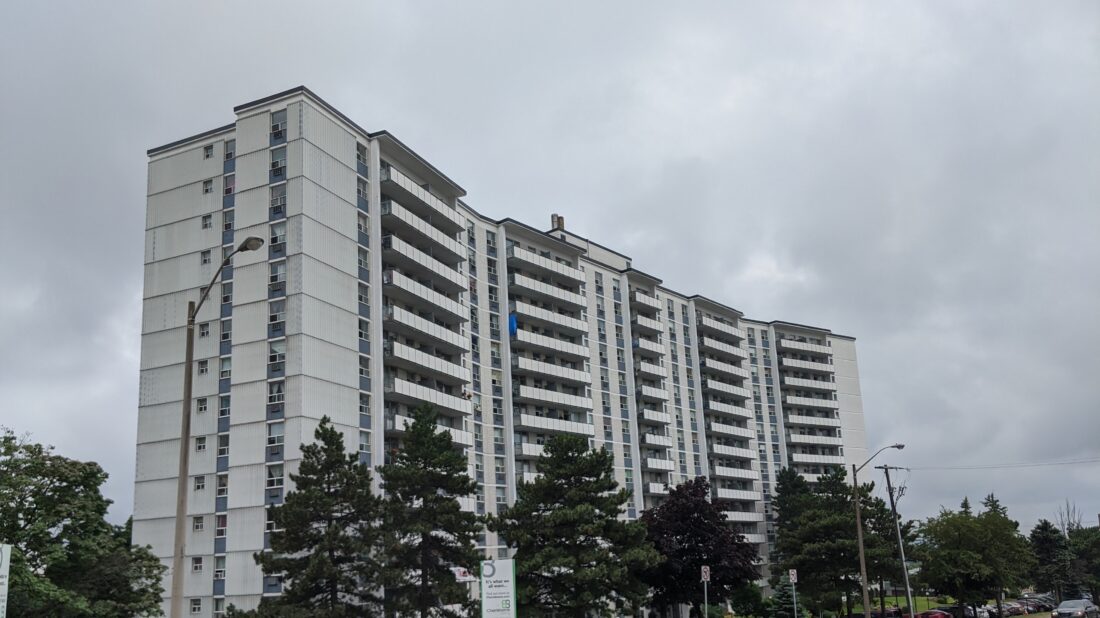 Legacy high-rise apartment buildings constructed between 1960 and 1985 during Canada’s federally incentivized “apartment boom” are an enduring symbol of modernist development.

Once representing the social promise of high-rise living for upwardly mobile young singles and couples, and still an asset to our region, legacy towers have since fallen into disrepair and are now more emblematic of chronic social and economic disinvestment.

Unsuitability or overcrowding, another indicator of core housing need, is widespread in the region’s high-rise towers.

When families cannot afford units large enough to accommodate their households, they have little choice but to compromise space by renting a smaller unit or “doubling up” with other households to offset rental costs.

Overcrowding is connected to a range of negative health outcomes in children and adults, including psychological distress, general physical health and respiratory infections. Overcrowded spaces can increase the risk of transmission and outbreaks of communicable diseases, as witnessed during the COVID-19 pandemic, where infection rates in Toronto were four times higher among people living in neighbourhoods with high levels of overcrowding.

Despite their for-profit mandate, legacy towers provide lower than average market rents, making them a highly sought-after commodity for low to moderate-income renter households. The highest savings gaps are found in the city of Toronto, where high-rise tenants pay on average $149 or 14 per cent less for their monthly rent than other renters in the primary rental market.

Notwithstanding these lower rents, tenants struggle to make ends meet as the gap between rental costs and incomes widens.

Across the Toronto CMA (census metropolitan area), high-rise renters’ average household incomes lag far behind the incomes of other renters and homeowners.

Between 1980 and 2015, the real average wage of high-rise renters increased by a mere 5.1 per cent compared to 40.6 per cent growth for homeowners over the same period. Almost half of all high-rise non-condo renter households in the Toronto CMA are low-income households, with before-tax earnings of $39,183 or less.

In Toronto, Peel and York, 49 per cent, 45 per cent and 57 per cent respectively of high-rise non-condo renters live on a low income.

Housing is considered unaffordable when it is equal or above the 30 per cent threshold of a household’s before-tax income. Between 1981 and 2016 across the region, the number of high-rise tenants paying more than 30 per cent of their income on rent increased to 48.9 per cent in 2016. Those operating at or above the 50 per cent benchmark experience deep unaffordability—forcing difficult budget trade-offs by leaving little room for other important expenses such as groceries, medical costs and transportation.

While legacy towers provide relatively affordable options when compared against average market rents, for many renters, even these relatively lower rents remain unaffordable.

Beginning in the 1990s and escalating since Real Estate Investment Trusts (REITs) and other investment companies such as pension funds and private equity firms have invested heavily in the region’s private tower stock.

These practices are enabled by vacancy decontrol policy allowing property owners to increase rent by any amount once an existing unit becomes vacant.

Housing inequities are symptomatic of racism and discrimination

While much of the dialogue around affordable housing is focused on the development of new, deeply subsidized, below-market and private market purpose-built rental units, the maintenance and protection of existing affordable stock is an equally important prong of a more comprehensive strategy.

Addressing affordability and deteriorating conditions of legacy towers is not only a financial and market imperative but an equity imperative.

The private sector alone cannot respond to the dual challenge of affordability and repair of legacy towers. This is a public sector challenge that requires government, private sector, the philanthropic sector and community service organizations.

Excerpted from the United Way of Greater Toronto’s report, Vertical legacy: The case for revitalizing the GTA’s aging rental tower communities, in cooperation with Neighbourhood Change Research Partnership and Tower Renewal Partnership. This excerpt has been slightly edited for length. You can read the full report here.

One response to “Vertical legacy: The case for revitalizing the GTA’s aging rental tower communities”