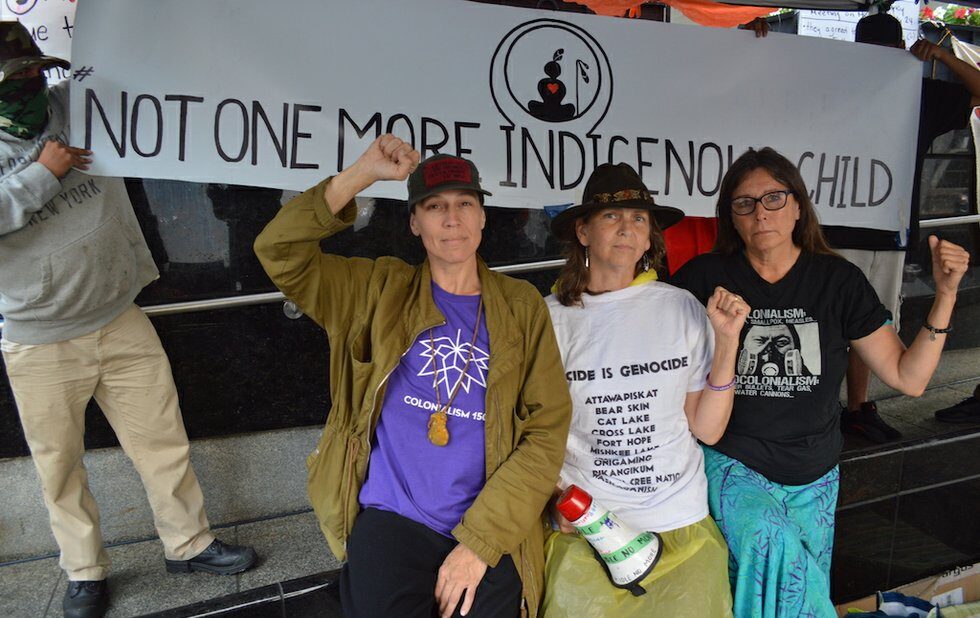 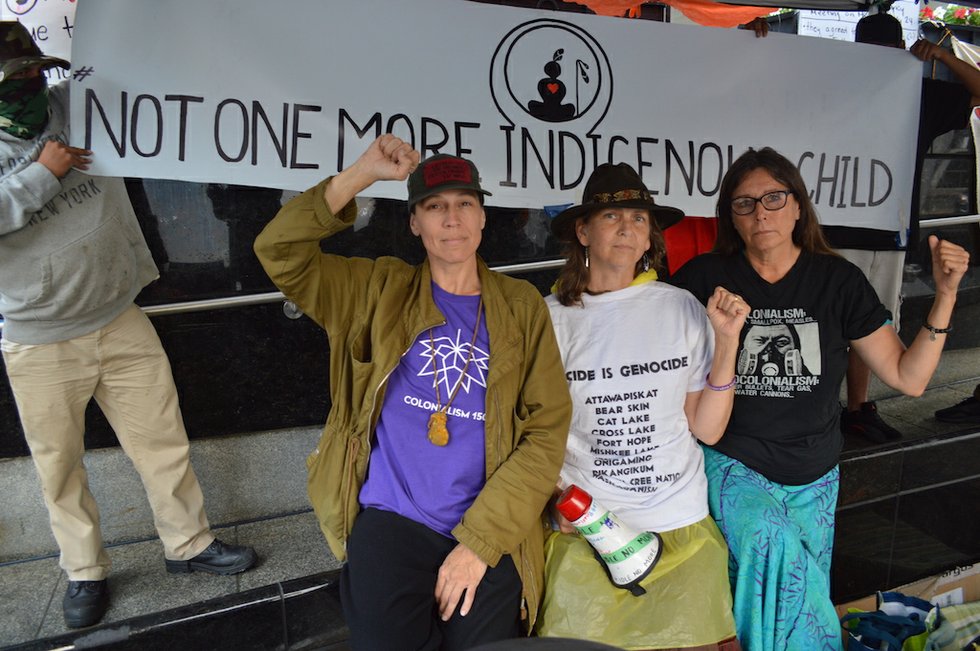 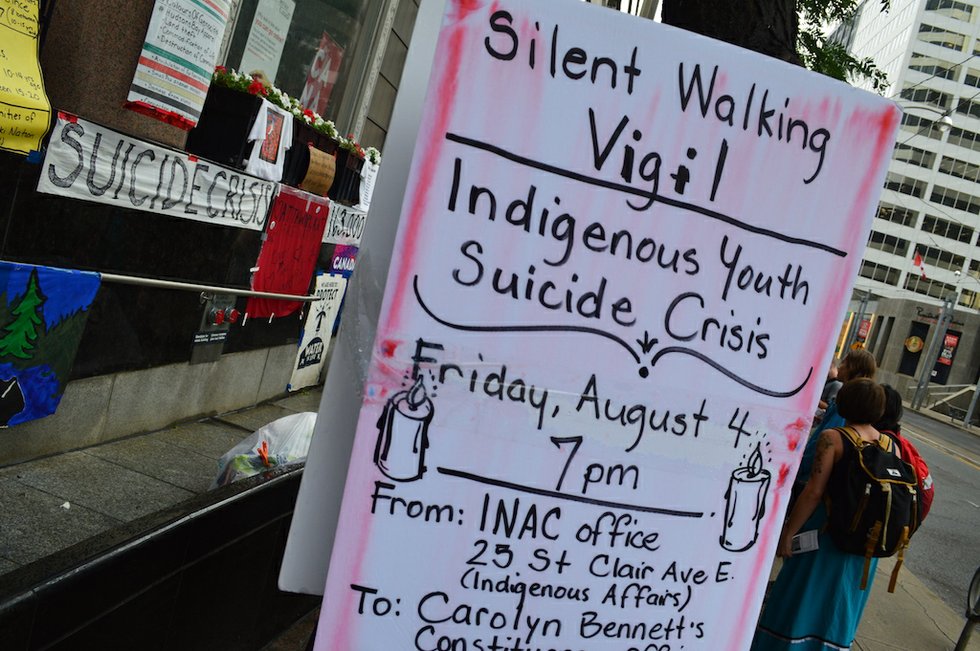 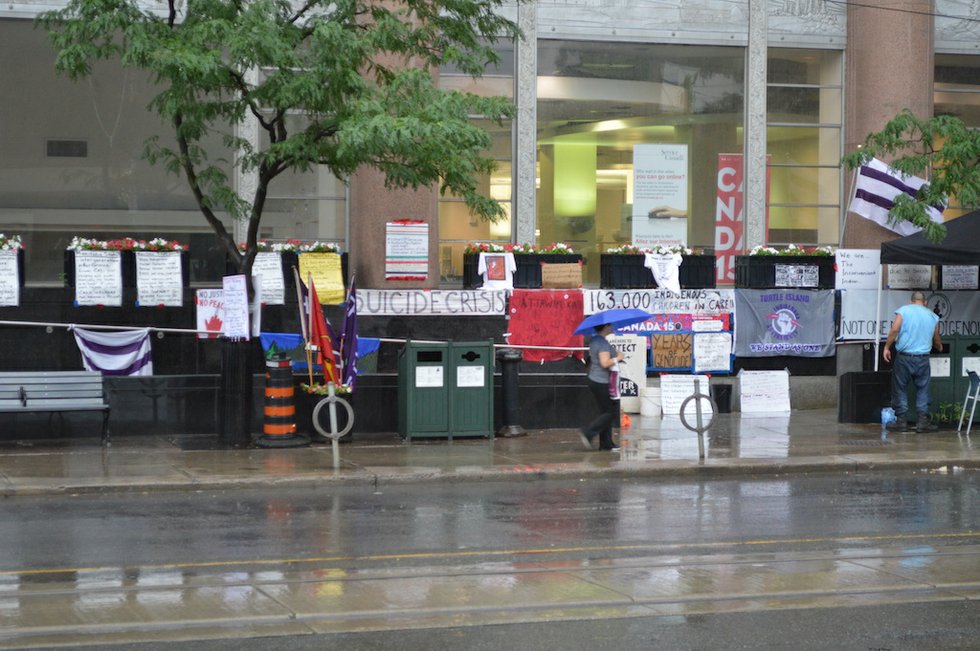 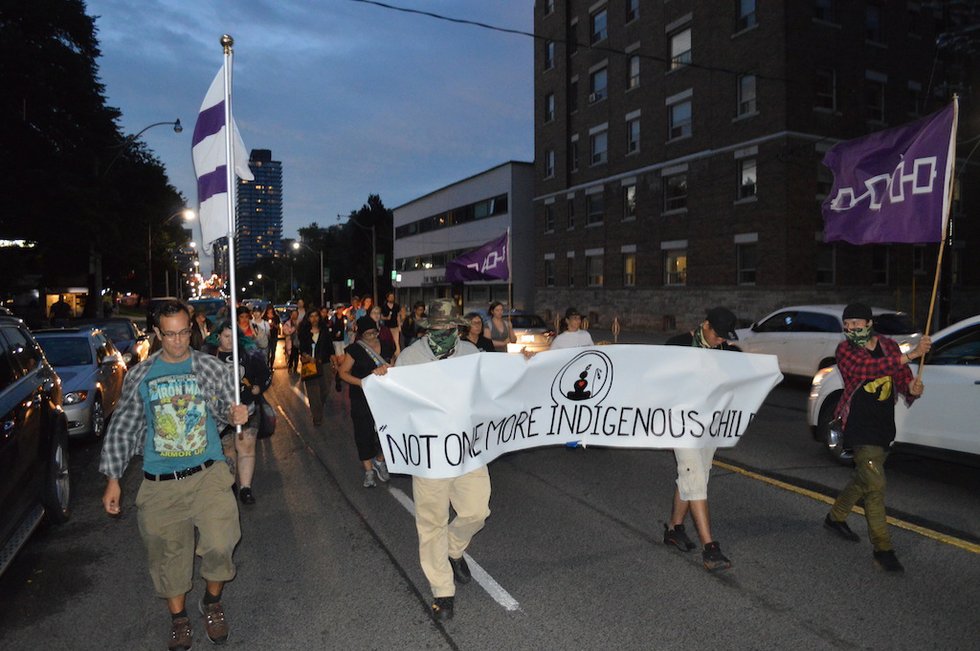 Carrie Lester is trying to stop a leak between the two gazebo tents which she and fellow activists Sigrid Kneve and Sue Lynn Manone Cornfoot have been occupying just steps from the offices of Indigenous and Northern Affairs Canada (INAC) at 25 St. Clair East.

The three women, who have been holding vigil on the site since July 20, are calling on federal and provincial governments to release allocated mental health monies and address Indigenous youth suicide issues after a rash of recent deaths.

Cornfoot is handing out pamphlets to passersby scurrying through the rain storm, which has forced the cancellation of a march planned on this night ( Friday, August 4). The depth of the crisis is spelled out in the brochure. The numbers are grim.

The Nishnawbe Aski Nation (NAN) represents 49 communities with a total population of 45,000 across Northern Ontario. There have been more than 500 suicides across in NAN First Nations since 1986. More than 70 were children aged 10 to 14 another 200 were youth aged 15 to 20.

A number of First Nations communities have declared a state of emergency in recent years. An emergency meeting promised by the office of Carolyn Bennett, Minister of Indigenous and Northern Affairs, to deal with youth suicides ended in a postponement and won’t take place until September.

Kneve says that while she is disheartened the minister’s office put off the meeting, there really is no need for one. The need now is for action. Activists occupied INAC offices for nine days last April during a suicide crisis in Attawapiskat.

“They’ve done the research, they’ve come to their conclusions, they just need to release the money,” Kneve says. On June 24, the Standing Committee on Indigenous and Northern Affairs tabled a report entitled, Breaking Point: The Suicide Crisis in Indigenous Communities.

A survey included in the report on the quality and availability of mental health services to Indigenous communities highlights that wait times to access these services resulted in some clients going without care.

The survey, which was sent to more than 50 administrators, front line social workers and health workers in hospitals, treatment centres and community health facilities from Nunavut to Newfoundland and Labrador and the provinces in between, also found that overall, a majority of respondents (61 per cent) assessed the quality of mental health services as poor or below average. More than half (51.5 per cent) cited not enough staff as the reason for inadequate services. Almost as many (43.6 per cent) cited inadequate training.

The minister wrapped into the same announcement an allocation of $200,000 for four additional mental health counsellors for Wapekeka First Nation, the remote Ojibway community (population 355) 450 kilometres north of Sioux Lookout where currently four girls are in crisis and 26 more considered high risk.

Lester says the funding was promised last year when the community was going through a spike in suicides but the money was never delivered. “That’s criminal,” says Lester.

Resource exploitation and access to land for hunting and fishing is a big issue around community well-being. Many First Nations communities are built on flood plain and says Lester, “there is always another resource underneath to extract,” forcing multiple relocations of some communities.

Lester says “There is a multifaceted number of things that need to be done all at once,” including access to drinkable water.

The rain has let up and the 30 or so who didn’t get the message on Facebook that the march was cancelled light their torches, assemble and head to Bennett’s riding office around the corner and three wet blocks north up Yonge.

Lester, Kneve and Cornfoot say they don’t know how long they will continue their vigil. They are asking supporters to flood the inboxes of government decision makers after three more suicides were reported last week.

The call for action on the back of their brochure reads: “We demand that the Canadian and Provincial governing bodies take immediate action to redress these impacts of colonization and genocide.”