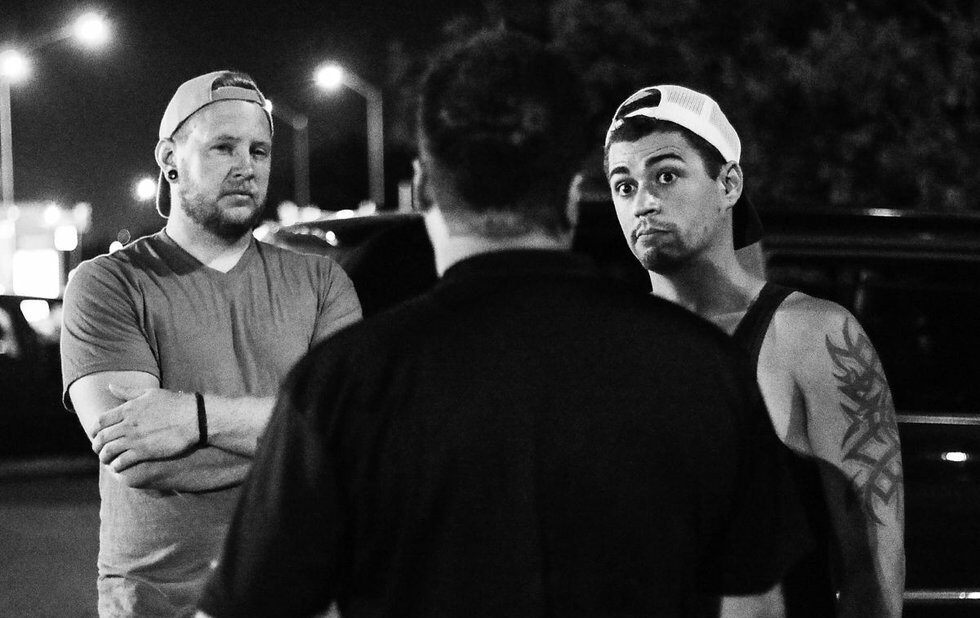 Justin Payne (right) with a bodyguard during a 2016 encounter with John in a Brampton parking lot.

A 29-year-old GTA man who gained attention as a vigilante pedophile hunter is denying accusations of identity theft and the use of photos of minors without their permission. Justin Payne, a construction worker by day in Burlington, spends his evenings luring child predators by posing as kids on dating apps. Eventually, he confronts these predators in person and holds them accountable for their actions, catching the whole thing on videotape.

He’s become a bit of a celebrity online. Under the name The Payneful Truth on YouTube, Payne’s videos have amassed over 60,000 subscribers and several million views. The comments below videos range from, “You’re a hero” and “Good job, man,” to accusations that he’s a fraud and shouldn’t be doing amateur police work.

But now, another kind of allegation has surfaced. On April 4, a Toronto teen told CTV she was shocked and frightened to discover that Payne has been using a photo of her to lure predators. She claims she never gave him permission.

However, Payne denies the allegations, telling Vice, “What is being said is lies and rumours. I’ve had consent for the pictures I use. Same pictures for the past few years.”

He told Vice that the teenage girl’s mom is his ex-girlfriend.

Tianna Gerrior, a woman in Oakville who who says she dated Payne from 2015 to 2016, told NOW that she’s concerned he’s been using photos of her children, too. Gerrior has a teenage daughter and five-year-old son.

“There have been five pictures confirmed of children that he knows,” she says. “Me and a few other women he’s dated are trying to identify the rest.”

Gerrior says she met Payne online and initially thought of him as a hero. But after some months passed, she realized he had cheated on her and ended the relationship. She began connecting to his other ex-girlfriends and discovered that Payne had maintained at least 17 relationships over 10 months.

“He would ask people for money. He would say he couldn’t pay his phone bill and a woman would send him $100, or his car broke down and someone would send him $200,” she explains. “It’s like catfishing. He literally plucked these women out of his fan base and manipulated them.”

She says if it wasn’t about cash or helping him pay bills, it was giving Payne a place to stay, an ego boost, or in some cases, access to children.

“My daughter was 13 and he recorded her voice to use in his chats, saying things like, ‘Hi I’m at Tim Hortons’ because he wasn’t able to mimic a young girl’s voice. He didn’t have my consent,” she alleges.

Payne says he doesn’t want to comment any further on the accusations, stating through Facebook that he’s hiring a lawyer given the situation.

According to Gerrior, who hasn’t had contact with Payne since January 2016, there are more women – and their children – waiting to come forward. She wants people who might be fans of his vigilante work to know he has another side to him.

“He’s hurting people in every form,” she says. “He’s a complete fraud.”