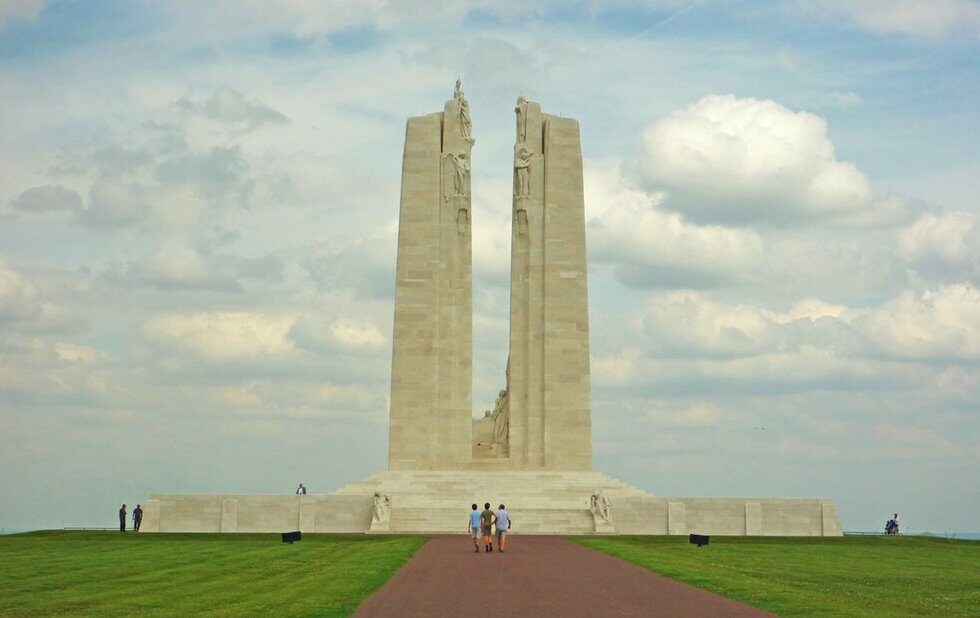 Unless you happened to be off the grid on the weekend of April 9, it was just about impossible to escape the media saturation accompanying a gathering of some 25,000 Canadians, including Prime Minister Justin Trudeau, near the tiny northern French farming village of Vimy, the site of a First World War battle Canadians fought a century ago.

While drone cameras provided stunning overhead shots of the Canadian National Vimy Memorial, CBC anchor Peter Mansbridge donned Google’s Trekker technology, which allowed those watching on TV to follow along as he explored trenches that remain from the famous battle.

Reviews of Canadian War Museum historian Tim Cook’s book Vimy: The Battle And The Legend, as well as countless op-eds and feature articles, were as thick in the media as the untouched shell holes that still dot the Vimy battlefield.

As the headline of a Special Collector’s Edition of a Canadian history magazine proclaimed in February, the battle was “the birth of a nation.”

Following Don Cherry’s requisite Saturday night centenary soliloquy on Hockey Night In Canada, Ron MacLean reiterated (and I paraphrase) that whether they were from Nova Scotia, Alberta or Ontario, the troops involved emerged (presto!) Canadians. (Cut to commercial.)

Vimy, of course, is the place where four Canadian divisions, fighting side by side for the first time, captured a tactically significant hill, something that neither the French nor the British had been able to do, at the cost of 3,598 dead and 7,000 wounded, in a battle that raged from April 9 to 12, 1917.

Pierre Berton’s book Vimy (1986) popularized the notion that it was hardy Westerners, children of the frontier, who formed the Canadian Corps’ backbone. Youthful, unified, gritty, innovative, where people weren’t born into status but earned it, Canada showed the decadent Europeans a thing or two, earning itself both a spot at the Versailles peace conference and eventual independence.

Forget the Plains of Abraham, forget the War of 1812, forget confederation, forget the Last Spike – Vimy is, in fact, our bloody founding myth, rivalling that of the storming of the Bastille or the Boston Tea Party.

A majority of those who went over the top that day – including my own grandfather, Private William Edward Gibson, a runner with 2nd Canadian battalion – were first-generation British immigrants, motivated at least partially out of a sense of duty to the mother country, as well as adventure and economic hardship.

Others hailed from Japan, Iceland, the United States, Denmark, Russia and Germany.

Canada may not yet have been the multicultural mosaic that we associate with the 21st-century GTA, but it was well on its way of becoming so.

Nor was there a national consensus. The simmering conscription issue divided the country, as it would during the Second World War.

Disregarded by the Anglo-Canadian male narrative, the stories of women and Native Canadians continue, belatedly, to emerge. Think Three Day Road by Joseph Boyden, whose maternal grandfather and uncle served as soldiers during the First World War.

Part of a larger, much less successful Anglo-French offensive that petered out in mid-May 1917, the Battle of Arras is infamous for being the bloodiest British offensive undertaken.

But let’s be fair. Even if Vimy is a footnote in the grander narrative of the Western Front, that didn’t prevent some Vimy veterans, including Farley Mowat’s father, Angus, from feeling a certain pride in what they had accomplished that snowy Easter Monday morning, something that emerges in Mowat’s memoir My Father’s Son (1990).

Conceived of in a climate influenced by sentiments of “never again” and League of Nations internationalism and Erich Maria Remarque’s novel All Quiet On The Western Front, the Toronto architect and sculptor Walter Allward’s Vimy memorial soars skyward, the outward trappings of militarism and triumphalism absent. It’s tenor is sorrowful, pensive, sombre.

The centrality of the dead, and in particular those who have no known graves (more than 11,000 names are inscribed on the memorial), does a disservice to those who, like my grandfather, survived – barely.

By the time of the memorial, years overdue and over budget, was unveiled in July 1936, witnessed by thousands of Canadian veterans, the political climate had changed.

As the authors of the recent The Vimy Trap: Or, How We Learned To Stop Worrying And Love The Great War, point out, the original antiwar message Allward imagined has now been usurped by the tropes of bravery, heroism and death-so-noble, the underpinnings, in other words, of our current national myth, a phenomenon they’ve dubbed Vimyism.

Recent writing on the centenary seems to revolve around personal impressions occasioned by visits to the memorial, so let me add my own. Reconciling my holiday adventures with the butchery associated with Vimy has always been a struggle – not quite disaster tourism, but pretty darn close.

It was while pursuing research in Arras in March 1996 that I first visited the memorial, and, shame on me, I remember very little of the experience, other than that a Frenchman who upon learning that I was hitchhiking to the memorial, presented me with a pouch of Gauloise tobacco, rolling papers and matches, “un cadeau de France.”

Highlights of my post-tobacco and post-hitchhiking 2002 sojourn include a tour of Vimy’s Grange Tunnel provided by one of those affable Canadian university students, and local dog walkers and joggers swarming the memorial on a French holiday.

A March 2005 visit was memorable for the remarkable vista toward post-industrial Lens, a walk through the carefully manicured (cement) trenches and duckboards, and a sudden snowstorm that prevented a leisurely meander through Commonwealth War Graves cemeteries. In a hastily snapped image taken from several hundred metres away, the memorial’s twin towers, representing France and Canada, seem unfathomable, unapproachable, apparition-like.

What strikes me more than the memorial’s shimmering white towers or the inscribed names or Allward’s achingly beautiful allegorical statuary are the accounts of the soldiers, the human face of battle.

A veteran of two years on the Western Front, Private Victor Wheeler, a signaller with the 50th (Calgary) battalion, goes over the top in a blinding snowstorm on April 12, the final day of the attack. A large-calibre shell crashes into his section, killing several outright. Tossed aside like a rag doll, Wheeler’s pal suffers a broken back and shattered limbs, with shrapnel riddling his skull. Since Wheeler can do nothing for the wounded man, he pushes on. But he can’t forget the heart-wrenching scene.

We are often asked never to forget and, as the centenary media frenzy abates, this is what I’ll never forget.

Craig Gibson’s first book, Behind The Front: British Soldiers And French Civilians, 1914-1918, was published by Cambridge University Press in 2014.