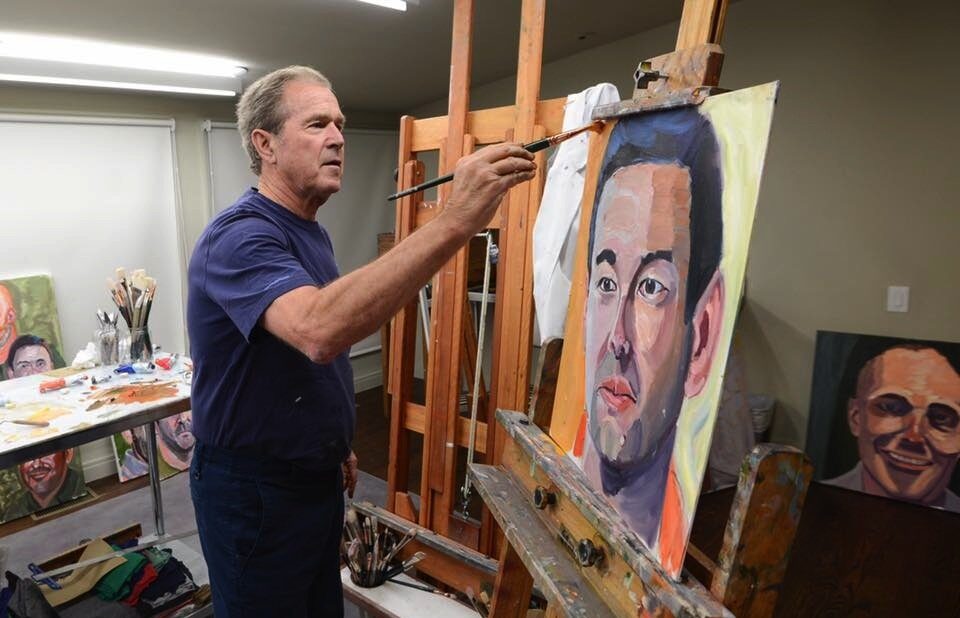 George W. Bush’s recent public relations tour designed to remake his image as a tortured artist wrestling with demons – a flawed but morally introspective tragic figure – has been remarkably effective.

Bush has been the lucky recipient of dozens of friendly write-ups, interviews and TV appearances, all with only the mildest of liberal chiding around the margins.

In all the fawning press coverage [of his Portraits Of Courage: A Commander In Chief’s Tribute To America’s Warriors], one thing has been notably absent: Bush’s Iraqi victims.

This winter’s PR tour has focused on Bush’s paintings of wounded American veterans as the primary negative consequences of the invasion of Iraq. In 10 of the most prominent articles praising Bush in the past few months in the New York Times, the Washington Post, the Guardian and on NPR among others, not a single one mentions his Iraqi victims.

Only one article makes vague reference to the Iraqis killed and injured (Washington Post’s Philip Kennicott opaquely mentions “the trauma here and in Iraq”), but none notes the number of deaths (estimates range from 500,000 to 1 million) that resulted from Bush’s war of aggression. None profiled an Iraqi who suffered or continues to suffer as a result. This is likely for the same reason Bush didn’t bother to find any to paint – they simply don’t factor into the U.S. moral calculus.

“W” And The Art Of Redemption, a glowing profile by Kane Farabaugh of the U.S. government-funded Voice of America (3/4/17), doesn’t even contain the word “Iraq.” Others like the New York Times’s Mimi Swartz, make glib jokes about it.

To the extent that the Iraq invasion is addressed in Schjeldahl’s review, it’s a punchline. The trauma of Iraqi victims is used to jazz up an otherwise mediocre piece of art criticism.

This type of runaway nationalism is so common we hardly notice it. If Bush is sorry, it’s for the Americans he helped kill and maim, roughly 2 per cent of those who suffered as a result of the invasion. The other 98 per cent are faceless Arabs whose humanity isn’t worth touching on, much less exploring.

All cultures naturally prioritize their own, but the wholesale erasure of Iraqis from Bush’s rebranding tour, framed as “atonement” and “redemption,” is striking in its raw nationalist myopia.

Adam Johnson is a contributing analyst for FAIR.org. This is a slightly edited version of an article originally published at FAIR.org.