Walk on the wild side of a gentrifying city 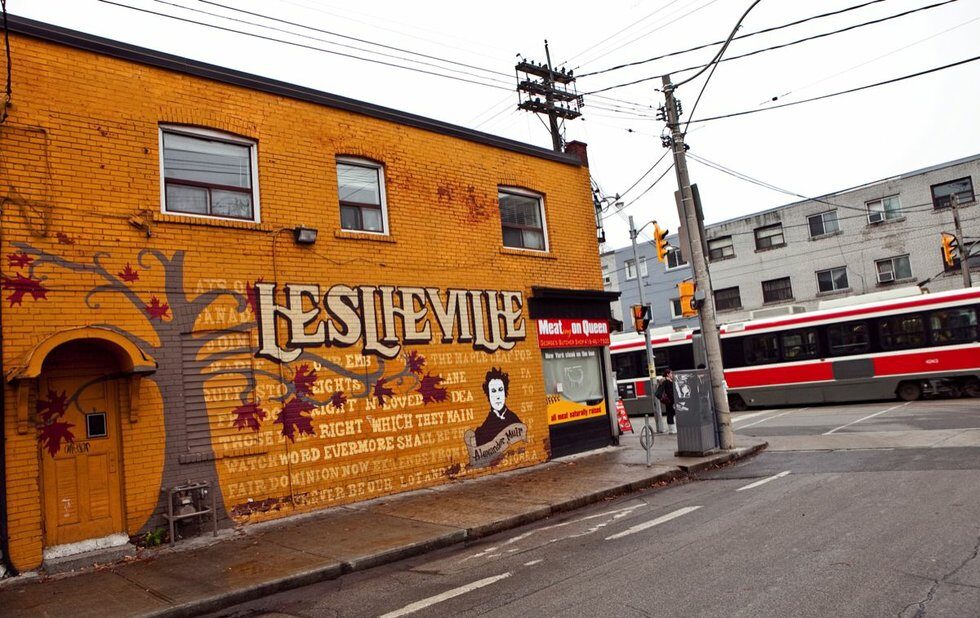 Gentrifying neighbourhoods like Leslieville make it harder to connect to nature in the city.

The streetcar turns me into a misanthrope, so I bike or walk to work each day. My path is right along Queen Street: from gentrifying Leslieville past Moss Park, downtown to a few blocks east of Spadina and back again.

I am continually trying to find sustenance in Toronto’s natural world. There’s the Leslie Street Spit and the Brick Works to visit on weekends, both semi-natural places heavily imprinted by humans (the Spit a garbage-dump-turned-conservation-area, the Brick Works an old industrial site). In their own way, they each deliver: the Spit a calming expanse of lake and a plethora of birds, the Brick Works a guaranteed turtle sighting in summer.

But that still leaves the rest of the week. The staid versus rougher parts of my route to and from work have trade-offs. The shops along Leslieville bore me while Queen and Sherbourne is full of despair.

Once I saw a sign pointing into a pub that read: “This way beer. That way, dunno, could be bears!” This made me smile but underneath I thought, “If only!” The news of a bear shot while wandering into Scarborough drained it of all humour.

The importance of our connection to nature and wilderness could be found in the smallest things, like a spider’s web. But that’s not quite cutting it for me in the city.

There are always a few nice moments – a bush filled with amazingly camouflaged and chattering sparrows cheered me on a grey day. Once I saw a hawk hopping from tree to tree outside the Moss Park Arena.

But having been lucky enough to have spent a lot of time in the wide-open vastness of Canada’s north I still keenly feel an overall deficit of wilderness.

Sometimes I try to summon those spaces to lay over the landscape before me like a quilt. This doesn’t work, but at least I know they exist – a counter-ballast.

So instead, I’ve tried to find other things to gladden my heart, things to celebrate and look forward to. I’ve been surprised by what they’ve turned out to be: the traffic light in front of the Eaton Centre – the way it blooms into green more brightly with each step.

The opposite is true for the TORONTO sign in front of City Hall, whose colours I’ve never seen change – like the pandas in the Kit Kat commercial that come out to dance whenever the unlucky observer stops watching.

There are also random encounters that provide moments of happiness. Once I saw a man unwrap with loving care a handkerchief full of pizza crust to feed to some pigeons. Another night on my way home I spotted a subway token in front of a shelter. I pocketed it and the next morning handed it back to a man waiting for the doors to open. His genuine surprise and pleasure at the small act made my day.

I optimistically make eye contact with everyone I pass I watch the trees I sidestep the vomit I make it to work I make do like everyone else.

Rachel Plotkin is a wilderness and wildlife campaigner with the David Suzuki Foundation.