NOW MagazineNewsWalking the walk in Copenhagen

Walking the walk in Copenhagen

Peaceful demonstrations continue at climate conference, but much still unresolved 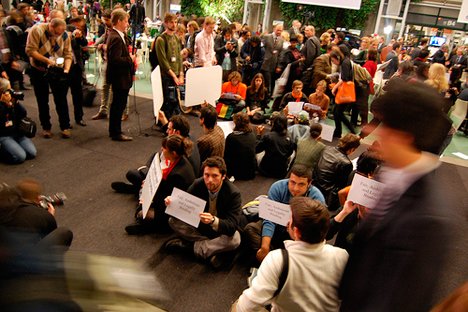 A sit-in at the Bella Centre. Photo from here.

A sit-in at the Bella Centre. Photo from here.

It has been a banner day in Copenhagen, so to speak.

Protestors stopped the subway system for a time with a sit-in on the tracks, staged a raucous walk-out from the Bella Center where negotiations are taking place and they are on the street by the thousands facing pepper spray from over-zealous cops.

Watch out for a new Greenpeace “statement” at any time.

And somehow, even though Friends of the Earth and Avaaz have been completely kicked out of the Bella Center, and the NGO access to the building severely cut back as the heads of state and their ballooning delegations begin to arrive, there are 30 more youths staging yet another action on the inside as a new round of plenary talks are about to begin.

Civil society has not failed these talks. On every level, NGOs and activists have made their presence and their views loud and clear. And contrary to reports, their actions have been overwhelmingly peaceful and productive. But the talks themselves are in a sorry state with so little time ahead and so much unresolved.

The long-term finance issues that have been the huge divide between developed and developing countries do not seem to be moving and thanks to the U.S. and Canada, it looks like there has been backward movement on agreement on emission targets. The long term finance issue could shatter the negotiations but the larger danger is that a deal will get struck here that is not even close to meeting the needs of a science-based approach to the planetary climate danger on the horizon.

It really is a showdown now between the dirty energy lobby and the rest of us. With the recent criminal hacking into researcher emails, we have seen the vast confusion and mis-information campaign the lobby is still able to engineer on a global level despite the complete scientific and experiential evidence of climate change in plain view of everyone. Their power in the Canadian context is evident – they own the federal government. In the U.S., their sway in the Senate has a choke-hold on these negotiations. At this point in the talks, the only hope we have for breaking this hold lies with the U.S. administration.

Of course, if it fails, the U.S. will blame China. But really, it is all boiling down to one thing: Can or will Obama find a way?[rssbreak]