On carding, the Gardiner, and Scarborough transit, the mayor is on the wrong side 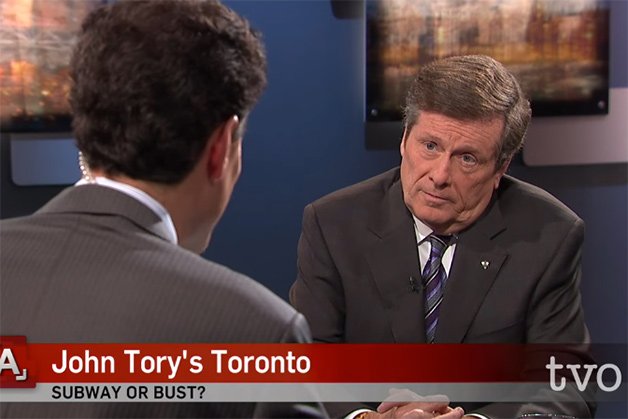 Steve Paikin interviewed John Tory on TVO’s The Agenda last week, and it was quite the show, as the mayor was repeatedly forced to defend his positions on three issues on which he’s arguably on the wrong side: police carding (he wants to salvage it, not scrap it), the Gardiner (he wants to maintain the part east of Jarvis, not remove it), and Scarborough transit (he wants to build a short, unnecessary subway extension, rather than an LRT line that reaches more marginalized neighbourhoods).

The host didn’t give Tory an easy time, and the mayor appeared increasingly uncomfortable and stubborn in the face of the various contrary op-eds and evidence with which Paikin presented him.

It’s worth watching the whole interview, which we’ve embedded below, but the carding discussion starts at 2:26, the Gardiner at 6:40, and Scarborough at 16:20:

On the show’s second half, The Agenda convened a panel that included NOW’s Jonathan Goldsbie – who wrote our recent cover story about Tory – and Spacing’s John Lorinc and Idil Burale (the latter of whom also ran for council in the last election and earned our hearty endorsement). The three were uniformly disappointed with Tory’s positions on each of the issues:

The post-election honeymoon has ended.