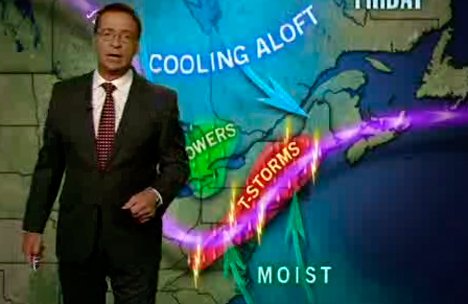 If you like your weather news shouted at you with all the intensity of a football coach, you’ll like Jim Kosek. The AccuWeather.com weatherman is known for energizing his broadcasts with screaming declarations of sub-zero temperatures and long-winded hyperbole.[briefbreak]

This “Bill O’Reilly of the weather world”, as one reporter dubbed him, recently went on another tirade for a Baltimore station, fortunately captured on YouTube. His verbal barrage begins by reporting on 14 to 22 inches of snow descending on the area, and then he escalates the volume by shouting, “Our paralyzing, crippling, record-breaking storm comes TA-DAAAAY!”

He went on: “Tertiary problem, yeah I’ve been reading the dictionary, blowing and drifting AAHHH!”

Kosek finished his report with a non sequitor: “Can I get a one-way ticket to New Orleans? Sun comes back Sunday, Monday. Listen, I love crab cakes but we could replace them it jambalaya.”

On more than one occasion, Kosek has won YouTube love for his shout-reports. A few years ago he gave us the classic “Holy expletive expletive expletive!” session, and then recently we were treated to his anecdote about “falling on your tail end”. And you can’t go wrong with his Providence weather report featuring some maniacal dancing and random screaming.

Kosek says he doesn’t want to be a boring ol’ weatherman. Jim has admitted on air that it’s OK to be “juiced, tanked, a little under the influence” while delivering the news. True, but going batshit crazy might alienate viewers who just want to know if it’ll rain tomorrow. Their ears begin bleeding when Kosek starts screeching the five-day forecast.

An interesting P.S.: did Family Guy creator Seth MacFarlane use Kosek as his inspiration for the show’s shouting weather reporter?