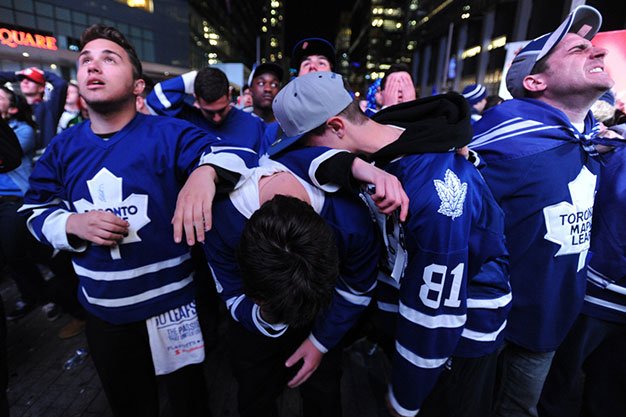 Long have sports fans in Toronto been subjected to sadness, disappointment and misery.

Save for two World Series championships by the Blue Jays in the early ‘90s, no sporting franchise here has given the city much to cheer about in the past three decades, leaving fans wondering if we’re the most disappointed in all of sport.

Well, not quite. But according to new evidence, we’re close.

According to The Misery Score, published Tuesday, Toronto is the second most miserable sports city in North America.

Developed by The10and3.com, a website that visualizes statistical data about Canada, The Misery Score determined the most miserable sports cities by analyzing the failure of their professional franchises.

To come up with the The Misery Score, the people at The10and3.com looked at cities with at least three teams in the four major professional sporting leagues (NHL, NBA, MLB, NFL).

The teams were then given one demerit point for each year since they last made the playoffs, they last won a playoff series and they last won a championship in the past 30 years. Then an average was taken of all the professional sports teams in a given city.

“We wanted to do this in a rigorous fashion — no punditry or judgment calls — and include all major sports cities in North America,” the report read.

Cities with two or more teams in a particular league were further divided by fan base and geography. For example, New York City B consists of the Mets, Jets and Islanders while New York City A has the Rangers, Knicks, Yankees and Giants.

This finding shall cause little shock and only head nods from sports fans in Toronto – possibly dismay that the city didn’t come in first – especially as the Leafs near the end of another disappointing season that sees them out of the playoffs (again) and close to the bottom of the league (again).

Not to be overlooked are the Jays, who were once a point of pride with their two consecutive rings, but are now in the longest playoff appearance drought in all of the four major sporting leagues.

The Raptors, the youngest of the three franchises, have done their fair share to keep Toronto miserable with only six playoff appearances since the team was founded in 1993, with only once advancing to the second round.

However, with the Raptors making it into the NBA playoffs this year, they will most likely drop Toronto in The Misery Score.

The questions that remain are by how much and at this point do we even care anymore.