When it comes to mainstream media coverage of Indigenous issues, it’s almost always in a negative light and without the necessary history to offer any real context or clarity 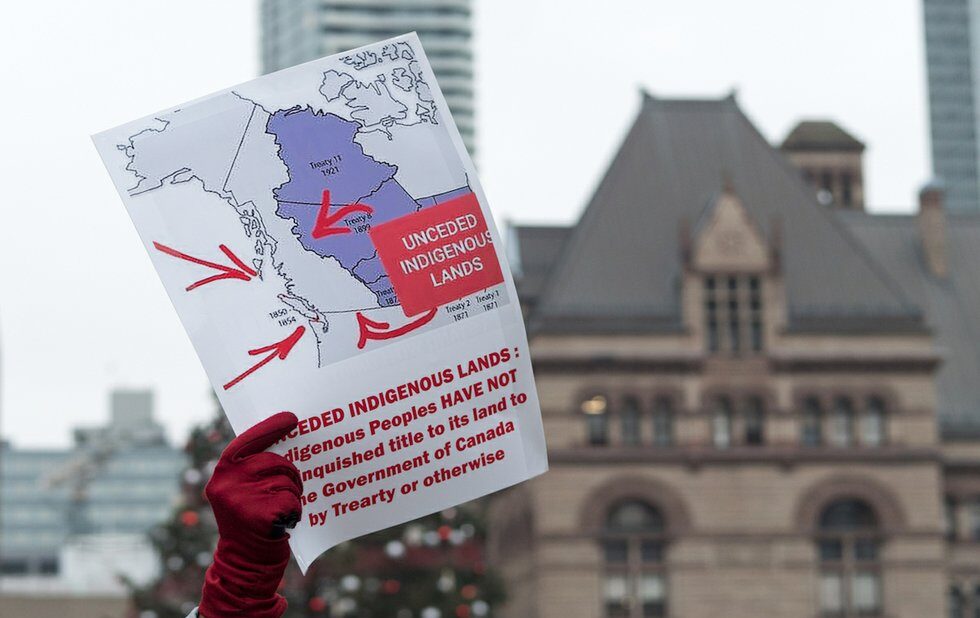 Now that there’s a tentative agreement to (perhaps) proceed with pipeline plans in Wet’suwet’en territory in northern BC, what will the mainstream media do with themselves?

It seems like ages ago that the country had been plunged into a national crisis over protest actions in support of the Wet’suwet’en Nation’s opposition to Coastal GasLink’s fracked gas plans.

Actions along rail lines continued last week, despite the agreement, which was announced March 2.

A blockade set up in Kahnawake near Montreal on February 8 was only taken down on Thursday. Kahnawake’s Mohawk Council issued a statement to say that the decision to remove the blockade was made as a show of good faith as Wet’suwet’en hereditary chiefs consider their next move.

Meanwhile, protestors near Hamilton continued their blockade. But they did not go so easily. They had to be removed by police from their makeshift camp. Similarly, outside the BC Legislature, where Wet’suwet’en supporters have been camped for the last two weeks, protestors were forcibly removed by police on Thursday. Five people were arrested.

Despite the reported agreement between the feds, Wet’suwet’en hereditary chiefs and the province of BC, there’s still a great deal of uncertainty about where negotiations are headed.

But without pictures of masked protestors to fill the six o’clock news, there’s been a noticeable decline in the level of media (and public) hysteria.

It’s long been a truism that Indigenous issues only seem to make headlines in Canada when issues have reached a boiling point and there are protests in the streets.

When it comes to the media’s coverage of Indigenous issues, it’s overwhelmingly in a negative light and without the necessary history and context to offer any real clarity for average Canadians.

It happened with Idle No More, when protests spilled into the streets in 2012 over the Harper government’s omnibus bill threatening environmental protections and national waterways. It happened after the Truth and Reconciliation Commission’s report into residential schools. It happened last June when the report of the National Inquiry into Missing and Murdered Indigenous Women and Girls found Canada guilty of genocide.

And so it was again with Wet’suwet’en, an issue that has been simmering for a decade, only that salient fact – along with the legal basis for the Indigenous opposition to Coastal GasLink’s plans – was largely absent in the early reporting.

From characterizations of the blockades as “illegal,” to descriptions of those taking part in protest actions as “radical activists,” much of the mainstream media coverage, especially by conservative-leaning press (cause they have an axe to grind), has bordered on the irresponsible.

You’d think we’d know better given the crises we’ve faced in the past – Oka, Ipperwash, Gustafsen Lake – and lessons we should have learned from those about how amped-up headlines and ill-considered statements made by politicians can quickly escalate tensions and get people killed. But, apparently not.

Conservative Party of Canada leadership candidate Peter MacKay’s support of vigilante actions at an Edmonton blockade, for example, was bad enough. The dude called the folks behind those “good Samaritans.” The media called them “counter-protestors.” Actually, those “good Samaritans” were neither. They were members of far-right groups, including yellow vest groups and members of the Western separatist “Wexit” movement.

It’s an important context that was missing from the media reports. So it wasn’t the “act of good citizenship,” MacKay claimed. Far from it.

Of course, MacKay wasn’t the only conservative politician engaging in invective to score political points. Alberta premier Jason Kenney, who can hang with the worst of ’em when it comes to tossing grenades into a volatile situation, blamed “angry fringe groups” for the protest actions that he described as a “national economic crisis.” That was predictable. What wasn’t predictable is the liberal Star’s decision to give Kenney a megaphone and blast those precise words in a headline.

Indeed, the media’s overwhelming use of the term “protestors” to describe those taking part in nationwide actions set up an adversarial backdrop for the entire narrative. The mainstream media seemed less concerned about the arrests of journalists prevented from covering RCMP actions in Wet’suwet’en territory. Not to mention, the efforts of OPP to block journalists from the arrests of those taking part in actions on Tyendinaga terriroty.

Worse still, the twisted coverage fuelled anti-Indigenous attacks by online trolls on social media – Twitter was rife with more stupidity than usual – to the point that a number of noted Indigenous commentators took a self-imposed hiatus from the social media platform. It got so bad that noted CBC commentator Jesse Wente declared reconciliation dead.

And then there’s the National Post. The official organ of conservatism in Canada, which had been going hammer and tongs on the blockades, weighed in at the height of the controversy with a front-page story on February 25 to declare that “Canada is broken.”

The proof of that? An online poll of a panel of 1,511 Canadians conducted for the Post by polling outfit DART & Maru/Blue. If it’s a reaction the Post was after, then it worked. The article elicited much vitriol online, most of that directed at Justin Trudeau for his supposedly weak handling of the blockades. (That was before he said the blockades needed to come down.)

There was little information offered by the Post on the methodology used to collect information for the poll. As is often the case with polls, it’s not so much the numbers but those analyzing the results that get it wrong. In this case, the main conclusion (Canada is broken) was also based on a loaded question.

The timing of the poll couldn’t have been more supercharged. But the Post’s poll seems to be more a reflection of growing angst and political polarization in the West than anything else.

The poll’s results seem to fly in the face of the Post’s headline. For example, on the question of protest actions, half of those surveyed (50 per cent) while disagreeing with the blockades said they would “stand with Indigenous people in solidarity to give them a voice to solve their issues.”