John Tory unveiled his picks for members of his executive committee on Sunday night, and in the process delivered a. 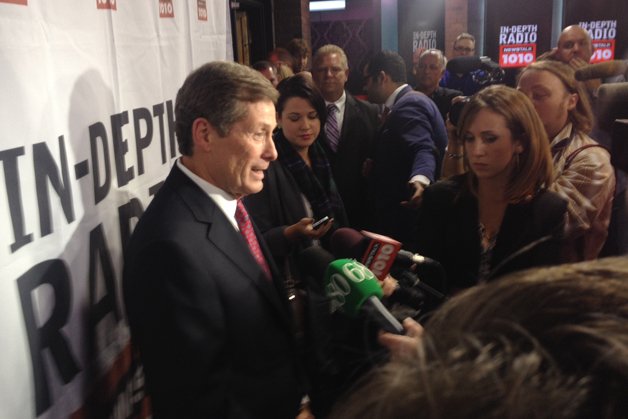 John Tory unveiled his picks for members of his executive committee on Sunday night, and in the process delivered a bracing reality check to anyone who thought the new mayor would allow progressive councillors a voice in his inner circle.

As the Toronto Sun’s Don Peat noted, nine of Tory’s choices for the 13-member committee served on Rob Ford’s executive at one point or another last term, and not one member of council’s left has been invited into the fold.

Most troubling for the city’s progressives are Tory’s picks for deputy mayor and speaker: Denzil Minnan-Wong and Frances Nunziata, respectively.

Minnan-Wong’s council record last term included incendiary speeches against undocumented workers and a protest against abortion rights pioneer Henry Morgentaler. It’s difficult to see how he aligns with Tory’s stated vision for a united “One Toronto.”

Meanwhile, as Ford’s speaker last term Nunziata showed herself to be an ideologue who repeatedly failed to control the Ford brothers’ disruptions and used what’s supposed to be an impartial position to editorialize about council decisions she disagreed with. Why Tory thinks she deserves to return is anyone’s guess.

After meeting with Premier Kathleen Wynne at Queens Park on Monday, the new mayor stood by his picks, saying: I’m comfortable that I’ve done the right thing.

He also pledged that he would work with every single member of the city council to try to make a stronger, fairer city. But its clear some council members are on the outside looking in. Here are the winners and losers of Torys chosen slate:

Norm Kelly: Sources in the mayor’s office have told media that Kelly wanted to step back and sought no role in the new administration. But it’s hard to believe that the former deputy mayor, who so clearly relished his enhanced duties after council stripped Rob Ford of his powers, wouldn’t have agreed to return in some capacity. Instead he reverts to a regular councillor.

Josh Matlow: The St. Paul’s councillor seems a tailor-made Tory ally. He’s politically moderate, socially progressive, and was elected by the largest plurality of any council member by the same midtown constituency that backed the new mayor in big numbers. But although the media-savvy councillor has been waiting in the wings for a bigger role at City Hall, Tory has shut him out.

Giorgio Mammoliti: Arguably the city’s worst councillor, Mammoliti endeared himself to Ford with his willingness to eschew facts and morality in his defence of the former mayor’s far-right agenda, and was rewarded with a prominent position as Ford’s attack-dog and member of his executive. But it seems clear that under Tory the Ward 7 rep, who is currently under police investigation for a suspicious $80,000 fundraiser in 2013, will be left out in the cold.

Rob Ford: Some of the ex-mayor’s backers had hoped Tory would recognize the substantial public support Ford still has by rewarding him with a seat on his executive or even a deputy mayor post. But with former councillor Doug Ford musing about how Rob sitting as councillor for Ward 2 will create a “dual mayor system,” Tory wisely opted to limit his influence.

Kristyn Wong-Tam: If Tory had wanted to send a clear message about reaching out to council’s left, he could have selected this business-friendly progressive to head up one of the less powerful committees, like Community Development and Recreation. But although she and Tory were seen on the campaign trail together, apparently their relationship isn’t strong enough to secure her a role in his government.

Gord Perks: Similarly, Tory could have given a nod to council’s progressives by appointing Perks to head the Parks and Environment Committee. He’s one of council’s most knowledgeable members and sat on the committee under Ford. Instead, Scarborough councillor Michelle Berardinetti, whose grasp of council’s mechanics is much less impressive, got the job.

Denzil Minnan-Wong: The crowded field of conservative candidates forced Minnan-Wong to stay out of the mayor’s race this year, but he now finds himself in the second most-powerful position at City Hall. Not only that, Tory has tapped him to sit on the board of Waterfront Toronto, giving him a chance to influence an organization he has criticized as wasteful.

Shelley Carroll: The only member identified with council’s left to get a statutorily meaningful role under Tory, Carroll has been chosen to serve both as deputy speaker and a member of the police services board. It’s not the budget chief role she may have hoped for, but it will keep her satisfied.

Pam McConnell: Although the job is largely symbolic, Tory has selected the veteran progressive to serve as one of four of his deputy mayors (Minnan-Wong is the only one with real powers). More importantly however, Tory says he has asked her to lead council’s efforts to create a poverty reduction strategy, an issue on which McConnell is capable of making a real contribution.

Josh Colle: After losing out to Maria Augimeri by only two votes last term, Colle looks set to finally get his hands on the TTC chair position he has long coveted, which will be more meaningful than ever as Tory tries to restore bus service and push his SmartTrack plan through council. It’s the perfect platform for Colle, who some see as a future mayoral contender, to raise his profile.

Ana Bailao: Bailao has come a long way since October 2012, when her career seemed in jeopardy thanks to a drunk driving charge that came after a night out with casino lobbyists. Not only does the second-term centrist find herself on Tory’s executive list as a member at large, but the mayor has also asked her to continue as head of the affordable housing committee, where she has done vital work.

Frances Nunziata: The York South-Weston councillor probably can’t believe her luck. After a tenure as council speaker that was widely criticized, the hardcore Ford ally finds herself back in the cushy position this term.