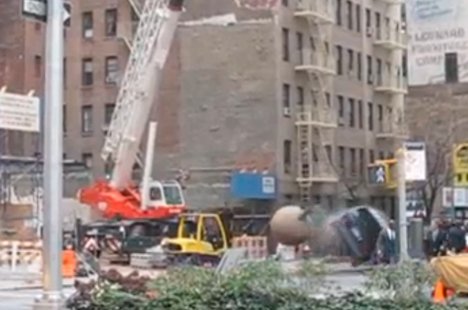 Sometimes comments can reveal more about a YouTube video than the video itself. Case in point: a recent video of a wrecking ball smashing into a minivan in Manhattan.

The uploader’s description makes it sound like the accident truly happened.

The clip is extraordinary – the ball whacks into the side of the car, it flips on its side and pedestrians exlaim “Oh my God!” But read the comments on both YouTube and BuzzFeed and you get the real story – crew are filming a movie scene for The Other Guys, starring Will Ferrell. One commenter points out a director (or someone) yelling “cut” at the :15 mark. Also, on BuzzFeed we’re alerted to a plank under the minivan to help it flip on impact.

Finally, a commenter tells us to search for “other guys wrecking ball” on YouTube to find another clip of a wrecking ball smashing into a jewelry store, supposedly another scene in the 2010 film.

Also, for some strange reason, HasidicLife (?) warns you not to repurpose the clip or your YouTube account will be suspended. (We’re not so sure about that.)

So the filmmakers are trying to get some viral marketing out there about the flick, or the guys behind HasidicLife got punked.

Either way, the truth leaks out through the comments section, a crowdsourced investigation that is not unique to just video clips. Citizen journalism allows Internet users to find out what is truly happening.

It’d be illuminating to see more behind-the-scenes clips from films in production. We all know Toronto attracts its share of film crews, so in the comment section let us know if you’ve seen any recent scenes in action.[rssbreak]