Draft of the Copenhagen deal still has no exact targets 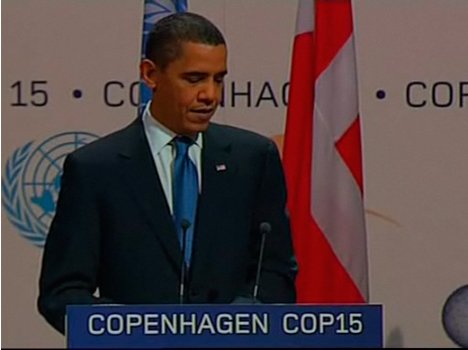 President Obama raised expectations last week, when he decided to ride in at the end point of Copenhagen’s historic opportunity to address the unprecedented issue of climate change. That just made his speech to the plenary this morning, all the more disappointing.

There is no doubt that Obama gets what is at stake here but in his speech, he failed to offer up any movement on the key issues especially the hopelessly inadequate target that the U.S. has brought to the table. Still, he is knocking heads with a select group of world leaders today and there are rumours that he might spend the night. Discussions with China in particular are rumoured to be progressing. And the deal itself looks like it will happen.

NOW has an unofficial draft text in hand from earlier this afternoon which still has an “x” in the place where the total emission target for 2020 will be filled in, likely based on an index tallying the individual commitments of each nation involved.

Both the base years of 1990 and 2005 are mentioned. It also affirms the already well-known fast start financing commitment of $30 billion between 2010 and 2012. The 2050 worldwide emission target in this document is an underwhelming 50 percent below 1990 levels. And the slightly loose commitment to raising that to $100 billion yearly by 2020 is based on the development of alternative financing arrangements.

Certainly high level delegations have been asked to stay and continue negotiating until late tomorrow or even early Sunday. There is likely good news that the huge number of parties involved will find some new level of common ground. It will most certainly be less than hoped and less than required to keep dangerous temperature rise from occurring. But high on the radar is the possibility of a new round of talks in July as opposed to December as officially planned. This is a possibility that was widely discussed pre-COP as a way of dealing with the U.S. President’s major Senate political dilemma.

Tuvalu, the ocean state that is already drowning in sea level rise, has just put the option on the floor during the plenary session.

Of course, this extension of talking not doing is the kind of outcome Harper was hoping and agitating for. Lots of oil CEOs are no doubt smiling in relief. And in return, today, by vote of over 400 international NGOs from the top environmental organizations on the planet, Canada was named Fossil of the Year which was pretty fun for such a sad event (watch video). Watch for it to play big on the National tonight.

While Harper pretends that he is merely following the U.S. lead, he is doing no such thing. The difference between the two is that Obama is doing more than he is willing to promise and Harper continues to have promised more than he has any intention of doing.

And since hope springs eternal…. a demain.

UPDATE: A flurry of excitement has shot through the tired press corp hanging in at the Bella Center as news has come in that a deal will be announced tomorrow – I will keep you posted.