NOW MagazineNewsYear In Review 2018: Danforth stands strong in the face of anti-Muslim hate

Year In Review 2018: Danforth stands strong in the face of anti-Muslim hate

The Danforth opened its arms to spread a message of hope over hate after one of the worst tragedies in the city's history, but as the neighbourhood continues to heal anti-Muslim sentiment is once again on the rise across the country 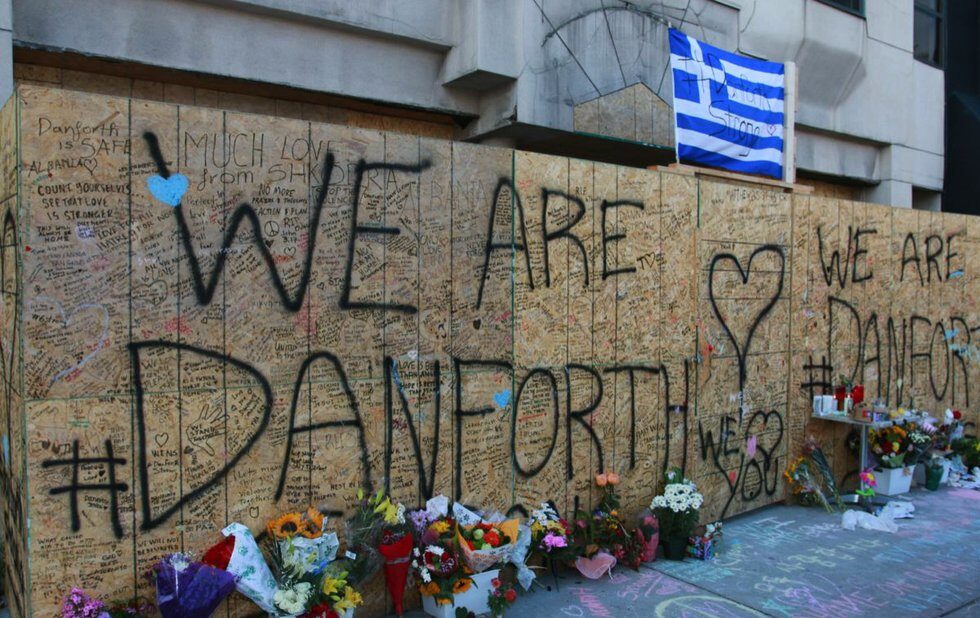 It would be a warm summer evening like no other in Greektown.

Folks strolled the Danforth and families enjoyed late Sunday dinner on patios along the popular tourist strip. But a scene that had played out thousands of times before would be interrupted at around 10 pm by gunfire, leaving two people dead and 13 others injured.

In the minutes that followed, a tweet warning not to read too much into early reports of a possible terrorist attack started making the rounds. A good thing, given how much got lost in translation the last time Toronto was confronted with a similar tragedy – the van rampage on Yonge Street in April that killed 10 people and injured another 16.

Still, some among the mainstream media tried to stir fear with too easy narratives that this was another ISIS-inspired attack like Paris or London.

It ended up being more complicated than that. The shooter, Faisal Hussain, had reportedly taken his own life in a nearby alleyway.

As the city recovered from the shock in the days that followed, some of the usual suspects among Canada’s far-right tried to turn one of the worst tragedies in the city’s history into a lightning rod for anti-Muslim hate. In the attack’s aftermath, assaults against Muslim Canadians spiked. A similar increase in attacks against Muslims occurred after the Parliament Hill shooting in 2014 and in the wake of the Quebec mosque shooting in 2017, despite the fact the victims in that attack were all Muslim.

The Danforth neighbourhood opened its arms despite the overwhelming loss to spread a message of hope over hate when an anti-Muslim protest against “New World Order and Sharia Law” in September was confronted by a larger counter-demonstration organized by local Stew MacDonald.

But as the Danforth heals, hate against Muslims continues to spread. According to a recent Abacus Data poll, one quarter of Canadians surveyed believe the country would be “better off” without Muslims. That number rises to 35 per cent among supporters of the Conservative Party of Canada, which under leader Andrew Scheer has unabashedly embraced fake news to win in 2019.

Time for the rest of the country to follow the Danforth’s example, but will it?