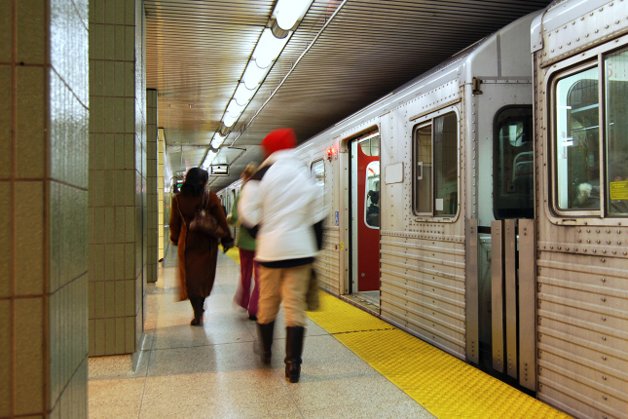 Toronto police have arrested and charged a York University professor with two counts of sexual assault after social media users identified him as a sexual offender on the TTC.

The accused, who reportedly turned himself in to police, was charged on Thursday in relation to two incidents that police say occurred between January 3 and January 16. He was first identified through a social media post after a man allegedly assaulted a young woman on the subway on the morning of Thursday, January 16.

Instagram user @inked_mamii was on a train heading northbound on the Yonge line when one of two alleged incidents for which the man has been charged occurred. She shared the man’s photo in an Instagram post and described the man sitting beside an adolescent teen, believed to be between 16 and 18 years old, on a nearly empty subway car.

According to @inked_mamii, who spoke to NOW after the incident but does not want to be publicly identified, the target of the alleged assault had her eyes closed and was listening to music when the man sat down next to her, put his jacket on his lap and allegedly assaulted her.

The target of the attack moved away before using her phone to take a photo of the man, who reportedly then ran from the train. The woman shared the photo with @inked_mamii, who posted the photo online with a warning to riders. The post went viral.

“It wasn’t supposed to be about serving justice,” says @inked_mamii. “I felt like I failed this girl. I was sitting right in front of her. He did that right under my nose.”

“My mother works with abused women and children,” she continues. “This is really familiar territory for me. When she described the way he did it, I took the risk of posting it [the man’s photo]. I believed her.”

York University administration weighed in on the alleged assault shortly after 8 pm on January 17, writing in a tweet that the university was aware of the reports and was taking steps to investigate with police.

While some social media users posted comments doubting the allegations, @inked_mamii says other women messaged her alleging acts committed by a man with a similar appearance. They too had photos. According to @inked_mamii, at least five women she knows have filed formal complaints with police. She says she has personally accompanied two of them to the police station.

One is an international student who has no family in Toronto and alleges that she was assaulted by a man on January 16 as well. Police say they have recovered TTC surveillance footage from the alleged incidents.

“My reason for posting the photo was so that other women could keep an eye [out] for this man. I didn’t know where this was going to go. I just wanted to protect other girls,” @inked_mamii said.

As her post went viral, it also gave voice to other women who say they have been the target of similar assaults on the TTC.

She read out a few of the messages during an interview: “I got groped the other day by someone.” “Someone pressed their privates up against me.”

“Maybe it’s an accident,” she says. “But sometimes guys use that as an excuse to touch us. And they’re getting away with it. Hopefully, this freaks them all out.”

“Just seeing how many people care enough to share (the post) shows that people still care about this city.”

York University lecturer Nicolae Stefan Pop, 51, has been charged in relation to two incidents that police alleged occurred between January 3 and January 16.