Radiohead release a newspaper in Toronto

Coinciding with the hard copy release of their new album, The King of Limbs, Radiohead (or their delivery team) is handing out a free newspaper, The Universal Sigh, in 62 select cities worldwide. Toronto is one of them.

Local fans will be pleased to discover that the paper, the brainchild of collaboration between Radiohead’s five members and artist Stanley Donwood, will be available Tuesday at the northwest corner of Yonge-Dundas Square. 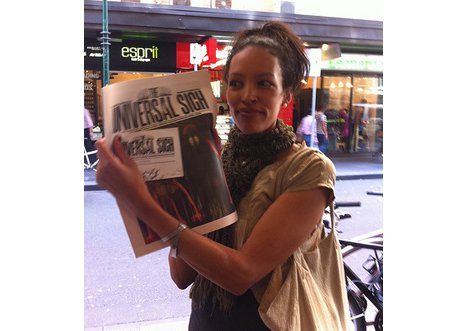 In London, where the album and paper dropped Monday, ecstatic fans lined up to get their copy delivered personally by lead singer Thom Yorke.

Initial reports from the U.K. say the paper contains a story by landscape writer and academic Robert Macfarlane about climbing trees and dark images of ghosts and trees. (A newspaper, but “news” may be a loosely employed term here).

Radiohead will be measuring the carbon footprint of the paper and offsetting it by “retiring” the carbon credits used. Read more about that here.

To get your copy of The Universal Sigh, visit the northwest corner at Yonge-Dundas Square at 1 p.m. sharp, tomorrow, Tuesday, March 29. Remember: copies are limited. NOW will see you there.

Watch this space to see what’s inside the mysterious paper!