NDP leader Tom Mulcair talks up the growing gap between rich and poor, the “Trudeau factor” and why he’d make the best PM during a Toronto stop on his recent whirlwind tour of the GTA 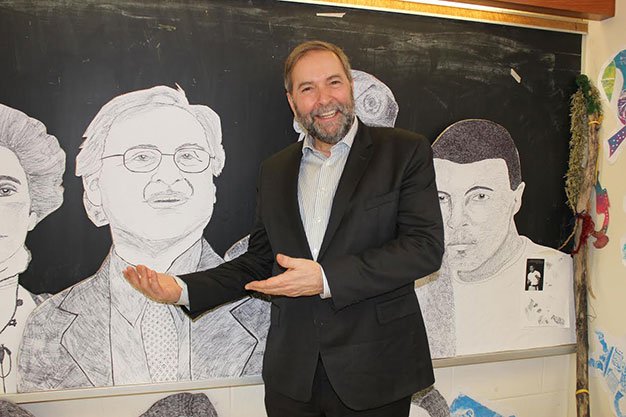 The walls of the room where NDP leader Tom Mulcair would soon be holding a townhall-style meeting with students at East Alternative School, are lined with larger-than-life drawings of the pupils’ heroes: Mahatma Gandhi, Martin Luther King Jr., the Dalai Lama, even Michael Moore.

Mulcair shared with Grade 7 and 8 students at East Alternative the story of how his passion for politics began at a very young age. He encouraged them to stand up for their beliefs by taking part in democracy.

And on this day they did, the students peppering the federal leader on some weighty issues, including his party’s stance on the Keystone XL pipeline, First Nations, poverty, marijuana laws and promoting peace while fighting terrorism. Mulcair sat down for a one-on-one interview with NOW afterward to talk about his jobs plan for the middle class and the upcoming election.

You mentioned during your conversation with the students how this generation would be the first not to earn as much as their parents. What does this reality signify to you?

It raises the question of how we got here. The middle class is making less than ever before. We’ve got the largest household debt in history, and middle class values are being killed off. Stephen Harper’s solution is to take money from the middle class – billions of dollars ­­– and give it to the richest 15 per cent, which can only increase inequality. We’ve got a clear plan for fairness and people are starting to take notice because they know we can actually do it.

What are the NDP’s plans to tackle income inequality? What is #upthewage?

A lot of people don’t realize that right now across Canada a couple with two kids working full-time at minimum wage are living below the poverty line. I don’t accept that as inevitable. Government has a role in fixing that.

By raising the minimum wage to $15 an hour what you are doing is immediately putting money in the pockets of people that are going to spend it. It’s going to make its way back into society, so you are actually encouraging growth in the economy.

The federal government used to have a minimum wage, but the Liberals got rid of it almost 20 years ago. Even though the total number of people under federal jurisdiction is not that high, it’s a clear signal to the provinces and the territories of what a fair living wage should be. We are going to make it a priority.

Some polls are showing the NDP losing ground to the Liberals. What are your thoughts on this?

I have a special place on my desk where I keep the polls that were published in the two weeks before the last election that showed us in fourth place in Québec, and of course we won 59 seats, so I take them with a grain of salt. Campaigns count for a lot. People will be looking at the NDP differently than they ever have. We are the Official Opposition. We are the ones that can defeat the Conservatives and we are the ones with a clear difference.

What about the “Trudeau” factor?

When I watched Conservative MP [Eve Adams] switch sides and join the Liberals I think Mr. Trudeau thought that he was pulling a really smart move. But I’m not so sure that it has been a smart move in the light of day.

If you think about it for a second, this [Adams] is somebody who has faithfully supported every single thing that Stephen Harper has done for the past nine years and has mocked the Liberals, and yet Mr. Trudeau sees an opportunity and just welcomes her in.

What he is communicating is that there is not much of a difference between the Liberal and the Conservative agenda. If people want change, the way to get change is with the NDP.

Why would you make a better Prime Minister than the other candidates?

We have a clear plan and we are putting ideas on the table. Whether it’s moving the retirement age back from 67 to 65, or helping the middle class by creating the next generation of well-paid jobs.

People know my track record on sustainable development and the environment. They also know that we are not going to say one thing and do another. The Liberals excel at telling people what they think people want to hear and then doing something else once they are in power.

Does the NDP plan to continue advocating for proportional representation?

We are the only ones talking about it. The Conservatives and the Liberals are against it. It’s also interesting as an ethical proposition. We are proposing something that would have actually reduced our number of seats in the last election, and would have brought, for example, the Green Party up. But that’s what a position of principle is, right?

Speaking with environmentalist Bill McKibben at the People’s Climate March in New York City last September he called Stephen Harper’s Canada “a rogue nation,” in regards to its climate policy. Do you agree?

It’s a fair statement. Mr. Harper once said that the Kyoto Protocol was a socialist plot to suck money from rich countries. When I quoted that back to him instead of feeling the slightest shame his caucus erupted in applause. They were all proud of the fact that Canada has become the only country in the world to withdraw from Kyoto.

Why do you think we have seen so many cutbacks and closures in programs that monitor things like water quality, food inspections, oil spills and climate change?

Fact-based decision-making is one of the best tenets of good governance. Unfortunately, Mr. Harper practices decision-based fact-making. He will go about looking for anything that comforts him in making his decision literally dismissing the scientists who didn’t tell him what he wanted to hear. I mean, why do you kill the long-form census? There’s a method to their madness. It’s [all about] the dismantling of the state’s ability to provide services.

Why should young people get involved in politics?

It was a big concern to everybody who was watching the 2011 election to see that two thirds of young people aged 18 to 25 stayed home. It’s the most engaged young generation in history, but they are engaged in different ways so sometimes they are not convinced that what’s happening in Queen’s Park, Ottawa or Québec City is of great concern to them. One of the things I am most proud of about the 2011 election is we now have many young people working with the NDP. They are a message that you can get involved and be a part of producing positive change.