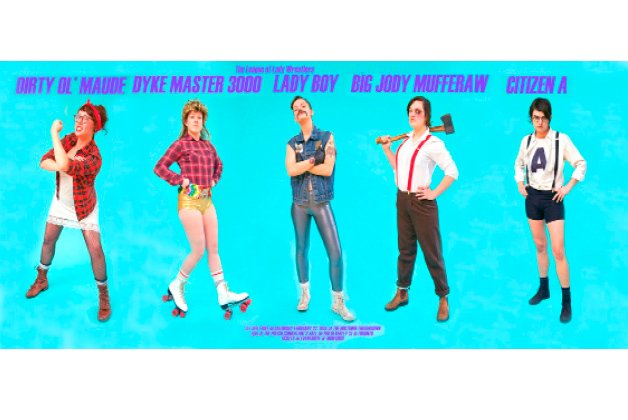 The League of Lady Wrestlers

Pro wrestling action and the art-sleaze aesthetics of John Waters collide in The Hogtown Throwdown. The League of Women Wrestlers, the name temporarily taken by a women’s art collective from the Yukon’s Dawson City, is bringing live lady wrestling to the Polish Combatants Hall on Saturday.

Their cast of self-created characters will trade hammerlocks, pile-drivers and signature moves such as the Silencer, the BFF Hug and the Doomsday Bunkie.

The League bill themselves as a community-engaged art collective responding to gendered stereotypes and inequalities. They perform their riotous wrestling hijinks in what they call a celebration of feminine identities.

The accent is on comedic subversion. Take the magnificently mulleted, roller-skating Dyke Master 3000 (with her “laser poon”), the seemingly geriatric, walker-wielding Betty Whoop, or the axe-swinging, red-suspender-wearing Big Jody Mufferaw. Nor should we omit the blood-curdling war cry of founding member Shreeeka, a black-hooded eminence who appears to have been taken whole out of a Wiccan underground comix nightmare.

Along with a much larger roster of characters, they promise to deliver a full evening of nail-biting, gut-churning, knee-slapping wrestling action.

Currently fundraising on indiegogo to rent a proper ring (in which to do aerials), the show also includes trading cards, T-shirts, autographed headshots, buttons and personalized merch. There’s also a half-time show, surprise appearances and a medley of dramatic storylines. It’s all part of the wrestling experience.

So what are they fighting for? In the words of the league: ” We battle for justice.” If you have a problem with that, yoga warrior Barbara Shalala just might “put you in corpse pose for good, namas(t)ay’in?”