No need to settle for fake progressives 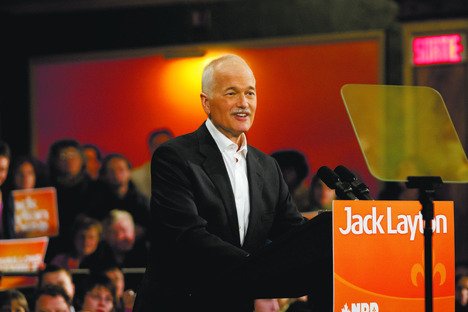 My question to the strategic voting gang is, So when are we allowed to vote for the NDP?

The leader of the Liberal Party of Canada, falsely being sold to voters as some kind of progressive, was simply stuffed in as head as they hustled Stéphane Dion, the guy who was being too progressive, out the door.

The Liberal spin-masters might have had better luck with stone-faced, mighty-browed Iggy if they’d embraced his inner intellectual and sold him, à la Pierre Trudeau, by the size of his brain instead of making incredible claims about the immensity of his heart.

Canada is not warming up to this cool leader.

Meanwhile, Jack Layton was seen by many to be the winner of both the English and the French TV debates last week. And he is generally dubbed the most trusted leader by Canadians not already voting for Stephen Harper. The NDP is the most popular federalist party in many parts of Quebec right now, is battling for top spot in BC and is making noise in the rest of Canada.

But here we are again being told to hold our noses and vote Liberal because they’re not as bad as the Conservatives – because if you don’t, nobody else will, and the Conservatives might finally steal their majority.

We’re being told to vote for the Liberals when they haven’t made a compelling case for us to want to do it on their merits. The strategic voting clan only wants us to vote NDP when the Libs are a lock.

I’m just not that cynical, and I don’t believe elections are a math problem. Sometimes results don’t add up, but breakthroughs happen, and real change occasionally takes place.

Harper and Iggy are not that different.

They’ve had us happily mired in a pointless war in Afghanistan. Liberals joined Tories to vote against funding for women’s choice organizations. The Liberals were in power for years, and a huge bloc of Toronto MPs did nothing. Remember the national daycare program, anybody?

Astoundingly, Liberal MP Mario Silva completed a PhD from Oxford while serving as MP for his west-end Davenport riding – perhaps the most egregious example on the long list of do-nothing Grit MPs from Toronto.

Telling progressive Canadians to vote Liberal to stop the Conservatives is cynical and simplistic.

Many Canadians who are newly supporting the NDP this election are energized and galvanizing around the one truly progressive party in this country that they can believe in rather than put up with.

If we spend the last two weeks of this campaign looking for progressive candidates we can trust and not getting hustled into empty choices we might all be surprised to find ourselves waking up to a Canada we can believe in, too, on May 3.