No refuge for Roma 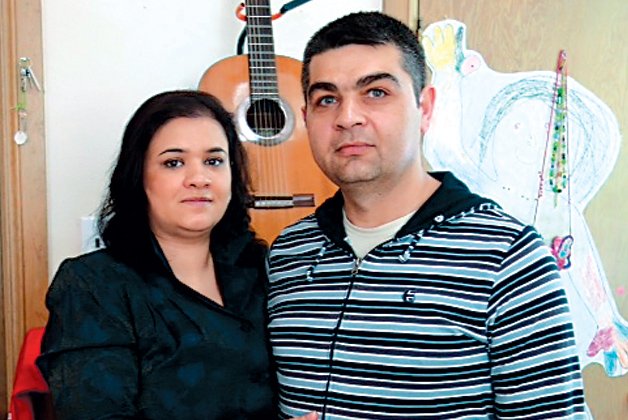 On a sunny Saturday afternoon, May 24, my wife, Karyn, and I make our way to the Toronto church that’s been providing sanctuary for the Pusuma family for over two years.

Jozsef and Timea are there to welcome us, greeting us with warm smiles and sad eyes. Their six-year-old, Lulu, is in her ballet costume. Today is special: she and other children from the church are putting on a small dance recital.

Timea serves a goulash whose recipe she tells me her grandmother passed down to her. It’s been in the family for generations. She loves her grandmother, with whom she often Skypes. The older woman would love to hold her and Lulu in her arms, but she’s made them promise never to come back to Hungary. She knows.

Lulu says she and her family are in hiding from the “bad people” who want to send the family back to Hungary, where they would be in danger.

Sadly, we Canadians, we are the bad people. A callous Harper government has engineered the dissipation of the compassion Canadians were once renowned for. Our open arms are closed. Our hearts have frozen.

Jozsef and Timea are Roma. Jozsef has a second strike against him: his father was Jewish. They are also well-known human rights activists in a country where both Roma and Jews face verbal and physical attacks from roving gangs of neo-Nazis.

Indeed, the fascist Jobbik party, which now holds 20 per cent of the seats in Hungary’s parliament, is virulently anti-Roma and only slightly less anti-Semitic.

Jozsef was a hate crimes investigator for the Movement for Desegregation Foundation led by the former European Parliament member Viktória Mohácsi, the leading domestic monitor of anti-Roma attacks and hate crimes in Hungary.

His work took him to towns and villages where Roma men, women and children were being harassed, violently attacked and even murdered by thugs from the racist, paramilitary-style Hungarian Guard. It was his job to document these cases, and because of it Jozsef and his family became targets.

On a quiet weekday afternoon in July 2009, Jozsef, Timea and Lulu, then 18 months old, were out for a stroll when they were attacked. Jozsef and Timea were badly beaten. Lulu was saved only because Jozsef, who almost died, shielded his daughter by lying over her and taking the blows. They were warned that if he continued his work, they wouldn’t be so lucky next time.

They knew they had to leave. Jozsef had heard that Canada celebrates different ethnic and cultural groups, that we welcome and embrace newcomers. He thought Canada would be a hospitable home for his family.

Sadly, when he and his family sought refugee protection here, a lawyer hoping to make a quick buck latched on to them. They believed he would help, but he made matters worse.

Though armed with evidence of Jozsef’s human rights work and the danger he faced if returned to Hungary, the lawyer never submitted that documentation to the Immigration and Refugee Board.

In fact, at their hearing, the lawyer never appeared, sending only an interpreter/consultant. Unrepresented and without documentation of their claim, they were handed an order of deportation. The Pusumas would have to return to Hungary, perhaps to their deaths.

It’s little comfort that the Law Society has charged their lawyer, Viktor Hohots, with professional misconduct. And it was no surprise to them that he’s alleged to have defrauded 17 other refugees and their families, all of whom have been deported.

The Harper government refuses to help the family, insisting on their immediate deportation.

More than 200 people protested in front of Immigration Minister Chris Alexander’s Ajax office on Friday, May 23.

The rally was ecumenical, with Jews, Muslims and Christians in attendance. Some blew rams’ horns in front of Alexander’s office in the hope that, like Joshua in the Bible, we could bring the walls of his heart down.

A 40,000-signature petition was delivered to Alexander asking the government to grant the family a temporary residence permit, but he has so far refused.

And so the family remain in their church sanctuary. Fearful of leaving its safety, they have not ventured outside for more than two years.

Before we leave, I ask Lulu if she had one wish, what it would be. Only six years old, she seems to carry the weight of the world on her shoulders.

Lulu looks up to say in a clear, strong voice words no child should utter: “I wish we could be free.”

Go to freelulu.ca to read more about the Pusuma family.