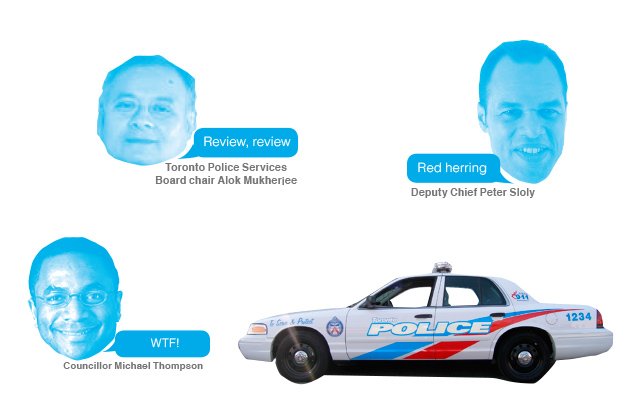 In its quest to find savings in the recently approved 2014 operating budget, council didn’t even pretend to examine policing costs.

Although we spend a quarter of our property taxes on policing (that’s just over $1 billion), trimming the police budget seemed a non-starter for even our efficiency-loving mayor, Rob Ford.

The January 16 meeting of the Toronto Police Services Board, just two weeks before council’s January 30 vote, shed some light on the tricky politics of police spending.

There, the familiar dynamics between the board and top cops, the same impasse that has blocked meaningful budget reductions in the past, were once again on display.

Essentially, the board believes it controls the budget, but TPS believes it has the sole discretion to make on-the-ground policing decisions. The police say the board lacks the expertise to make those calls.

The board in turn looks to consulting firms like KPMG for budget analysis, but that advice usually ends up taking months or years to produce and is sometimes dismissed as ill-advised or even dangerous by police brass.

The board has spent over $1 million on the CIOR, only to identify savings of less than $2 million. Mukherjee noted the paltry sum while adding that overall police spending just keeps climbing.

He then asked the board to approve the hiring of an external consultant, essentially to review the chief’s review, using money, no less, from the city’s 2013 surplus.

Firms like KPMG and Ernst & Young have been hired in the past to find police budget savings, but reviews take time and budget cycles come and go without significant spending changes.

When discussion turned to the TPS’s structure and staffing, Mukherjee suggested interim approval of the TPS organizational chart with the possibility of revisiting it later. Meanwhile, another consultant could review the chart to find savings. That’s when the real fireworks went off.

Deputy Chief Peter Sloly, subbing for the absent Blair, said Mukherjee’s call for a mid-year review was “a bit of a red herring,” since the board

reviews the chart every year.

The city’s legal counsel, Karl Druckman, warned that dramatic changes to the organizational structure of the police force may be illegal.

“The ability for the board to come along a year from now and say, ‘Undo all that because this is how we want it to be done’ is just not realistic and could have legal consequences.”

Druckman reminded board members that it is primarily Chief Blair’s job to set the policing structure and thereby protect the public.

TPSB council appointees Michael Thompson and Frances Nunziata protested that the board is not merely a rubber-stamping body.

Thompson fumed: “If our ideas and our input are of no value, why waste time?

“It seems to me like we’re trying to develop efficiencies, but it doesn’t seem to be going both ways. That has been a problem publicly all along with respect to this organization. The public is wondering, ‘Why are policing costs approaching a billion dollars? What are we getting for it? And what is this board doing with respect to its duties?'”

In the end, the board unanimously agreed to approve the organizational chart and to review and amend it if a consultant can identify savings.

But the lengthy process of external review means next year’s chart may come up for approval before a consultant can report back on any savings in this year’s.

The complexity of the TPS, Canada’s largest municipal police force, means that very few are qualified to review and advise on it.

Those who do are either paid consultants whose work takes time and is not necessarily binding, or police execs who inevitably warn that reducing the budget may in turn reduce public safety.

The already hamstrung civilian board must also accept that about 90 per cent of the police budget is fixed, tied up in negotiated police salaries and benefits.

Part of the CIOR deals with the proper number of police needed to keep the peace. The “right number” report isn’t public yet, but one wonders what chance the public has to influence ongoing police budget discussions if the civilian police board, by its own admission, lacks the clout, know-how and legal ability to do so.