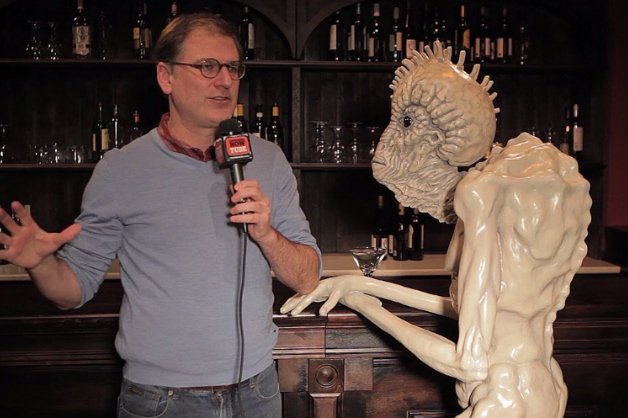 The only way to tell a Bible story is to go all in. Mel Gibson did it with The Passion Of The Christ, relating the last day in the life of Jesus as a baroque nightmare of pain and blood. And Darren Aronofsky does it with Noah, playing out the fable from Noah’s tormented perspective as a man struggling with the demands God has placed upon him.

Also, there are rock monsters.

Look, I have no illusions here. A lot of people are going to have trouble with Aronofsky’s Noah. It swings for the fences, both as a Biblical adaptation and as a disaster movie, and its greatest strengths are going to sound awfully silly when reduced to cold text.

So, yeah, this version of the story of Noah and the Flood has rock monsters and a villain and a barbarian army and all sorts of other stuff that wasn’t in the original. But what Aronofsky has done, in a surprisingly textured and mature way, is acknowledge that the story is, in fact, only a story – and he brings it to life the way he would any story, by digging into the characters and the situation to find psychological complexity and dramatic resonance. It’s the most interesting Bible picture I’ve seen in a very long time.

Aronofsky’s a difficult director to pin down, forever swinging between the wild stylization of Requiem For A Dream, The Fountain and Black Swan and the gritty realism of Pi and The Wrestler. His version of Noah uses both of those disciplines, setting divine wonders in a primitive, ugly world.

It’s a couple of hundred years after the Fall, and Noah and his family – the last descendants of Adam and Eve’s third son, Seth – have carved out a simple existence for themselves, hiding away from the wicked spawn of Cain, who’ve brutalized the land with the unwitting help of the fallen angels. These luminous beings fell to earth and became encased in the muck and dirt, hence their rocklike appearance.

As you may remember, Cain’s progeny so defiled creation that The Creator decided to start over. Noah, touched by prophetic dreams, sets out on the project of building an ark to save the animals and his own family. That’s not much of a story, hence the introduction of a villain – Ray Winstone’s raging Tubal-Cain, who plans to survive the flood in the vessel Noah and his family have built – and the sowing of discord within Noah’s family once his younger son, Ham (Logan Lerman), figures out that the extinction of Cain’s line will leave him dateless in the new world.

Yes, it sounds silly. But it’s played absolutely straight. Even a hint of irony would bring the whole thing down in a heap. That’s why casting Russell Crowe as Noah makes sense. He’s immune to irony, and can’t help but engage fully with the role of a patriarch wrestling with concepts and responsibilities well beyond his pay grade.

Aronofsky’s script, co-written with executive producer Ari Handel, makes Noah a compelling human presence rather than a clear-eyed prophet: they’ve wondered what it would be like to know that the world is coming to an end and what effect that would have on a man. What’s it like to know that almost everyone around you is ultimately expendable? How does it feel to look at a wounded young woman and know that you’re not supposed to help her?

The movie doesn’t back away from these questions, and asks many more. The presence of God is a given, though he’s known here only as The Creator, because the name “God” won’t be spoken after the Flood – and the movie doesn’t dwell on a supreme being’s existence, because everyone believes. (They even have their own rough version of a creation myth, which Aronofsky smartly illustrates in a manner that lets us understand that both it and the story of Noah can be read as an elaborate metaphor.)

Amidst all the green-screen wonders and digital effects, it’s the human story that still matters. And that’s where Noah surprised me. Aronofsky shuts out the spectacle in the second half to focus, intensely, on the people in the boat: Noah, his wife (Jennifer Connelly), their sons and a young woman (Emma Watson) who’s become part of their line, sitting in silence among sleeping beasts as the screams of the dying filter through the walls.

At that point, Noah essentially becomes a taut survival drama. It could be taking place 6,000 years in the past or 6,000 years in the future. The point is that the story is alive and relevant and intriguing, even with rock monsters.