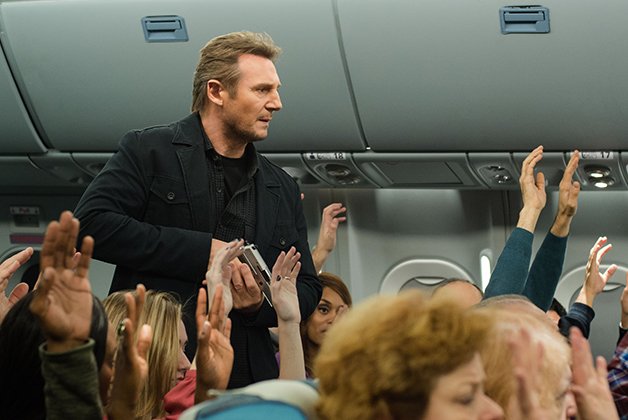 A week after Kevin Costner whiffed the middle-aged-actioner thing in 3 Days To Kill, Liam Neeson is back to show everybody how it’s done. And better still, he’s doing it in a really good movie.

Non-Stop pits Neeson’s alcoholic, depressive air marshal Bill Marks against a mysterious blackmailer who demands to be paid $150 million or he’ll kill one passenger on Marks’s transatlantic flight every 20 minutes.

There’s that nice lady (Neeson’s Chloe co-star Julianne Moore) who finagled the window seat next to him the testy bald guy (Corey Stoll) who keeps glancing over at inopportune moments the overly chatty fellow (Scoot McNairy) with whom Marks shared a cigarette before boarding. Everyone’s a suspect – even the flight crew (which includes Linus Roache, Downton Abbey’s Michelle Dockery and Oscar nominee Lupita Nyong’o) could be in on it.

And so we get to watch Neeson sweat and pace nervously for 20 minutes – in real time, more or less – until the first body turns up, in a fairly inventive way. Non-Stop just gets better from there, escalating the tension with insane plot twists and forcing the characters to react to them with straight faces.

Whether Non-Stop holds up as well in 26 years’ time is a question for another day in the moment, though, it’s an inventive, intense picture with surprisingly fleshed-out characters, a truly subversive message about American security theatre (given all the volatile, potentially lethal crap that makes it onto Bill’s flight) and a refreshing sense of play.

The messages flying between Neeson and the baddie pop up for us in little text bubbles, but they’re subject to real-world interference like turbulence and cracked phone screens.

It’s a little easy to figure out who the real villain is, but so what? The mystery of who’s running the game isn’t as entertaining as the game itself.

Go ahead, strap yourself in.