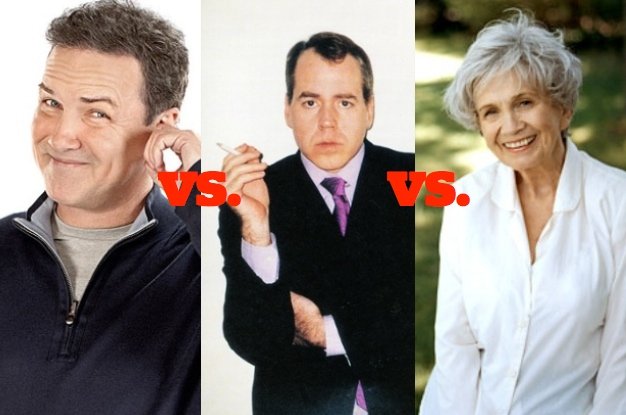 When it was announced last week that Canadian author Alice Munro had taken the Nobel Prize For Literature, there was much rejoicing.

Then there was Bret Easton Ellis, chronicler of American affectlessness, an author maybe best known for writing a scene in which a Wall Street psychopath jams a piece of Habitrail into a woman’s vagina and forces a starved rat inside of her, calling it satire. Ellis has made a sub-career poo-pooing the works of other, more talented writers: most famously David Foster Wallace who, being dead, couldn’t even defend himself against Ellis’ tasteless broadsides.

After the announcement of Munro’s Nobel win, the Canadian author acknowledged by many (including the fucking Nobel Committee) to be a master of the short story, found herself in Ellis’ sights:

Alice Munro is so completely overrated.

Alice Munro was always an overrated writer and now that she’s won The Nobel she always will be. The Nobel is a joke and has been for ages…

Anyway, blah-blah-blah, Bret Easton Ellis is a dick, his cravat’s on too tight, etc., etc., etc. We wouldn’t even bother to report this, as Bret Easton Ellis being a prick-job is a little dog bites man, were it not for the most recent development which saw prodigious golf tweeter and probable funniest-living-human Norm Macdonald rushing to his countrywoman’s aid and giving Ellis a full-on schooling:

Brett Easton Ellis saying Alice Munro is overrated=Beatlemania saying The Beatles is overrated. Not only can he not write, he can’t read.

Boom. Roasted. Go write another piece of precious metafiction about your daddy and how sad the rich people are! Bret Easton Ellis: who’s that dude?!