Not Of and Nice Head at Magpie 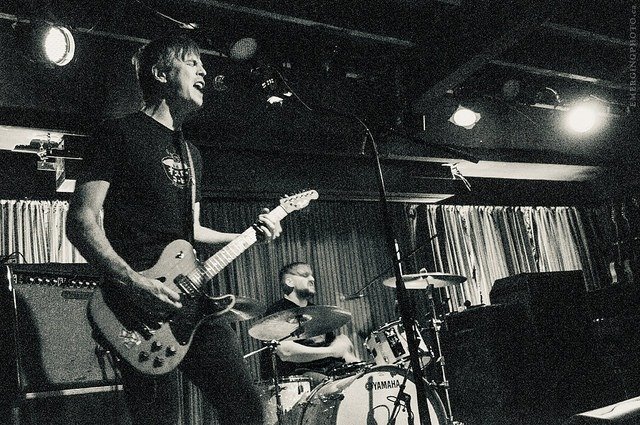 NOT OF and NICE HEAD at the Magpie, Saturday, April 18. Rating: NNN

New Toronto noise rock duo Not Of delivered a tight set to a small but attentive crowd at the Magpie for the launch of their debut album, Pique. Drummer Jason Seance is an animal behind the kit, precise, formidable and very loud. The loudness of the drums meant capital-L loud guitar, too, tackled by John Ex with energy. He gets an impressively full – and surprisingly bassy – sound from one Tele and a smattering of pedals at his feet.

Too bad the P.A. couldn’t keep up. Vocals were virtually inaudible all night. Which was a pity since Not Of’s ambitious songs boast strong vocal melodies that add shape and dynamism. And the low lights were a thorn in Ex’s side, preventing him from properly seeing where to step. But despite a few complaints, the long-time musicians stayed positive and gracious. Pro move. Doing the opposite is, well, nothing but a downer for everybody.

During Nice Head‘s 10:30 pm opening set, their singer used the empty space in front of the stage to pace and rage, like the Hulk stomping through a forest. He hollered passionately, though we could not hear it. The four-piece also play noise rock, but of a punkier variety. Their guitarist is their secret weapon, attacking the instrument with creativity and moving easily between power-chord heaviness and string-bendy fretboard experimentation.

A solid show that might’ve been great in another venue.