Not your mothers bra

Lets face it: bras suck. At best, they turn you into an oversexed male fantasy of what a woman should. 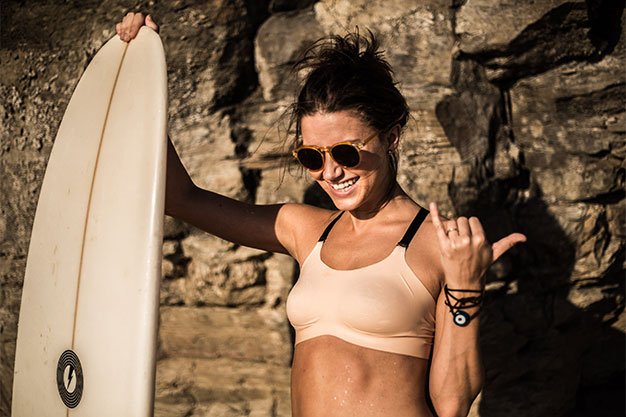 Lets face it: bras suck. At best, they turn you into an oversexed male fantasy of what a woman should look like. At worst, they dont fit, cut into your shoulders, prick you with underwires, leave you with a heinous combination of back pain and cleavage sweat and peek through clothes at the most inopportune times. When it comes to the tough job of holding up boobs, all the lace in the world cant make up for the centuries-old failure of fashion design.

Thanks to local label Knix Wear, thats all about to change. The Toronto-based companys seamless underwear already has a dedicated cult following, but their new Evolution Bra looks set to be a bona fide international hit.

Knix Wear turned to Kickstarter hoping to crowdfund $30,000 to make production minimums for the bra. Over $45,000 sold in two days. At time of print, Knix Wear has raised over $460,000, which, with about three weeks left to go, puts them on track to become Kickstarters number-one fashion project of all time. (The highest-funded womens fashion project rings in at $660,000, the highest-funded mens at approximately $1 million.)

The bra evolves with active women through the day. Its also fully reversible, can be worn eight different ways and comes with an extra set of straps, explains founder and chief Knixpert Joanna Griffiths. Its also moisture-wicking, quick-dry, anti-microbial, odor-free and invisible under clothes. Bonus: its machine-washable and also lasts longer than your average bra.

We brought what we did with seamless underwear and bonded construction into a bra. It mimics the support of an underwire without being uncomfortable, and moulds to your unique shape, says Griffiths. The fit actually gets better over time.

The Evolution Bras exceptional ability to adjust to breasts different shapes and sizes makes it an excellent choice for women who have undergone mastectomies.

The already successful Kickstarter campaign got a huge boost when of all people George Takei posted about it on his Facebook page, sparking a discussion about whether the bra could properly support larger cup sizes. We did over $100,000 in sales in 24 hours. I feel like I need to send him a thank-you note, gushes Griffiths.

Currently the bra has been tested up to an E cup, but Knix Wear plans to address requests for more sizes now that theyve exceeded their funding goals. We need to test it, though, because theres no point in making and selling it if its not going to work. Right now weve tested it on over 70 different women, and every single person who wore it said it was the most comfortable bra theyd ever worn.

Griffiths says one of the biggest challenges is getting online backers and customers into the right-size bra: Were making a digital fit guide and were going to do another round of photography with literally every single cup size, so we can say, for example, this is what a 34E looks like wearing the bra.

The bra has been in development for over a year, and Griffiths and her friends have been testing it for months at a time. We would have 30 or 40 women come over, drink some wine, try on bras and strip down for police-style photos from the front and side, she laughs. Based on their feedback, Knix Wear made several design revisions before launching the Kickstarter in September. I firmly believe women of all shapes and sizes look great in the bra.

The wild success of their crowdfunding campaign has also translated into a source of sales for Knix Wears seamless underwear. The brand has moved over 5,000 undergarments in the last two weeks, which is more than theyd usually sell on their e-commerce site in a full year. This is definitely a game changer for us, which is great, because theres no doubt that this project was a huge risk.

The Evolution Bra will be delivered to Kickstarter backers starting in November. It goes on sale to the public for $65 in early 2016 at KnixWear.com.