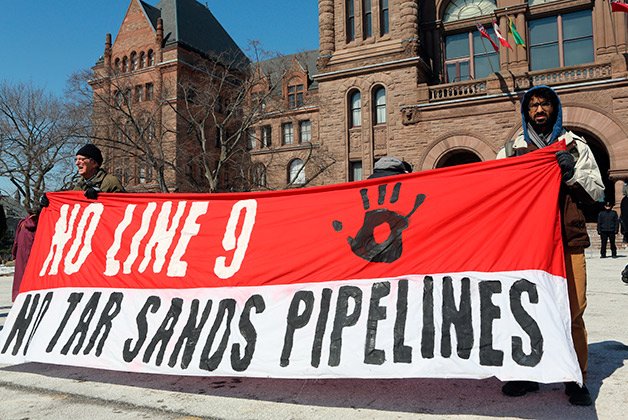 Join the jury Thursday (May 8) in the people’s court trial of HudBay Minerals and convict the company and its CEO, David Garofalo, for abuses in Guatemala and Canada. In Guatemala, the company stands accused of the brutal killing of Adolfo Ich, the gang rape of 11 women from Lote Ocho and the shooting and paralyzing of German Chub. While shareholders inside meet to discuss profits, activists put HudBay Minerals, Corporate Criminals On Trial at 150 King West on at 10 am. Free. facebook.com/events/757394004304839.

JUST SAY NO TO OIL

Rally to defend our climate for the National Day Of Action, No Tar Sands, No Fracking, No Line 9! and support indigenous communities on the front line of struggles from BC to New Brunswick. In BC, First Nations are rising up against companies that violate treaties to conduct fracking exploration. In Alberta, indigenous groups are still fighting the tar sands. Here in Toronto, Line 9 – the pipeline stretching from Sarnia to Montreal that has a 90 per cent chance of rupture – threatens one of our greatest natural resources, the Great Lakes. Help save Canadian communities from dirty energy at Nathan Phillips Square, Queen and Bay, Saturday (May 10) at 1 pm. Free. facebook.com/events/1412880168983337.

Mayworks celebrates the art and ideas of queer/trans people of colour and two-spirit artists who have disabilities and/or chronic illnesses at Crip Your World: An Intergalactic Queer/POC Sick And Disabled Extravaganza, Friday (May 9) at 7 pm. Performers include Mel Gayle, Masti Kohr and Friends, Billie Rain and more. Palmerston Library Theatre, 560 Palmerston. Pwyc-$10. mayworks.ca.