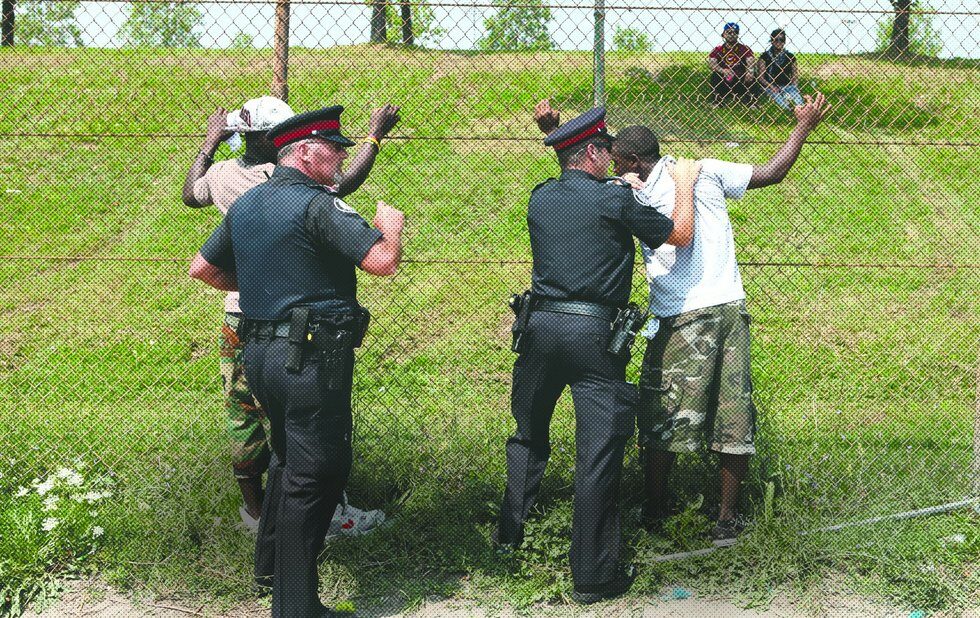 If one person shoots off a gun, that’s an individual problem, but if a whole lot of people in similar circumstances do the same thing, that’s called social breakdown and requires a fine-tuned response. But how fine-tuned is mass police targeting?

Last month the province renewed its commitment to the Toronto Anti-Violence Intervention Strategy (TAVIS) unit made up of officer teams deployed to identified areas, but you’ll notice that not many community agencies are cheering. It seems that the people actually trying to extricate young men from gang culture in troubled ‘hoods find TAVIS a drag on their efforts.

TAVIS likes to pump its community “engagement” and “empowerment” mandate, and, yes, its promo video features basketball games and breakdancing. But the practice of collecting infamous Field Information Reports – aka carding, where police stop and question mostly young men of colour, as it turns out, in order to document names, associates and activities – is tainting other aspects of the Intervention Strategy.

Police spokespeople like to say the only way they can protect neighbourhoods is through an extensive database capable of drawing connections between people and nefarious happenings. There’s evidence, though, that these information sorties are feeding social alienation in exactly the communities that already have quite enough of it. How would locals strolling the streets of the Annex, Riverdale or the Beach feel about being “known to police” thanks to documents gleaned from random stop-and-asks?

The chief is saying intelligent things about police alone being unable to stop gangs, and the importance of social programs for early intervention, but if he’s serious, why won’t he listen when smart frontline folks tell him TAVIS is going too far?

Community workers in priority areas talk a lot about the business of re-building lives overly familiar with normalized violence. At Breaking the Cycle, a Scarborough/Rexdale-based org for youth who have served time, program director Gary Newman explains that staff there start with simple stuff like teaching sleep cycles and how alcohol and smoking interfere with them. “Little things create credibility for us and allow us to reach the guys other programs can’t,” he says.

In the last 10 years, Newman says, the org has graduated 285 people who haven’t re-offended. “Our people have only known gang members, so we change what they love. We change their network. It’s like zero-sum stuff we have to replace that gang esteem with love and belonging. People have to unlearn their identity, change the script, change the audience and become new actors.”

The group works hard to shift the definitions of maleness and develop a self-worth repertoire not based on strength, cars and money. “We begin to change the box,” says Newman.

But along the way to altering the esteem system come police stops.

“Nine out of 10 officers see young people in our communities as bad. They think there’s no chance for them,” says Newman. “We find a few officers every few years who want to work with us, but then they get pressure from other officers and back off. We want collaborative communications, but we seek long-term benefits for the community – not for the police’s mandate. That puts TAVIS at odds with us. I don’t think we’re speaking the same language as them.”

Ghana-born Wendell Adjetey, who just left his post as a youth worker in the Jane-Finch anti-gang Prevention Intervention program and is now on his way to the PhD program in black history at Yale, has a similar perspective on the boomerang effect of intrusive policing.

“Police disproportionately target young black men, but you have to be very careful how you treat people,” says Adjetey. “You can’t box someone in and say, ‘We know who you are. You have braided hair, you walk with a limp, you have multiple tattoos: you must be a drug dealer.’ When you do that, you’re not giving people a choice. And the answer is, ‘I’ll go to the streets then.’ This the breaking point. The thinking is, ‘If no one cares about me, I’m going to go out with a bang.'”

Many young people, Adjetey says, adopt a macho/belligerent disposition to deter others from victimizing them. “That’s why young men carry guns, why they are quick to throw fists and insults. It’s so no one will ever test them. I’ve experienced being targeted. You develop a chip on your shoulder and become very aware of your surroundings and people looking at you in a condescending manner. You become wary of law enforcement.

“When you have a community that lives in isolation, lives under police oppression, lives in neglect because the state has forgotten about them, the children rebel against everything white society tells them to do,” says Adjetey. “To do the white thing would be to embrace the force that denies you opportunity. You would be a traitor.”

At Justice for Children and Youth, acting director lawyer Mary Birdsell has the same sense that safe, pro-social neighbourhoods aren’t possible where policing isn’t respectful. “Carding,” she says flatly, “is over-surveillance. It’s not based on monitoring criminal behaviour it’s surveillance based on categories of people. It doesn’t happen to everyone it happens to racialized youth.”

Her group was part of a successful initiative a few months back pushing the Police Services Board to insist that officers give copies of their Field Information Reports to those stopped. The board also asked that the city auditor general conduct an independent review of the race-based stats kept by police that result from carding, and that the chief monitor discriminatory practices.

“We want to make officers conscious that they are, to lots of people’s way of thinking, detaining young persons very possibly against their will,” Birdsell says.

But informing teens of their Charter rights puts them, and Birdsell, in a curious dilemma. If they act on them, they can get into nasty trouble with police.

“What the law says and what the reality is for young people are wildly different,” she says. “When they’re out on the street at night and questioned by police, do we really want them asserting their rights? What we really want is that they stay safe.

“There’s a lot of commentary by police on the desire to have communities be helpful to them,” says Birdsell. “If they treat people respectfully, don’t stop them randomly, don’t search them without a good reason and don’t violate the rights granted to them under the Charter, then people will be more likely to trust them. The problem of safety and security in areas of intense poverty is not going to be fixed by TAVIS.”

There’s no question that exposure to chronic violence can change one’s life in unpredictable ways. Before he turned 20, Lekan Olawoye, executive director of For Youth Initiative, saw a number of friends killed in Rexdale’s Jamestown, the impetus in his case for a degree in social work. He now counsels at-risk youth in Weston-Mount Dennis.

“Most young people want to do well. I inherently believe that. We try to understand their struggles,” Olawoye says. “You can say this person dropped out of school because they’re lazy or unfocused, but then you find out they have no childcare or TTC tokens or they have a learning disability. There are multiple barriers. We call it ‘intersectionality of oppression.'”

Olawoye says his organization is in dialogue with the local police division and that innovative ideas are percolating, but the difficulty comes when “you’re working with one officer and the other starts to profile. The relationship with the first is jeopardized. It’s the profiling style that dominates it damages relationships. Unfortunately, it’s the style of policing most young people have contact with.”