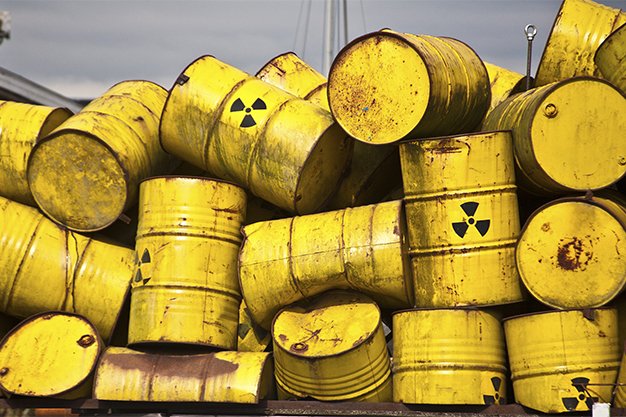 It’s strange that out of a possible million square kilometres of available land, Ontario Power Generation (OPG) pinpointed a tiny patch virtually on the shore of one of our Great Lakes – the source of drinking water for millions – for an underground nuclear waste dump.

Federal Environment Minister Catherine McKenna is among those demanding more information about OPG’s push for a deep geologic repository (DGR) 680 metres into limestone bedrock just over a kilometre from the edge of Lake Huron on the Bruce nuclear site at Kincardine, Ontario. McKenna put the brakes on the project last month asking for, among other things, consideration of alternate locations.

The delay gives opponents a chance to catch their second wind in their 15-year campaign against a project Kevin Kamps of the Washington-DC-based Beyond Nuclear says “is risking poisoning the great lakes” and is seen as a forerunner of future nuclear waste burial schemes in Ontario.

The power unleashed by splitting uranium atoms contributes more than half of Ontario’s electricity. But it also produces waste that will emit destructive radiation for the next million years.

OPG, the Crown corporation that operates 18 of Canada’s 19 nuclear reactors, would like nothing better than to make that legacy disappear.

Low-, intermediate- and high-level nuclear waste has been piling up for 40 years, much of it sitting in a storage facility at Bruce since 1974. The most toxic waste, largely spent fuel rods, lies cooling in swimming pools on reactor sites, awaiting a permanent storage solution.

If the DGR does get built, 400,000 cubic metres of low- and intermediate-level waste, including what’s coming from the Darlington refurbishment, will get a new, approximately $2 billion home.

But one question opponents say still hasn’t been properly answered is why.

“There’s no good rationale or need for the project,” says Theresa Mc-Clenaghan, executive director of the Canadian Environmental Law Association.

Around the world, deep burial sites are reserved mainly for high-level waste, leaving the rest stored on or near the surface. Opponents say the waste slated for the Bruce DGR is the kind a person can stand next to without risking much of a dose.

“It’s like taking the garbage we have in our kitchen and spending a billion dollars on a high-tech mausoleum to protect it for all eternity. It’s overkill,” says Frank Greening, a former senior research scientist at Ontario Hydro, the predecessor of OPG.

The apparent over-design has some fearing that OPG’s DGR mandate could evolve: once the -facility earns its stripes managing lower-toxicity waste, OPG could apply to invite in the really dangerous stuff.

But Jeremy Whitlock, communications director for the Canadian Nuclear Society, says the DGR is intended to do no more than meet the need for long-term stewardship.

Very long-term stewardship, that is.

“You could have a glacier move over the land and shear off all these institutional things we’ve placed here, and it would retreat again after thousands of years but the DGR would still be there,” says Whitlock. “It might be the only thing we build that survives.”

Many opponents don’t buy the permanence argument, especially since every DGR built to date has failed.

The 15-year-old Waste Isolation Pilot Plant in New Mexico sprang a radiation leak in 2014. It propelled radioactive particles through a ventilation duct to the surface, contaminating 21 workers. The cleanup could take years and cost as much as $1 billion.

In Germany’s Asse Mountains, a DGR containing 20 Olympic swimming pools’ worth of nuclear waste built into a former salt mine was found flooded with radioactive brine in 2008, its walls collapsing. Cleaning up the site risks even further contamination and could take decades.

“Maybe we should take a lesson from that and say, ‘Let’s not rush into something that every other nation on earth has so far failed to do,’” says Gordon Edwards, president of the Canadian Coalition for Nuclear Responsibility.

Yet OPG has been working toward the DGR since 2001.

Though OPG officials were not available to comment for this article, the main reason given in the past for the Crown corporation’s commitment to the project has been that Kincardine asked for it.

The town wanted to host a long-term, socially responsible storage solution, one that would do away with the waste permanently so as not to burden future generations. The proposed DGR is expected to be closed and backfilled by about 2062.

Kincardine already benefits from its willingness to host. In 2004, area municipalities signed on to an agree-ment with OPG that nets them $35 million over a period of years as long as they continue to support the project.

With no successful operating DGR anywhere in the world to observe, opponents say too many uncertainties remain, including what will happen in the deep underground caverns during the abandonment phase when the dump is no longer monitored.

“Final disposal really means that it is final – it has to be so safe that you can’t even monitor it,” says Erkki Palonen, senior vice-president of Posiva, Finland’s OPG equivalent.

Posiva was recently awarded a construction licence by the Finnish government for the world’s first high-level waste repository, to be built in Olkiluoto, on Finland’s west coast.

“Once it is so deep, there is no means to even find the place by monitoring, because even the background radiation level of normal bedrock creates more radiation than any of these wastes do from that depth.”

Opponents challenge that certainty. One thing you can pretty much count on is that the waste will outlive the containers, says Brennain Lloyd, project coordinator of Northwatch.

Then, if there is a failure of all the barriers, the radionuclides will out-migrate, she says. But to where is unknown.

Notwithstanding the waste problem, Ontario’s nuclear industry continues to promote a nuclear renaissance, even as public acceptance of nuclear is hobbled by accidents like Fukushima’s five years ago.

But even if all reactors shut down tomorrow, there’s no turning away from the toxic mess already on the ground. If a DGR is the best idea society can come up with for handling the worst of the waste, we’d better hope the technology can stand up for eternity.

“If not,” says Kamps of Beyond Nuclear, “our waste will be the toxic burden of near endless generations to come.”