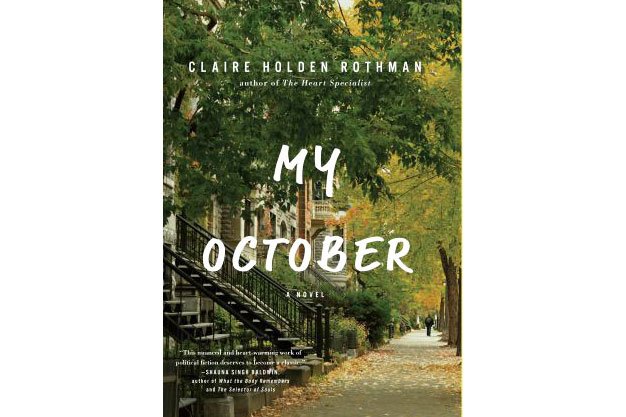 The perils of being the spawn of famous Quebec nationalists is a big literary deal this year. Heather O’Neill got a Giller nod for The Girl Who Was Saturday Night, about twins of a popular troubadour. And Claire Holden Rothman’s take on the theme – nominated for 2015 Governor General’s award – tracks the fractured family of a notable separatist author.

Rothman’s book is way more earnest. Where Saturday Night’s twins are deep into sex, drugs and rock ‘n’ roll and seem not to give a fuck about much else – except each other – My October looks more deeply into issues of identity and personal independence.

Novelist Luc Lévesque and his Anglo wife, who translates his books, can’t figure out what’s going on with their 14-year-old son, Hugo. The school authorities have found a gun – not loaded – wrapped up in his locker. Sullen and monosyllabic, Hugo’s not sharing much.

But one thing’s for certain: he’s not carrying his father’s separatist torch. In fact, he considers the FLQ right up there with al Qaeda in terms of terrorism – the book is set in Montreal just after 9/11 – and wants to know more about his maternal grandfather, who famously prosecuted members of the FLQ.

Holden Rothman skilfully weaves chapters told from the point of view of her three main characters to probe Luc’s mid-life crisis (he’s dreading turning 50), Hannah’s ambivalence about her Anglo roots and Hugo’s determination to explore them.

But the author definitely cheats in the final pages, creating a situation that could occur only if her characters were to change dramatically in almost every way. I’d buy it, but not if the writer won’t show me how that happened.

My October is a very absorbing read, mainly because Hugo is so inscrutable and seems like he could do something dangerous at any time. He also represents what we fear most as parents – that we will raise a child who scorns our basic values.