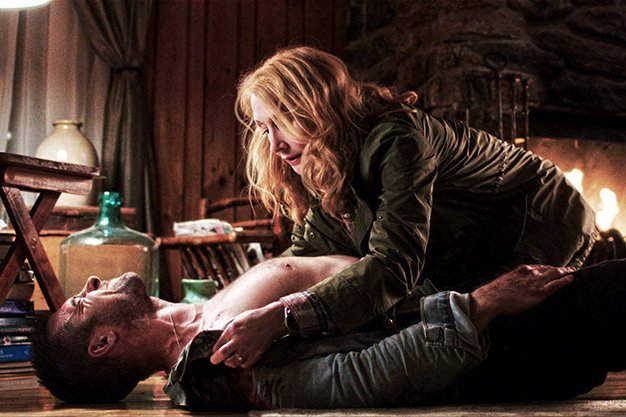 A great performance by Patricia Clarkson – so what else is new? – can’t save this strange thriller.

Clarkson plays Helen, a recently widowed doctor, who gives medical attention to a man with a gunshot wound (Scott Speedman) when he washes ashore near her remote cottage.

The shooter, who wants to finish the job, is bearing down on Helen’s doorstep – or, rather, dock.

This is supposed to be director Ruba Nadda‘s study of a grieving woman in a heightened emotional state responding to a dangerous situation. But regardless of the context, Helen’s reactions, even if she is a committed physician, make no sense. And the final scene strains credulity.

The film is shot with a lot of intense close-ups and there’s plenty of mood – doors slamming in the wind, dark skies creating a sense of foreboding. But it’s all for naught. You know exactly what’s going to happen during the not so climactic confrontation.

This is a disappointing step backwards for the director of Sabah and Cairo Time.