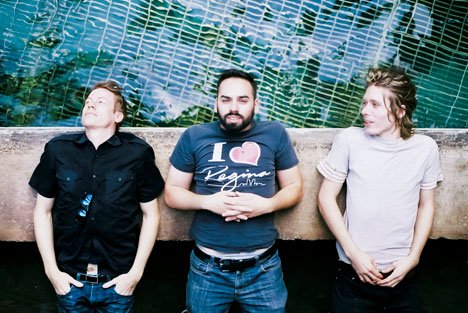 Odonis Odonis have a leg up on many of the other young bands in Toronto’s underground music scene.

For the recent release of their debut album, Hollandaze, they secured a deal with prominent UK label Fat Cat Records, and it’s already secured them some invaluable overseas press and a pretty extensive touring schedule.

At home, however, they’ve decided to do things a bit lower key. Maintaining their independent ties, the band is releasing the album in Canada as a split between three small local musician-owned labels over three different formats: CD on Daps, vinyl on Pleasance and cassette on Buzz.

“When I was first starting out with this band, it felt like the Toronto scene was fractured,” says Dean Tzenos over coffee at Sonic Café in Chinatown (near Kensington Market). “This is sort of an attempt to bring it together.”

Tzenos recorded Hollandaze and its in-the-can follow-up Soft Boiled, Hard Boiled on his own in a creative spurt shortly after becoming unemployed, but had no conception of how he wanted to put either of them out.

“At first I was thinking ‘I want to start my own label,'” he says. “But then everybody seemed to start a label. We’re trying to bring people together under one record, instead of breaking everything off into more tiny fragments.”

Odonis Odonis’ bassist, 22-year-old Denholm Whale, co-runs Buzz Records, one of the record labels putting out the album. Whale and his label partner Erik Jude share a house on Cecil Street, and for the last year it has served as Buzz’s headquarters, while their garage has become an unconventional concert venue.

A haven for everything from punk to noise to indie rock, the show space (dubbed The Garage) has served as a social and musical hub for many of Toronto’s young bands. It’s purposely kept somewhat under wraps, but since its inception it has served as the location for some excellent off-the-radar showcases for buzz-heavy local bands like Moon King, Doldrums, Rituals, Rattail and Hooded Fang. It’s also hosted many “secret” second shows and afterparties for touring punk bands.

“That’s where we saw our shows, brought a lot of bands in and got a feel for a new community and a new vibe,” says Whale. “It’s where we run our label, but it’s got an open door policy, and its DIY mentality has led a lot of like-minded bands and fans to play, rehearse, film videos and just hang out there.”

Given the sheer size of Toronto and its arts community, it’s logistically impossible to unite everyone, but there’s a definite community emerging around a number of trashy, dark, psychedelic and slightly off-kilter bands like Odonis Odonis, Mausoleum, METZ, Hussy and Hut (to name a but a few) that hearken back to the ear-abusing sounds of the ‘80s and ‘90s indie underground.

“I’ve read in some of the reviews, writers will say ‘I didn’t know Toronto was known for any noisy or lo-fi stuff'” says Tzenos, alluding to Hollandaze’s hazy, surreal mix of surf, shoegaze, noise and pop. “That’s funny because there’s tonnes of that stuff here. We’re just one of the first getting international press for it. If you were to put a microscope on the city, you’d see that the overall vibe of a lot of music is getting darker and spookier.”

In a way, Odonis Odonis are acting as ambassadors for their music scene as they tour extensively outside of their hometown.

“Playing throughout the U.S., we noticed that Toronto’s community seemed kind of remote,” says Tzenos. “I think that’s partially because it’s so fragmented that people only hear about bits and pieces of it.”

“Montreal gets romanticized way more as a music city, but there’s just so much going on here. There’s a real hustle and vibe to the community that a lot of people don’t get to see. Our goal is to bring that together and force it outwards.”