Of Mice And Morro And Jasp 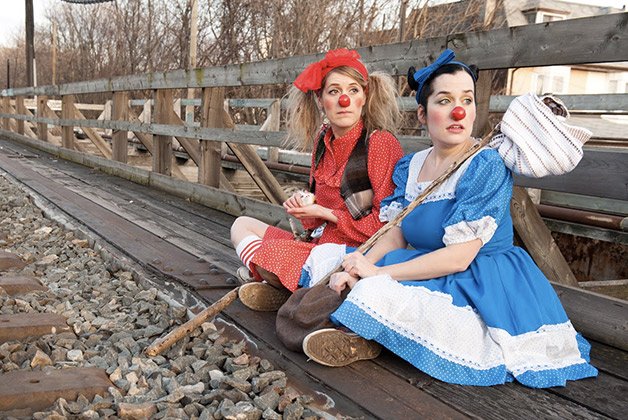 What happens when clowns play with potential tears rather than laughs?

That’s what the team responsible for the hugely popular clown sibs, Morro and Jasp, performers Heather Marie Annis and Amy Lee and their director, Byron Laviolette, decided to explore a few years ago.

The troupe endeared themselves to young audience with their first few shows in the Toronto Fringe before moving into more adult fare with Morro And Jasp Do Puberty, Morro And Jasp Gone Wild and Go Bake Yourself. The last show won a Dora for outstanding ensemble performance.

“We thought about tackling a classic tragedy, about going in a totally different direction,” remembers Annis. “It was a way to challenge ourselves to see if we could enter into that territory with clown and see how far we could push it, how real a clown’s emotions work within that genre.”

“It also seemed like an easier way for the group to create a show, using an existing story,” adds Lee, “since we were writing Go Bake Yourself the same year for the 2012 Next Stage Festival. We didn’t have a lot of time to create a new script for that year’s Fringe.”

“Easier,” she repeats and laughs with hindsight. “No, it was the hardest and most challenging thing we could do.”

Various two-hander possibilities presented themselves to the company, including Edward Albee’s The Zoo Story, but they settled on John Steinbeck’s Of Mice And Men, whose central characters are the big, slow, childlike Lennie and the wily, protective George. Trying to survive during the Great Depression, they start to work on a ranch and dream of life on their own farm, raising rabbits. The pair faces a tragic dilemma when Lennie accidentally kills someone and George must decide what to do.

“The story deals with the choice between hope and despair,” says Laviolette, “and we wanted to investigate it with the destructive Morro and the controlling Jasp, who don’t in their narratives always win in the way they want to.

“But it’s also about living and trying to work with nothing, which is the case with many artists. Many people are just trying to get by and make art happen. That idea about survival offered us a fascinating parallel between Morro and Jasp and Lennie and George.”

The setting is now not a farm but rather a carnival, where the two clowns put their skills to use telling the Steinbeck tale with a few twists.

The artists worked on the show with John Turner (Smoot, of Mump and Smoot) at his Manitoulin Island Clown Farm. They actually heard about their Dora win while doing its first run, thanks to text messages.

A hit at various Fringes, Of Mice And Morro And Jasp returns with what Annis calls “a space to breathe a little more. There’s no time limit now, as in the Fringe.

“That means we don’t have to rush it for the audience, to give them their moments,” continues Laviolette. “Mice is the maturation of what we discovered in Go Bake Yourself, that we are putting on a play for an audience that wants to interact with us. We’re constantly amazed about how people care about what Morro and Jasp do, that these two fictional characters have become real in their lives.”

What about the tragic ending in the original?

“It was a big discussion for us,” says Lee, “like putting together a puzzle to figure out why we were telling this story. While there’s a message of hopelessness and despair in Steinbeck, can the innocence that’s part of Morro and Jasp create a different kind of ending?”

You can expect moments of laughter and, if not quite tears, some welling-up during in the show.

Annis performed solo in By A Thread and just wowed audiences in Scheherazade at The Next Stage, while Lee played the lead role in Hana’s Suitcase. Laviolette’s worked with The Mission Business and just finished his PhD in theatre at York.

Probably not by coincidence, his thesis is on interactive theatre and “the strategies that can be used to get an audience to share with and trust you. It’s about play and risk on both sides, so that the audience becomes a co-creator for significant parts of a show.”

No surprise that’s what defines a Morro and Jasp production.