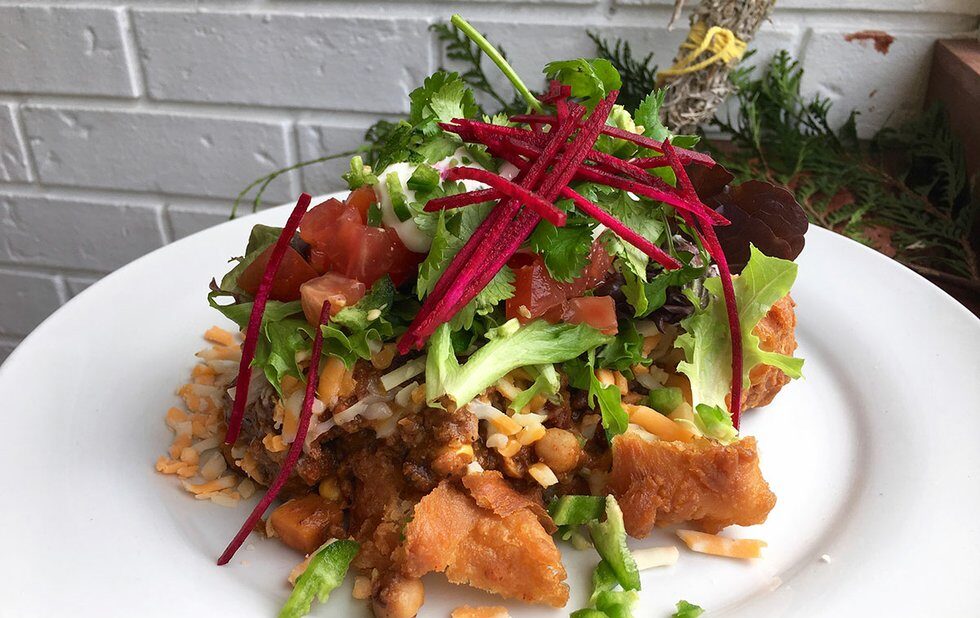 I have questions for Shawn Adler, owner/chef of the Pow Wow Cafe, but as we stand by the service counter chatting, we’re interrupted by customer after customer appearing in the doorway of the tiny Kensington Market kitchen. I should note that this was only the café’s fourth day in business.

That morning, Adler and his tacos, built on Ojibway bannock, or frybread, were featured on CBC-TV, and word (as it does whenever a brand-new food item appears on any table anywhere in the GTA) travelled fast.

Adler’s tacos are $12, and as a few customers learned that day, you only need to order one. His rendition of the classic pow wow snack is more akin to a platter-sized salad built on a softball-sized lump of frybread, which assumed its place in First Nations culture when the Canadian government began issuing rations of ingredients like white flour and lard. “It’s kind of like a savoury apple fritter,” the chef explains.

He cubes the bread with a cleaver right out of the deep fryer, then piles it with beef or veggie chili (or, for a non-traditional twist, jerk chicken or smoked pork shoulder) and loads on toppings until the tower threatens to topple.

At the register, one diner identified himself as Cree and cracked good-naturedly: “This was a pretty good frybread taco, for an Ojibway guy.”

That’s not surprising: Adler is a veteran chef with a half-dozen culinary enterprises past and present under his belt. Though his name may be unfamiliar to Toronto diners, he currently runs two spots in Eugenia, near Collingwood (the Flying Chestnut Kitchen and County Burger), as well as a novel tasting-menu spot in Peterborough called Bezhig.

If you’re a local music lover, you might already have stumbled across Adler’s cooking: His Flying Chestnut Kitchen food truck was a staple on the festival circuit this summer. “Things like TURF (Toronto Urban Roots Festival) – people would be there Friday, Saturday, Sunday and only eat our tacos. People would say, ‘I’m not eating anywhere else,’” he says. “I did so many festivals where people were like ‘Where can we get this?’” 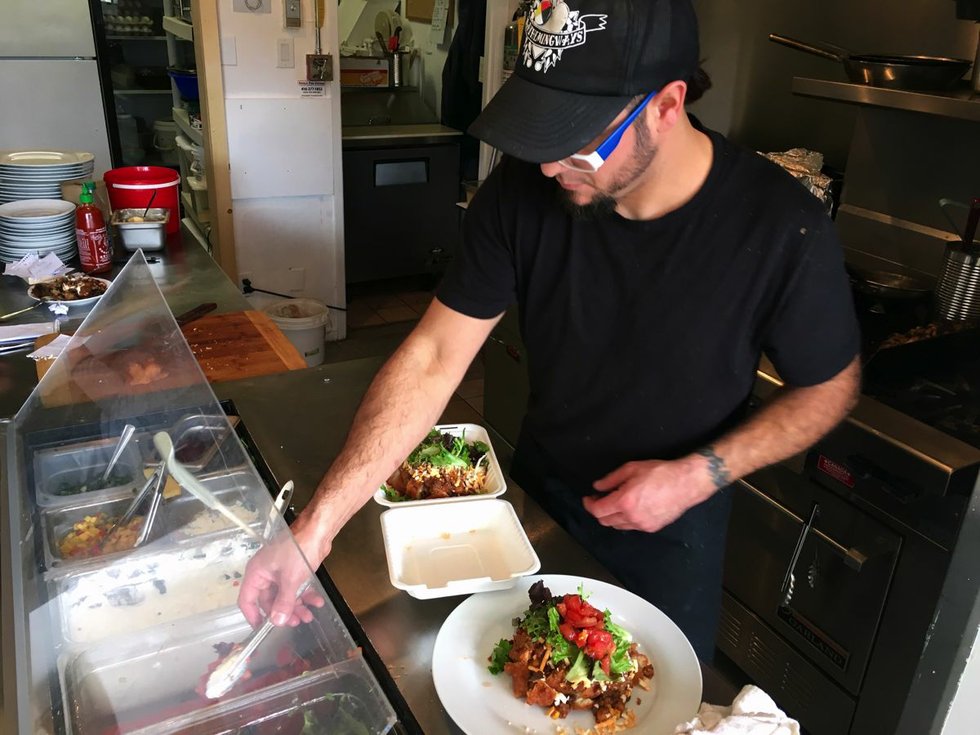 Chef Shawn Adler doles out toppings behind the counter.

Before Adler opened shop, the only place in Toronto to point these seekers to would have been Tea n Bannock, a First Nations-staffed café on the east side that offers bannock tacos and other pow wow eats like fried canned meat and corn soup.

“We’ve had people walking in here like, ‘So who’s Indian here? Who’s Ojibway?’” Adler says. “The public doesn’t want, you know, some white guy to come in and exploit an Aboriginal thing.”

Does he feel like that might someday be in the cards, if the visibility of First Nations food keeps growing? “Good question – I really don’t know,” he says. “I don’t think it’s gonna be the next taco craze. Like, this is the [era] of the taco – there’s Wilbur, Seven Lives, La Carnita – but I don’t think people are going to jump on the Indian taco train and have it become a trend.

“But I don’t want to box myself in either,” he continues, adding that Pow Wow’s other raison d’être, its brunch menu, is a mostly straight-up mix of frittatas, sweet potato pancakes and pork croquettes, along with two egg-and-frybread dishes. Right now he’s selling handfuls of tacos for every brunch dish.

“But I’m not concerned at all,” he chuckles. “I’m very happy to sell tacos – I was putting the brunch in there as, like, a safety net.”

What else does he want to try? Adler rattles ’em off: “I wanna do an ‘Indian Indian taco’, like butter chicken on frybread,” he says. “Curry goat would be amazing. Any kind of stew would be good – beef bourguignon, coq au vin.

“Anything on top of frybread is gonna be good.”